A WORLD OF EMOTIONS at Onassis Cultural Center: Review By Polly Guerin 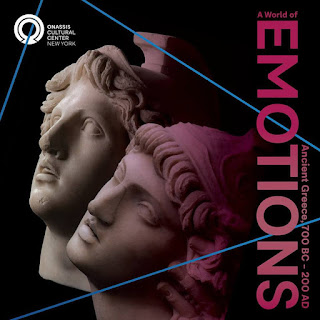 WHY DO EMOTIONS MATTER?  Life would  be pretty dull without emotions that  penetrate every aspect of our lives, they are the background of every form of art and literature and are interwoven with memory, attention, cognition, and decision. Emotions are such heady stuff that they determine our interpersonal relations, our private life, the public sphere, and religious worship.
Perhaps we need more emotion in our lives, let's see how the ONASSIS CULTURAL CENTER'S stunning ancient Greek masterpieces bring emotions to the fore in a groundbreaking exhibition, A WORLD OF EMOTIONS Ancient Greece, 700 AD-200 AD on view through June 23, 2017, Free admission and public programs, Onassis Cultural Center New York, 645 Fifth Avenue at 51st Street.
Image Right Features two heads: The Head of PENTHESILEA Marble, Roman copy of a Hellenistic original. (c) Antikenmuseum Basel und Sammlung Ludwig. Second head ACHILLES, Marble, Roman copy  of a Hellenistic original. (c) Antikenmuseum Basel und Sammlung Ludwig.
The exhibition brings together more than 130 masterpieces from world-renowned museums including the Acropolis Museum, the National Archaeological Museum Athens, the Louvre, the British Museum, the Vatican museums and many more opening pathways to a wide world of unending, conflicting, universal emotions. A World of Emotions explores the ideas and attitudes of people in classical antiquity toward emotion and the ways in which the emotions are depicted, revealing how some are strikingly familiar to us and some shockingly alien.  It features vase paintings, sculptures, theatrical masks, amulets, coins, and votive offerings, among other artifacts, many on view in the United States for the firs time, and some for the first time outside of Greece. 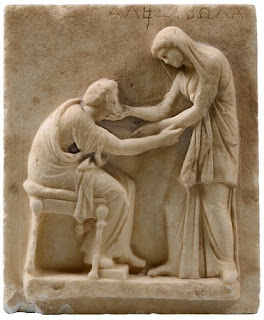 Angelos Chaniotis, Professor of  Ancient History and Classics, Institute for Advanced Study, Princeton wrote: "Emotions have a particular significance for Greek Culture. Greek  theorized emotions as early as the 5th century BC.  Emotions were personified and worshipped as divinities. The very first word of Greek (and European) literature describes an emotion: menis, "anger."  Emotions are manifest in every expression of Greek culture, in institutions and society, drama and poetry, rhetoric and history, art and philosophy." Image Left: Funerary Stele, Marble, early 3rd century BC, from the Cemetery of Ancient Thera. Archaeological Museum of Thera (c) Hellenic Ministry of Culture and Sports--Archaeological Receipts Fund. Photography Kostas Xenikakis.
Think upon this: According to Aristotle's definition, tragic plays had a surging effect on spectators by arousing fear and compassion. The tragic poets drew their subjects from the passions of larger-than-life figures such as Euripides' Medea with themes of love, betrayal, jealousy, anger and revenge,  which become part of the world's cultural heritage. The myth of Medea inspired six operas, the best known being Luigi Cherubini's Medee of 1797. Maria Callas played this part in her only film role, in Pier Paolo Pasolini's Medea of 1969.  Presented on the theatrical stage, myths triggered fear and empathy that led audiences to catharsis, which according to Aristotle was the defining goal of tragedy.
Professor Chaniotis adds: "This exhibition presents an itinerary into a world of emotions. It confronts the visitor with question of timeless value: What were the means with which ancient artists represented emotions. How did images and texts arouse emotions that still resonate with a modern audience. 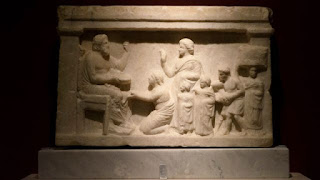 A World of Emotions is the kind of exhibition that provides a timely opportunity to think about the role of feeling in our own personal, social, and political lives, and prompts questions about how we express control, manipulate or simulate feelings. Image Right

A marble votive relief of Greek mythology hero
Zeus from 340 BC.
The exhibition is accompanied by a fully illustrated catalogue of essays, available for purchase  at the Onassis Cultural Center New York.   Contact info: www.onassisusa.org/emotions.
Ta Ta Darlings!!!  This exhibition gives me cause of express my emotional reaction: Don't MISS this opportunity to revisit the Greek classics and immerse yourself in the emotional thrill  of seeing some Greek antiquities on view for the first time in the US.  Fan mail welcome at pollytalknyc@gmail.com. Visit Polly's Blogs on www.pollytalk.com, and n the left-hand column click on the subject that resonates with your interest on visionary men,  women determined to succeed, the fashion historian and poetry.
Posted by Polly Guerin at 10:49 AM