TRANSFORMATIONS AND MODERNISM IN THE BIG APPLE(c) By Polly Guerin 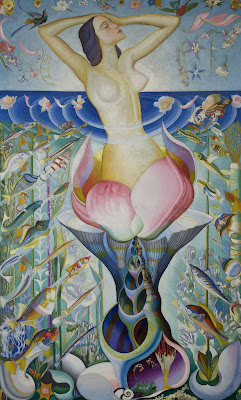 Youth & Beauty, Old Art in New Places and Modernization capture the spirit of culture and intellect in the Big Apple this week. It’s the Best in New York, my friends, the very best in new galleries and musems. Here’s the scoop!!!
YOUTH and BEAUTY: ART OF THE AMERICAN TWENTIES at the Brooklyn Museum presents the first wide-ranging exploration of American Art from the decade called Art Deco marked by the aftermath of World War I through the onset of the Great Depression followed by World War II. American life was dramatically transformed in those years and American artists like Edward Hopper, Charles Demuth, Romaine Brooks and Paul Camus responded to this dizzying modern world with works that embraced a new brand of idealism. Image left: The Birth of Venus (1925) by Joseph Stella, American, born Italy. Influenced by industrialization, mechanization and materialism they produced figurative art that melded uninhibited body-consciousness with classical ideals. http://www.brooklynmuseum.org/. At 200 Eastern Parkway, Brooklyn, New York. Through January 29, 2012.
LUMINOUS MODERNISM: Scandinavian Art Comes to America, 1912/2012 features 47 works by some of the foremost Nordic artists working at the turn of the 20th century with special film screenings. World renowned director Ingmar Bergman fell in love with Faro, the landscape which became the hallmark of many of his films. Two documentaries portray a complex, understated and loving portrait of his tiny island on Wed., Nov. 2 at 6pm and Fri., Nov. 4, 6:30pm. $10 ($7 ASF Members). On Wed., Nov. 9, 6pm view a biographical drama about the famous painter, Edvard Munch, from his childhood to his adult life, with in-depth studies of the influence of persons and surroundings that made his paintings. $10. At Scandinavia House, 58 Park Ave. @ 38th St. www.amscan.org.
MODERNIZING THE NATIONAL ACADEMY MUSEUM AND SCHOOL emerges with less stuffy museum spaces, airier with new track lighting and more picture-friendly. Several temporary exhibition through December 31 include salon-style portraits from the early 19th century in “The Artist Revealed: A Panorama of Great Artist Portraits”; 100 American paintings from the permanent collection and the later-career retrospective “Will Barnet at 100. At the entrance way the gift shop has been removed allowing visitors to sweep right into the galleries. At 91st Street & Fifth Avenue. www.nammuseum.org.
NEW GALLERIES FOR THE ART OF THE ARAB LANDS, TURKEY, IRAN, CENTRAL ASIA AND LATER SOUTH ASIA reveal a renovated and expanded suite of 15 galleries to house the permanent collection of the Department of Islamic Art which had been removed during a eight-year construction project. The galleries showcase some 1,200 works spanning more than a thousand years including breathtaking carpets, illustrated manuscripts (bring a magnifying glass), textiles, jewels and the sumptuously ornamented Damascus Room, built in A.H.1119/1707A.D. , one of the finest examples of Syrian Ottoman reception rooms from the house of an important and affluent family. Opens Nov. 1st. www.metmuseum.org.
Ta Ta darlings!!! Youth and Beauty, Art of the American Twenties was breathtakingly enchanting. Don’t miss it! Fan mail welcome at pollytalk@verizon.net. Visit Polly’s Blogs at www.pollytalk.com and click in the right-hand column to access the Blog of your interest including http://www.amazingartdecodivas.blogspot.com.

Labels: Luminosity, Modernisim of the Twenties, Modernizing the Academy