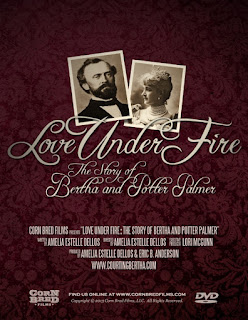 While retail theater on television is currently celebrating the rise of the department store, viewers would be served better to know that the true story of the man you brought retailing to the pinnacle of showman ship was Potter Palmer. He was the creator of what we now know as the modern department store. (It was not Marshall Field or Harry Selfridge) Palmer ranks highest among the remarkable visionaries who made shopping an adventure and entertainment destination. However, he was more than just a merchant king he also gave Chicago, the grand Palmer House Hotel and many other ‘firsts’ including introducing impressionism to the United States. RETAIL ORIGINS Palmer invented many of the retail practices we take for granted today. He was the first captain of the merchant class to allow women to exchange merchandise. He created the motto, “the customer is always right,” originated a liberal credit policy, opened the bargain basement concept and last but not least installed dazzling window displays. A man ahead of his time, Palmer hired one of the first female architects to construct a building for the World’s Columbia Exposition in 1892. Bertha Honore, Palmer's wife, was a remarkable woman who shares in the limelight of historical significance in the legacy of the Palmer saga.
LOVE UNDER FIRE Such a story is worth historical reverence and to this end Corn Bred Films has set the record straight about the lives of Bertha and Potter Palmer, one of the first and foremost power couples in the United States. Corn Bred film’s new 30 minute documentary film, LOVE UNDER FIRE, tells the epic love story between young socialite Bertha Honore and Potter Palmer, a self-made man twenty years her senior. Their passion for Chicago, the city they loved is a riveting saga that reveals more than meets the eye. PALMER ARRIVES Potter Palmer came from upstate New York and was interested in retailing. He stopped off in Chicago a burgeoning Midwest town with mud roads but a growing community. Palmer saw opportunity and decided he wanted to be part of the city and prospered in real estate and retailing. At one point Palmer reached an elevated level of business social success, and when he was thirty-eight years old he was worth millions of dollars, a fine catch to say the least. Due to Palmer’s social ascendancy, he was invited to dinner at the home of real estate maven, where in her father house; Palmer met thirteen year old Bertha Honore, which would forever change his life.
PALMER HOTEL Bertha Honore was a remarkable woman, determined to succeed and did so when years later she married Potter Palmer. Palmer was a man of grand gestures and he built the Palmer Hotel as a wedding present for his bride. During the raging fire that destroyed Chicago in 1875 and the Palmer Hotel, Bertha seemingly rose from the ashes, a woman of great fortitude. She was the first woman to appear before Congress to petition the government for funds, and traveled throughout Europe, influencing royalty and industrialists. Palmer let Bertha shine in the limelight. She continued to be a great supporter of women’s education, wages and working conditions. This powerful couple’s story is breathtaking and illuminating as to how two people forged a legacy that makes them important figures in the historic documents of our country’s evolution into a great nation.

TO ENJOY THIS REMARKABLE STORY OF THE PAlMERS AND TO PURCHASE A COPY OF THE LOVE UNDER FIRE DVD CONTACT www.courtingbertha.com. Or call 708.359.2783,