On Thanksgiving it has become my tradition to revisit Truman Capote’s 1956 short story, “A Christmas Memory.” This nostalgic story with its riveting sentimentality has been made into TV specials, radio plays, an opera and now just when I thought that that was the end of its production life, a new musical, “HOLIDAY RECALL,” makes its debut at the DR2 Theatre in New York City.
CAPOTE'S CHRISTMAS MEMORY: The story itself, one of Capote’s earliest works, is rather biographical. It tells the story of a young boy named Buddy, whose parents are off on some travels or other entertainment, In the film version, Buddy has returned to the Alabama house where he spent the happiest part of growing up with his cousin and best friend, called Sook.  In the movie, she was brilliantly portrayed by Geraldine Page, who evokes the character as a simple, country folk woman in her house dress and apron, the kind of woman you might find in a farm house kitchen.
FRUITCAKE PARTNERS: Together these unlikely companions spend most of their activity engaged in their pre-Christmas ritual discussing and making fruitcakes.  They count their pennies that were stored in a jar under the bed and determine that they just had enough to purchase the ingredients and moonshine. With a rickety old baby pram as their article of conveyance they triumphantly walk off from the modest farm house to the village to purchase the condiments. The highlight of their tour is a visit to HaHa Jones, the moonshine purveyor, a man whose Native American Indian ancestry superimposes on his personality. He is a rather scary character, especially to young Buddy.
CELEBRATING DUO:This pair of unlikely characters end up in the farm house kitchen making numerous fruit cakes and carefully wrapping them, and sending them off in the mail addressed to assorted friends, random acquaintances and even dignitaries.  The making of the cakes is a happy occupation and with the last bit of moonshine left in the bottle Sook and Buddy celebrate.  Sook, however, makes the grave mistake of giving Buddy just a wee bit of the moonshine, and that is when Sook’s two haughty sisters in their finery arrive to scold Sook for serving alcohol to Buddy. With the inevitable serious consequences, Buddy is banished to military school and Sook is bereaved by the lost of the one dear friend she ever had. This is an uncanny relationship that tugs at your heartstrings and I wonder--- "Wouldn't it be wonderful, wouldn't it make a difference, for every lonely young child to have a person like Sook in their young lives!"
However, before the end of the film, Sook and Buddy spend one last Christmas together. They both secretly, make kites for one another, but life for Sook would never be the same, a few letters arrived from Buddy but that was short lived and sadly Sook passed away shortly afterward.
HOLIDAY RECALL Sorry, to be so verbose, now back to the musical, Holiday Recall. Alice Ripley, “Neck to Normal,” tony winner plays Sook and Buddy is played by Ashley Robinson According to a review of the musical by Vincentell in the New York Post, the shows fragile charm comes through best in numbers like “Mighty Sweet Music,” in which all seven cast members take up ukuleles.Vincentell says, “With musicals, as with gifts, the best things come in small packages.” Efficiently directed by Charlotte Moore for Irish Rep, the show has nostalgia layered on top of nostalgia. Your in for a treat!!! At the DR2 Theatre, 103 E. 15th St. Shows are scheduled through January 4th. .Ticket info 212.727.2737.


Ta Ta darlings!!! PollyTalk is off to Holiday Recall this weekend to see my favorite film, now a musical. Fan mail welcome at pollytalknyc@gmail.com. Visit Pollytalk’s Blogs on www.pollytalk.com and click in the left-hand column for the Blog of your choice on fashion, amazing women, remarkable men, hidden treasures or poetry
Posted by Polly Guerin at 4:47 PM No comments:

HOLIDAY INN and WHITE CHRISTMAS: A SONG TO REMEMBER By Polly Guerin 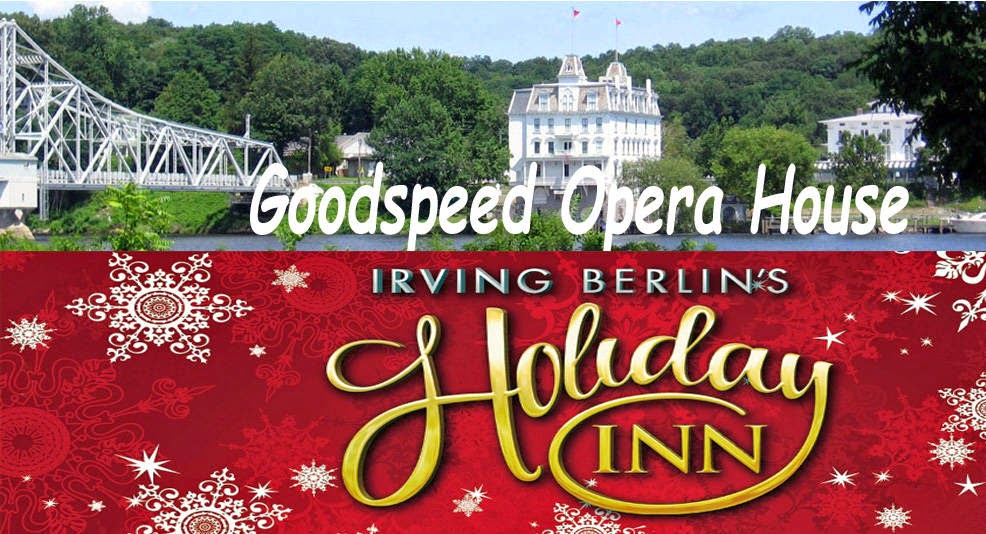 There’s more than a White Christmas in the staged production of the musical, “Holiday Inn,” currently at the Goodspeed Opera House in East Haddam, Connecticut.  New York is also getting its share of nostalgia in movie theaters this week, and just in time for the holidays when the film White Christmas, inspired by the song, will be shown by Fathom Entertainment in theaters around town.
Irving Berlin’s deeply sentimental timeless classic, “White Christmas” was the first time a song inspired a movie. It was called, “Holiday Inn,” and brought about the first pairing of Bing Crosby and Fred Astaire, yet Astaire would come at a high price. As a concession to satisfy the studio, they agreed to cast lackluster (Really!!!) leading women, virtually unknown: Marjorie Reynolds and Virginia Dale.  Here’s the scoop!!!
In the winter of 2013, Universal Stage Productions, the theater division of the renowned motion picture studio, invited the Goodspeed Opera House, the quintessential producer of musicals, to be the development home of the stage adaptation of the wonderful tuneful film. By the way, be assured you are in for a treat, Goodspeed knows musicals better than any other in the world.
PollyTalk can attest to that!!!  I recently saw Goodspeed’s production of  “Holiday Inn” on their jewel-box stage and I was transported to the fictional town of Midville, Connecticut, yet the production felt like a full-scale Broadway show. This jolly romp and spirited cast of very talented, high kicking performers, gave an energetic and memorable performance that really set the tone for the holidays, while the singers regaled us with sentimental charm.
According to Joshua S. Ritter, Goodspeed Education & Library Director’s program notes, “Our  quaint surroundings share some resemblance to the Connecticut sanctuary sought by Jim Hardy (Bing Crosby) in Holiday Inn.” Of course, dear readers, Mr. Ritter  is referring to East Haddam, a gem of a storybook town itself. What better place for Holiday Inn?
The Goodspeed production of Holiday Inn has been produced with original format, and in addition to the memorable White Christmas,  several scenes include the celebration of major holidays with all time favorite Berlin songs including: Let’s Take an Old Fashioned Walk; I can’t Tell a Lie; You’re Easy to Dance With and Be Careful, It’s My Heart---all featured in Goodspeed’s Holiday Inn.
*****For HOLIDAY INN: Contact Goodspeed Opera House Box Office, 800.873.8668 for a schedule of performances through December 28 and there is an additional matinee on December 22 at 2 PM.  Or boxoffice@goodspeed.org.
About Goodspeed: The Goodspeed Opera House had endured as a majestic presence on the Connecticut River since it was built in 1876 by William H. Goodspeed, a shipping and banking magnate and avid theater lover. Goodspeed’s history goes back to its opening night on October 24, 1877, when a repertory group presented the comedy Charles II and the farces Box and Cox and Turn Him Out. It is interesting to note that featured performers of the day were brought to East Haddam by steamboat, many directly from theaters in New York.  Goodspeed’s roster of musicals continues throughout the year. Follow their show schedule on goodspeed.org.
******For Theater and Schedules for the film White Christmas contact fathomevents.com
Ta Ta darlings!!! Fan mail welcome at pollytalknyc@gmail.com. Follow PollyTalk on www.pollytalk.com and in the left hand column click on the Blog that interests you on fashion, remarkable men, hidden treasures or poetry. Cheers!!! Very best wishes for a very Happy Holiday, Hanukkah and May the New Year be your best yet!!!

Posted by Polly Guerin at 5:38 AM No comments:

There's magic in the making at the Bartow-Pell Mansion Museum in the Bronx where the museum's highly-popular Storybook Christmas Trees, nine trees altogether, are inspired by children's books and decorated by New York City,Westchester and the Bronx interior designers.
The season's festivities start this Friday, December 5th with the traditional holiday luncheon when guests can indulge their holiday pleasure looking at the lovely trees and browsing for gifts and home-baked goods at the holiday shop (stocked as usual with the help of Kensington Papers.
That evening the holiday romp continues with Holiday First Friday, music and the convenience of the Bronx Trolley, which makes a continuous loop from the #6 Pelham Bay subway station to Partow-Pell mansion.
Then, too, let's not forget the Saturday night Holiday Party when it's time to celebrate in style with cocktails and caroling, a delicious buffet dinner, live auction, a raffle with sumptuous prizes, and much, much more reasons to celebrate. Go to the BPMM website to check out the prizes. www.bpmm.org.
There's more to come including music with the Bronx Arts Ensemble, candlelit tours of the holiday mansion and Victorian carolers---all magical ways to enjoy the holiday season. The annual Family Day: A Storybook Christmas, Saturday, Dec. 6th starts with storytelling in the morning, caroling by the Morrisania Glee Club, holiday crafts and photos with Santa ...space is limited so call Santa to make a reservation..
The spirit of Christmas never seems to end with Saturday's night's part  and the Bronx Arts Ensemble's Holiday concert on Dec. 13, 1 and 3pm and Sunday, December 24, 1 and 3 pm are free, but reservations are required at 718.601.7399.
It's a magical experience when you experience the mansion by candlelight with costume docents highlighting the 19th-century holiday traditions. Reservations are required.  Please check out costs and make your reservations for all or any of this wonderful events at 718.885.1461
Dear reader you may wish to ask just who/what is the Bartow-Pell Mansion Museum, BPMM?. It is a fabled New York City landmark; operated by the private, non-profit Bartow-Pell Conservancy located in Pelham Bay in the Bronx at 895 Shore Road. During the year the mansion and carriage house are open to the public Wed, Sat. and Sun. from noon to 4pm. For more info about Bartow-Pell visit www.bpmm.org.
Ta Ta Dear readers, fan mail welcome at pollytalknyc.gmail.com.
Visit Polly's blog a www.pollytalk.com
Posted by Polly Guerin at 7:30 AM No comments: