It's astonishing to think that an environment that incorporates nature into its environment can resonate in such a positive and creative manner that such spaces 'elevate the spirit.'  It has even been said that people feel better, dress better and tend to linger longer in such places designed by the Los Angele-based dynamic duo Stanley Felderman and his wife and partner Nancy Keatinge. The center core of their oeuvre provides installations with unique nature-centric environments. Felderman's interest in trees lends a unique dimension to his current creative expressions.
Keynote speaker, Stanley Felderman, recently presented at the Molly Barnes lunch time cultural meeting at the Roger Smith Hotel, which, by the way, is known for its patronage of  art and sculpture installations. The full house audience was populated with artists and aficionados of the art world, who sat riveted in their seats to view Felderman's image presentation and commentary.
An architect, designer and artist, Felderman  is a  pioneer of the "Total" design concept, mixing art and design for cutting-edge residential projects, tech-forward work spaces, product design for renowned brands and manufacturers, award-winning restaurants and large installations for Creative Artists Agency, Universal Pictures, Fabrege, Disney Studios and Viacom. His work has been shown at the Whitney Museum for Product Design and in 2018 won the "IIDA "CIRCLE OF EXCELLENCE AWARD. Their trendsetting oeuvre has won them recognition by MoMA, The Whitney and Newport Harbor Art Museum.
Felderman states "Our designs address the requirements of technology, communication and interaction. We want people to work anywhere, without having technology be the focal point.
We create spaces (image right) that look visually non-tech driven, but things are available when      ---push a button and monitor pops up."
Felderman is a native son, born in the Bronx
inspired by Buckminster Fuller, creating the maximum out of the minimum. "Since I was a kid I always loved art and wanted to be an artist. Then there was Italy: The New Domestic Landscape which introduced Italian Modern Design to America.
His creativity has a chameleon quality, it is never stagnant, always changing into fresh areas of expression. The latest is his love for nature, particularly trees that he feels communicate and have a life worth listening to. His prolific tree designs respond like sculpture, mosaics and fine textile designs. "I'm always reinventing, looking at things with a fresh eye." Felderman works in
Southern California and the weather has a lot to do with a positive outlook. "When there's beautiful weather almost every day there are more days to bring the outside in. "I'm a native New Yorker, so I bring an East Coast sensibility to the West Coast, It's always about strong design and color.
The team of Felderman-Keatinge stay open minded. They take potential clients on a tour of and have them talk to past clients. "We create vision boards for them to show a different way, An ideal client understands that a space is an extension of they are." Yet, this dynamic duo is still reaching for the stars and creating world-class environments that resonate with nature and tech-centric purpose. Contact: Felderman Keatinge + Associates, 5976 Washington Blvd., Culver City, CA 90232. 310.449 4727 or 310 721 7048
Ta Ta Darlings!!! Nature, Art and Architecture what a perfect environment to live and work in. Fan mail welcome at pollytalknyc@gmail.com.  Visit Polly's other Blogs at www.pollytalk.com and click on the links in the left-hand column to visionary men, women determined to succeed, poetryand fashion historian.

JOURNEY ABROAD WITH AN AMERICAN LEGEND on THE FIRST ORGANIZED TOURISM TRIP IN AMERICAN HISTORY. The quintessential American writer Samuel Langhorne Clemens (1835-1910)--known professional as Mark Twain---set the bar with high standards in his legendary travelogues. With keen observations, "He set sail from New York for a great adventure abroad whilst capturing the feelings and reactions of many Americans exploring beyond their borders and thereby inspired generations of travelers to document their voyages," stated Dr. Louise Mirrer, president and CEO of the New York Historical Society where the exhibition is on view through February 2, 2020.
The new exhibition, MARK TWAIN AND THE HOLY LAND, traces the legendary American humorist's 1867 voyage to the Mediterranean and his subsequent 1869 book--The Innocents Abroad or, The New Pilgrim's Progress---through original documents, artwork, photographs, and costumes as well as an interactive media experience. MARK TWAIN departed New York harbor on the steamship QUAKER CITY for a five-and-a-half-month excursion, the first of its kind in world travel. Known at that point for his biting satire and humorous short pieces on California and the West, Clemens had serendipitously discovered a "pleasure cruise" to Europe and the Near East,  and successfully inveigled his way onto the journey with an assignment from the San Francisco newspaper Alto California. Twain was to supply the paper with weekly columns about the trip and his fellow passengers. THE QUAKER CITY TRIP WAS THE FIRST ORGANIZED TOURISM TRIP IN AMERICAN HISTORY . The steamship was opulently outfitted with a library, printing press, piano, and pipe organ. A Quaker City passenger list, an oil painting of the ship are on display as well as a journal entry by Mark Twain.
THE INCARNATION OF THE INNOCENTS ABROAD When Twain returned to New York and then to Washington, D.C. he began reshaping those columns and other notes made during the trip into a book, The Innocents Abroad (1869), It was this work that catapulted Twain to national fame, selling more copies during his lifetime than any other book he ever wrote. Musing about the voyage in a passage later published in Innocents Abroad, Twain so aptly noted: "Travel is fatal to prejudice, bigotry, and narrow mindedness." That his travelogue espoused such a liberal sentiment is the very reason we can find Twain;s biting perspective as relevant today. THE HOLY LAND After stops in Europe travelers were greet in Beirut by a grand caravan of horses and mules for a journey of 155 miles to "Baalbec, Damascus, the sea of Tiberias, and thence southward by way of the scene of Jacob's Dream and other notable Bible localities to Jerusalem. But the pomp was in strong contrast to the reality of a small barren land, which was not the vast and monumental landscape suggested by the Bible.  image: THE HOLY LAND 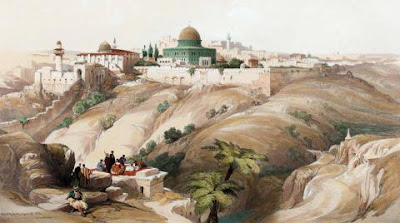 Twain was disappointed that "a fast walker could go outside the the walls of Jerusalem and walk entirely around the city in an hour." Then too, adding to the artifacts on display a manuscript leaf features Twain's withering satirical soliloquy about the Tomb of Adam at the Church of the Holy Sepulchre. "The Tomb of Adam how touching that it was here in a land of strangers, far from home, and friends, and all who cared for me, thus to discover the grave of a blood relation."  TWAIN'S CAUSTIC VIEW OF THE HOLY LAND WITH ITS NOMADS, BEGGARS AND RUINS WAS THE AUTHOR'S WAY OF PROCLAIMING THE ARRIVAL OF THE NEW AMERICAN TRAVELER, SOMEONE WHO SAW THE WORLD FOR WHAT IT WAS, WITHOUT THE DISTORTING LENSES OF TRADITION AND PERCEIVED AUTHORITY. TWAIN HAD SAMPLED THE GUIDES AND TRAVEL VOLUMES AND FOUND THEM ALLWITHOUT FOUNDATION.
TA TA DARLINGS!!! After this incredible trip to the Holy Land I'm just about ready to fly
back home.  Fan mail welcome at pollytalknyc@gmail.com. Visit Polly's other Blogs at
www.pollytalk.com and click in the left-hand column to links to visionary men, women determined to succeed, the fashion historian and poetry.
Posted by Polly Guerin at 11:27 AM 1 comment:

DESIGNS FOR DIFFERENT FUTURES at Philadelphia Museum of Art: Review By Polly Guerin

We often think of art museums as places that venerate past art treasures but the Philadelphia Museum of Art's exhibit, DESIGNS FOR DIFFERENT FUTURES, brings to light the fact that museums can and should also be places that inspire us to think about the future. This enlightening exhibition, which runs through March 8, 2020, "Offers visitors an opportunity to
understand how designers are imagining---and responding to---different visions of the future, but also an opportunity to understand just how profoundly forward-looking designs contributes in our own time to shaping the world we occupy and will bequeath as a legacy to future generations," stated Timothy Rub, Director and Chief Executive Director of the Philadelphia Museum of Art.  Image: Phoenix Exoskelton , designed around 2013 by Dr. Hom- ayoon Kazerooni for suitX (courtesy of the manufacturer) Photograph (c)suitX . Image courtesy Philadelphia Museum of Art 2019.
Thinking about the future has always been a field of inquiry by designers and architects. whose speculations on this subject---ranging from the concrete to the whimsical---can profoundly affect how we imagine what is to come. Among the many forward-looking projects in view visitors will encounter lab grown food, robotic companions and textiles made of seaweed.
The exhibition is divided into eleven thematic sections. In Bodies, designers gribble with choices about how our physical and psychological values might look, feel and function in different future scenarios. Featured here is one of the world's lightest and most advanced exoskeletons, designed to help people with mobility challenges to remain upright and active. The EARTHS section of the exhibition speculates on the challenges of extra-terrestrial communication in Lisa
Moura's alien nation installation and showcases typeface from the 2016 science-fiction film Arrival. Image: Recyclable and Rehealable Electronic skin, designed 2018 by Jianliang Xiao and Wei Zhang. (courtesy of the
designer). Image courtesy of the Philadelphia Museum of Art. Additional sections of the exhibition focus on the future of jobs and how cities will function and look 100 years from now, with robotic
baby feeders, driverless cars, and other developments offering a glimpse about how we might navigate living beyond this planet.
In a section devoted to MATERIALS on view are shoes grown from sweat and POWER looks at how design may affect our citizenship. INTIMACIES explores how technologies and online interfaces may affect love, family and community. Through Internet generated devices, designers explore the possibility digitally meditated love and sex, suggesting what advanced digital networks hold for human sexuality.                                                      Image: CIRCUMVENTIVE ORGANS 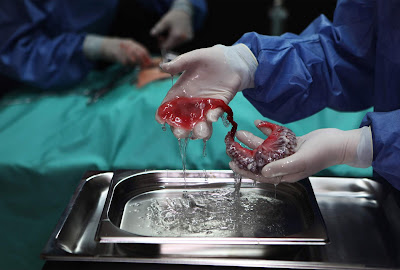 Electrostabilies Cardium (film still) designed by Agi Haines (Courtesy of the designer). Image courtesy Philadelphia Museum of Art. FUTURES THERAPY LAB: Weekly programs, many of which occur on Pay-as-You-Wish Wednesday Nights, will connect visitors with designers, artists, and locally based creatives. The Futures Therapy Lab contains a crowd-sourced Futures library that includes everything from science fiction books to the exhibition catalogue. The Futures Therapy Lab is a place for conversation, and critique and creativity in which visitors can imagine their own hopes, fears and solutions for the future through reflection, discussion, and art making.  www.philamuseum.org.
TA TA DARLINGS!!! I look forward to meeting you in the Futures Therapy Lab where we
can discuss our destiny into future. Send Fan Mail to: pollytalknyc@gmail.com. Visit Polly'a other Blogs at www.pollytalk.com and click on the links in the left-hand column.