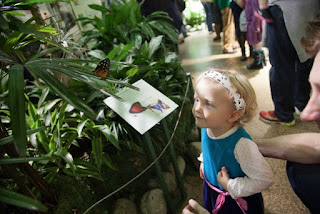 An annual favorite: The popular live exhibition, Butterfly Conservatory, is eagerly anticipated by adults and children alike at the American Museum of Natural History. The rare and wonderful exhibit weaves a magical moment to celebrate the last halcyon days of summer.  The exhibit opens to the public on Saturday, September 5 and runs through Monday, May 29, 2016.
The Butterfly Conservatory houses up to 500 iridescent butterflies that hover above visitors in a 1,200-square-foot vivarium filled with lush foliage and blooming tropical flowers where delighted children and young-at-heart adults play amid these magical winged creatures. 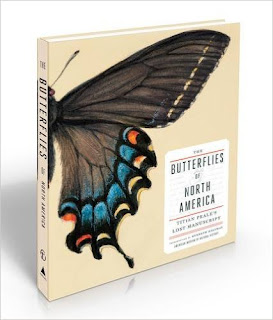 The spectacle of hundreds of live tropical butterflies is an amazing venue and is accompanied with the the never before published rare manuscript; Titian Peale's "Butterflies of North America. Peale's lost manuscript brings to light a lost masterpiece of natural history from the American Museum of Natural History's rare book collection.  It is brimming with original, vibrant color plates of numerous butterflies by celebrated American artist and naturalist Titian Ramsay Peale II (1799-1885). David Grimaldi, curator of the Butterfly Conservatory in the Division of Invertebrate Zoology shed some light on Titian's background. "He was a member of the Peale family of Philadelphia. His father, you may remember, was the painter, Charles Wilson Peale." This beautiful volume  reveals Peale's life work, equivalent in scope and beauty to John James Audubon's The Birds of America. The book includes a foreword by Museum President Ellen V. Futter and text by Professor Kenneth Haltman and Museum Curator David A. Grimaldi that describes the art and science this talented artist brought to his extraordinary work. The book by Abrams publishers is a hardcover, 256 page, 220 color illustration volume. $40.00.
Why do Butterflies matter?  Because we benefit from their pollination and they serve in the role as natural pet control. Butterflies in all their glory with wings fashioned like stained glass in vibrant colors enchant us and often mystify our comprehension. They are one of the most beautiful creatures on the plant, yet, unlike many other species, the butterfly is a delicate animal that is needed for the very health of our planet. The existence of butterfly colonies and their migration routes are threatened by habitat loss, particularly deforestation. This fact should be of great concern; a warning to us all to protest and take action to protect the butterfly. You can find a link to organizations to protect the butterfly on the Internet.
Ta Ta darlings!!! On wings of the beautify butterfly, as summer draws to a close, I wish you a very pleasant week and Labor Day weekend.  Fan mail welcome at pollytalknyc@gmail.com.
Check out Polly's Blogs on www.pollytalk.com and in the left hand column click on the direct link to the Blog that resonates with your interest.


Posted by Polly Guerin at 8:22 AM No comments: 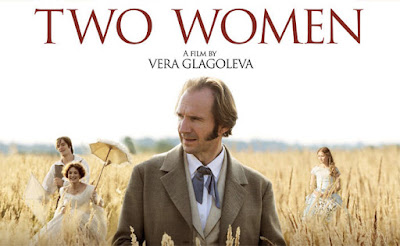 If you are an aficionado of classic films you can expect to see an intensely beautiful film, TWO WOMEN, sometime in the foreseeable future, as the release date might be sometime this fall.  This update on the film provides a preview report that ought to resonate with your interest.
The film presents a cast of mostly international Russian actors from France and Germany with Academy Award®-nominated British actor Ralph Fiennes in his first-time appearance in a Russian-language film. A consummate perfectionist, in order to speak Russian, Fiennes immersed himself in studying the Russian language and its customs.
Director Vera Glagoleva has brought to the screen a tale of love based on a classic work from Russian literature, Ivan Sergeyevich Turgenev’s “A Month in the Country.” Tugenev’s play is considered a pioneering work of literary naturalism, and Glagoleva captures the spirit of the work guiding her stellar cast to a range of rich, complex performances.
The result is a character-driven work that builds on the unfathomable emotion of love and that kind of magic that eludes most of us. The result is a character-driven work that builds to a range of rich, complex performances.

Action of the film happens within three days in the 1840s in the rich countryside estate of Russian landowner Arkadi Sergeyevich Islayev (Aleksandr Baluev) and his wife Natalya Petrovna (Anna Astrakhantseva). In this bucolic setting with middle age advancing Natalya welcomes the attentions of Mikhail Aleksandrovich Rakitin (Ralph Fiennes) as her devoted but resentful admirer, without ever letting their friendship develop into a love affair As Fiennes puts it, “I was drawn to the character of Rakitin, a sophisticated man, I believe, carrying many of the qualities of Turgenev himself. He is sensitive, and inside he carries deep emotions.”
Life seemingly goes on with peacefully terms of refinement, but suddenly it is interrupted and the quiet lives of the inhabitants of the house are dramatically changed. The arrival of the handsome 21-yer old student Aleksei Belyaev (Nikita Volkov) as tutor to her son Kolya ends Natalya’s boredom
She falls in love with Aleksei, but so does her ward Verochka (Anna Levanova), the Islayev’s 17-year-old foster daughter.  The gentle friendship between Natalia and her foster daughter Verochka unexpectedly passes into jealousy and rivalry.  To rid herself of her rival, Natalya pressures Verochka into marrying a rich old neighbor. What follows: longtime friend Rakitin discovers some changes deep inside Natalya Petrovna and can’t keep apart from it as he is secretly in love with her. Misunderstandings arise when the husband of Natalya, Arkadi begins to have his suspicions and the film unravels with an ambiguous ending.
The United States premiere screening of Vera Glagoleva's Two Women was presented by The Russian American Foundation as part of the 13th Annual Russian Heritage Month. . Contact: www.russianamericanfoundation.org for further information.
Fan mail always welcome at pollytalknyc.blogspot.com.
Posted by Polly Guerin at 7:54 AM No comments:

Bright raw colors, rough edges and spontaneity define the paintings on view by established artists including Paul Jenkins, Syd Solomon, Robert Natkin and Stanley William Hayter. These artists are seasoned poets of the brush---with a focus on pieces from the 1970s and 80s, by postwar modern artists working at the height of their careers. All of the artists represented at the Jenn Singer Gallery have enjoyed prominent exhibition histories and their works are held in the permanent collections of top institutions including MoMA, the Guggenheim, The Whitney and the Tate.
Paul Jenkins had a personal relationship with color and its purity, and was recognized as one of the leaders of the American Abstract Expressionist movement. Jenkins was known as a pioneer in uniting the concepts of color-field painting and action painting. His strong abstracts soar to heights of inspiration and resonate with hidden messages. Defined by the viewer Phenomena, for example, provides endless wonderment..Jenkins once proclaimed, "I paint what God is to me." In his paintings Jenkins flows, pulls, and pushes "pure color" to create almost celestial imagery on his paper and canvases. Two of his watercolors and oil on canvas are on view. Pictured here: Phenomena Cry of the Peacock, 1972. Watercolor on paper.
Syd Solomon's direction cast his creativity to the sea, earth and sky as inspiration for his often-explosive action paintings. Soloman gained notoriety in the 1960s, and pictured here is Baytop, oil and acrylic on canvas 1980.
It is interest to note that another artist represented here,Stanley William Hayter's roots in printmaking and Surrealism were a formative influence on Pollock and other abstract expressionists via his printmaking studio, Atelier 17, where he taught Pollock and other well know artists including Pablo Picasso, Joan Miro, Max Ernst, Alexander Calder, Marc Chagall, Jacques Lipchitz and Alberto Giacometti. In his work on canvas "Curtain," the artist plays with his love of color, abstraction and the fascination with waves.
For additional images, information contact the gallery: info@jennsingergallery.com. Summer hours: Monday-Friday: 11am-6pm. Saturday by appointment only. T. 917.722.6119. info@jennsingergallery.com.
Fan mail welcome. pollytalknyc.gmail.com.

Posted by Polly Guerin at 6:48 AM No comments: 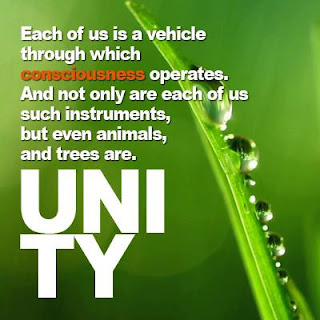 The title of the riveting film, UNITY, signifies the intention of its content---to unify our consciousness. This timely documentary will be distributed by SpectiCast in 1,000-1200 screens across the globe beginning August 12th. With persuasive images the film reminds us it's time to raise our consciousness on a broad scale of many pertinent issues in everyone's life. This is a film of stunning cinematography, a singular and unforgettable cinematic experience. Some images raw and real, filmed as events exist today grips our hearts, and in some cases, tears our emotions apart.
"The firm is not so much to entertain, like a pastime, but rather to turn something "on" inside you that has been suppressed or forgotten by the mask that society or tradition puts upon us," said Shaun Monson, the film' director. "But more than that the film also helps relate us to the mystery of existence, to all of existence, where we are merely a part. And as such it demonstrates an interesting power of the film, which not only engages but has a transforming effect on the consciousness of humankind."
Seven years in the making, the film explores the interconnectivity of all life on earth and our responsibility to do better, to learn from mistakes and to correct wrongdoing, to end senseless wars, to stop the atrocities committed against animals, to end human suffering, slavery and utter poverty, and of course, much, much more. Mr. Monson said, "Peace has to come by a shift in the way people think. We must live by loving instead of living by killing." Mr. Monson stated that great strides have been made in history and incredible leaps in technology, but we are still at each other's throats. "Peace has to come by a shift in the way people think and cultivate love and empathy, choose love over fear."
The film  is presented in chapters with quotes from famous individuals like Gandhi, Mother Teresa, Nelson Mandela, Ralph Waldo Anderson to name a few---and takes an in-depth look at what it means to be human, exploring themes of love, tragedy and, ultimately, hope. Gandhi's comment: "The rich must live more simply, so that the poor may live," resonates as the rich get richer and poor get poorer," for example resonates with us today.
There are over 100 celebrity narrators lending their voices to this powerful film, far too many to list, but including Deepak Chopra, Helen Mirren, Jennifer Aniston, Anjelica Huston, Kevin Spacey, Phil Donahue, Susan Sarandon. When Monson was asked, "Why did you use actors instead of average people?" He explained that the raw emotions that needed to be conveyed could best be done by professional actors who know how to deliver such commentary in the film."
SpectiCast has partnered with Fathom Events for the domestic release  on select U.S. screens. "We at Fathom realize the importance of sharing this impactful documentary with U.S. audiences, said John Rubey, CEO of Fathom Events. "We hope that moviegoers will walk away from the event with a new perspective about the world around them. For more information, visit the website: http://unitythemovement.com.
Fan mail welecome at pollytalknyc.gmail.com.
Posted by Polly Guerin at 5:59 AM No comments: