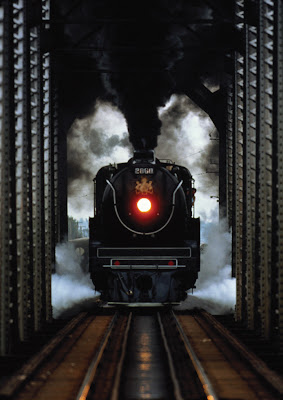 The Train Kept a Rollin'
Be part of a train wreck, join the circus, witness thriller art and brush up with genius works of art---all this and much, much more awaits you in the Big Apple and beyond. Here’s the scoop!!!

JUDGMENT DAY by Austrian-Hungarian playwright Odon von Horvath rolls roaring onto the stage as part of Bard College’s SummersScape program of theater, dance, music and film. The drama concerns a modest and punctual train conductor whose duty is distracted by a pretty passenger, resulting in a fatal crash. Is he guilty or is he not? That is the question. But driving the play is the remarkable sound affects of the train that jolts one’s safety as that all too real locomotive crashes onto the scene. An experience worth the venture in the gleaming, modern façade of the, Frank Gehry-designed Fisher Performing Arts Center in bucolic Annandale-on-Hudson till July 25th. Followed by The opera Distant Sound, by Franz Schreker and a production of Oscar Straus’ 1908 operetta, The Chocolate Soldier. For details: www.fishercenter.bard.edu/summerscape.

AMERICAN JESUS casts photographer David LaChapelle’s longtime friend Michael Jackson, shot just before his death last year, in a series of iconic Biblical scenes and another one of the photographer’s controversial pals, Naomi Campbell, makes a cameo as Botticelli’s Venus. La Chapelle said about his oeuvre, “I believe Michael in a sense is an American martyr. Martyrs are persecuted and Michael was persecuted. Michael was innocent and martyrs are innocent.” The off-the-wall artfully staged tableaux are on view at Paul Kasmin Gallery, 293 10th Ave. Through Sept. 28th. 212.563.4474 .

ROY LICHTENSTEIN’S back at the Morgan Library & Museum. His signature brightly colored paintings and his subject matter drawn from his Pop Art images is a revealing window into the development of Lichtenstein’s art, from commercial illustrations and comic strips and the famous Benday dots. The exhibition provides a rare opportunity to study the artist’s black-and-white paintings during the 1960s and underscores the two themes that came to dominate the drawings, household objects and comic book scenes of war and romance. Mark your calendar the Black-and-White Drawings opens Sept. 24. http://www.themorgan.org/.

BRING YOUR INNER CHILD to THE BIG APPLE CIRCUS where spectacular acrobats, Russian wizards of the trampoline flying overhead dazzle and delight even adult naysayers. How do those Chinese contortionists do it? Fit into cans and twist and turn with such dexterity? The juggler throws plates in the air where they float overhead and he catches them in a tumble, fiery steeds stomp their way into the arena guided by a beautiful woman while rescue dogs ply their amazing agility and all this with Bello the clown cavorting with his gravity-defying hair and signature tuxedo, white gloves and spats joins in the fun with showman panache. Through Sun. July 25th mostly 12:30 and 4:30 PM performances. At Mill River Park, Stamford, CT. http://www.bigapplecircus.org/.