Fishing For Culture in the Big Apple (c) By Polly Guerin 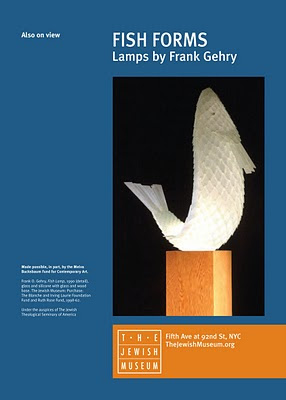 As the limpid days of summer drone on it takes a fisherman’s rod to reel in the city’s best catch at the tail end of summer. There’s plenty of cultural fish in the Big Apple pond. Here’s the scoop!!!


FISH FORMS: LAMPS BY FRANK GEHRY colorful, beautiful, playful, whimsical and glowing the sculptural artworks of the internationally renowned architect Frank Gehry explore the significance of fish imagery in Gehry’s work. The exhibition brings together eight of artists’ fish lamps with an accompanying slide show overview of how the fish form has changed from iconic symbol to transformative in Gehry’s ongoing architectural practice. The lamps are displayed in near darkness to create a gallery of glowing sculptural fish lit from within. Opens Aug. 29 through Oct. 31 at The Jewish Museum, 1109 5th Ave at 92nd St. www.thejewishmuseum.org.
WORK OF ART: ABDI FARAH
Is fishing for high praise and compliments. This exhibition of work by the winner of Work of Art, Bravo’s hour-long creative competition 10-part television series features the artist’s figurative paintings, sculpture, an drawings reflecting Farah’s investigation of the human body as a material entity that possess the potential to transcend its physical form. Ten artworks recently created in a variety of media include the centerpiece of the exhibition, a life-size sculpture of two young men sprawled on the floor, it immediacy heightened by the addition of sneakers on the feet of both men. Through Oct. 17. Brooklyn Museum, 200 Eastern Parkway. www.brooklynmusuem.org.
HOWL: The Film is a kind of dramatized drama on the beat poet, Alan Ginsberg’s poem of the same name which keeps you riveted to your seat trying to comprehend the legendary poet’s autobiographical and hallucinatory work that fueled the infamous landmark 1957 obscenity trial. You meet his friends; Jack Kerouac who introduced Ginsberg to new forms of writing and William Burroughs who helped him define his way as a gay man in the 1950, when public models were few. Most of all you’ll come away bewitched with an urge to actually read the poem. Coming to movie theaters in September. At the time of Ginsberg’s death, HOWL, had sold more than 800,000 copies and been translated into 25 languages.
ANNE MORGAN’S WAR
Rebuilding Devastated France, 1917-1924 presents rare photographs and silent film footage documenting the First World War’s devastating impact on France. The exhibition brings to life the extraordinary work taken by a small team of American women volunteers who left the United States to devote themselves to relief work with the dynamic leader, Anne Tracy Morgan, a daughter of financier Pierpont Morgan spearheading the campaign and Anne Murray Dike, a physician, taking the lead organizing activities in the field. . With haunting view of ruined French Towns, portraits of refugees it’s a ‘must see.’ The Morgan Library and Museum, 225 Madison Ave. Opens Sept 3. www.themorgan.org.
Ta Ta Darlings!!! I highly recommend HOWL, the preview was a tour de force, a unique portrait of Ginsberg, the beat poet who found new ways to express himself and in doing so, changed his own life and galvanized a generation. Fan mail always welcome: pollytalk@verizon.net. BLOGS: http://www.womendeterminedtosucceed.blogspot.com and http://www.thefashionhistorianpollyguerin.blogspot.com.
Posted by Polly Guerin at 7:40 AM