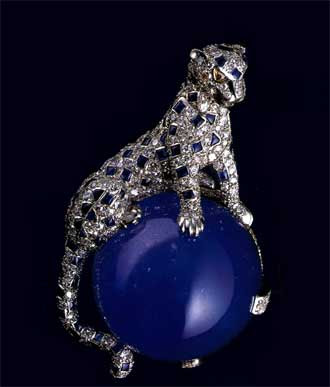 The Big Apple brings the literary lions out of their dens where they escape to museum openings to warm up their cultural appetite and titillate their sensibilities. Here’s the scoop!!!
SET IN STYLE: THE JEWELRY OF VAN CLEEF & ARPELS A girl’s best friend: All that glitters in jewelry, timepieces and other precious objects by the celebrated jewelers Van Cleef & Arpels opens in a site-specific installation by design celebrity Patrick Jouin at the Cooper-Hewitt National Design Museum. Showcasing some 300 pieces, time honored creations on view includes Princess Grace of Monaco’s engagement set and a bracelet worn by Marlene Dietrich in the 1950 Hitchcock movie, “Stage Fright.” The exhibit showcases some of the firm’s innovations such as the mystery setting in which the “Zip” necklace unzips into two bracelets. Feb. 18-through June 5th. http://www.cooperhewitt.org/.
CLOISONNE: Chinese Enamels
Breathtaking beauty on display. The Bard Graduate Center: Decorative Arts, Design, Material Culture presents Cloisonne: Chinese Enamels from the Yuan, Ming and Quin Dynasties. The exhibit examines the rare technique in China from the end of the Mongol Yuan Dynasty (1279-1368) to the end of the Qing dynasty (1644-1912). Because these objects were intended for ritual use, they have traditional Chinese forms. Indeed, the Lotus flower, a Buddhist symbol of purity, is the motifs most often encountered. Jan. 26th -April 17th. BGC Gallery, 18 W. 86th St. http://www.bgc.bard.edu/.
CEZANNE’S CARD PLAYERS
Get in the game and see how the peasants played cards. Created in the 1890s, while Paul Cezanne was living at his family estate, the Jas de Bouffan, outside of Aix-en-Provence, the artist undertook the series using peasants and laborers as models including card players engaged in the age-old ritual of their game. He also produced a large number of paintings of the individual farm workers in rarely seen preparatory oil sketches, watercolors and drawings in an innovative approach to express the essential character of his subjects. Feb. 9th-May 8th. The Metropolitan Museum of Art, 1000 Fifth Ave. www.metmuseum.org.
THE CHANGING FACE OF WILLIAM SHAKESPEARE
The debate as to Shakespeare’s likeness continues, but in 2009, when the Shakespeare Birthplace Trust in Stratford-upon-Avon unveiled a portrait with strong claims to be the only surviving contemporary likeness of William Shakespeare (1564-1616), it created an international stir. The Jacobean-era painting had hung unrecognized for centuries in an Irish country house belonging to the Archbishop Charles Cobbe (1686-1765) goes on view at the Morgan Library & Museum Feb. 4th-May 1st. 36th Street & Madison Avenue. www.morgan.org.
Ta Ta Darlings!!! I’m definitely checking out those glamour jewels at the Van Cleef & Arpels exhibit. Fan mail: pollytalk@verizon.net. Polly Blogs: go to www.polltalk.com and click on the left hand column links like, thefashionhistorianpollyguerin.blogspot.com or amazineartdecowomen.blogspot.com etc.
Posted by Polly Guerin at 9:31 AM