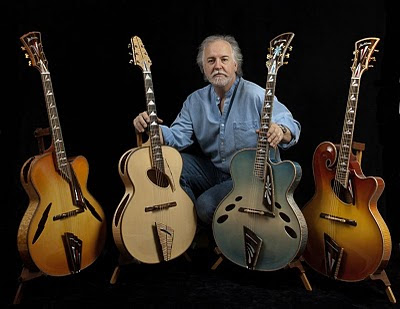 Guitars strike a musical note at museums this week strumming their stuff from legendary craftsman and artist renditions while the Balenciaga vernissage continues and a Moroccan wedding and fashion week debuts. Only in New York, could such versatility exist. Here’s the scoop!!!
GUITAR HEROES: LEGENDARY CRAFTSMEN FROM ITALY TO NEW YORK Guitar aficionados need only strum their way to the Metropolitan Museum of Art where the unprecedented exhibition of approximately 80 musical instruments focuses on the work of the modern-day New York master luthiers; John D’Angelico, James D’Aquisto, and John Monteleone. The works on view have been owned by some of the guitar greats and include masterpieces of Italian and Italian-American construction, showing the place of the modern-day masters in this long tradition. Photo of John Monteleone from the book Archtop Guitars: the Journey from Cremona to New York by Rudy Pensa, photogrpah by Vincent Ricardel. www.metmuseum.org. From Feb. 9th to July 4th. Fifth Avenue at 82nd Street. A second most interesting exhibit is Cezanne’s Card Players, created in 1890s while the artist was living with his family outside Aix-en-Provence.
PICASSO GUITARS 1912-1914
Artistic interpretation of the guitar examines a Moment of radical experimentation in 20-the century art focusing on Picasso’s two Guitar constructions which resembled no artwork ever seen before: Guitar, assembled from cardboard, paper, wire, glue and string in 1912 and a second version made of sheet metal in 1914. Picasso had packed them away together almost a century ago prompts a good reason to visit two of the most iconic works by the artist. The exhibition on view from Feb. 13th to June 6th also brings together some 65 closely related collages, drawings, paintings and photographs. At MOMA, Museum of Modern Art, 11 W. 53rd St. http://www.moma.org/.
BALENCIAGA, SPANISH MASTER
The Queen Sofia Spanish Institute’s Balenciaga exhibit features the work of the great Spanish couturier, Christobal Balenciaga, who was a master of shapely simplicity. A rare opportunity so see several couture pieces never been seen on view to the public, includes a traje de luces (bullfighting costume) and a manton de manila (rose embroidered shawl). 684 Park Ave. between 68th and 69th streets. http://www.queensofiasi.org/.
FASHION WEEK IN NEW YORK
The models are ready to command the runways on Thursday when Mercedes-Benz Fashion Week kicks off in Lincoln Center’s Damrosch Park. Word has it that Adrienne Vittadini will feature models over 35. Now that’s a switch to reality!!! According to the Style report in amNew York, Diane von Furstenberg is set to decorate the VIP star Lounge with her new home collection. “Whether it will feature wrap-dress pillows remains to be seen.”
2,000 YEARS OF JEWISH LIFE IN MOROCCO:
Celebrates the historic patrimony of Moroccan Jewry and presents the history, art and music of the Jews of Morocco in an ongoing exhibit. The American Sephardi Federation's recent 'Tableau Vivant' a theatrical and musical rendition of a traditional Moroccan Jewish Bridal celebration, 'Noche de Berberisca’ depicted the bride and her bridesmaids in full ceremonial dress in an authentic Moroccan setting, enhanced with Sephardic songs. Listen and view past events at http://www.americansephardifederation.org/. ASF, 15 W. 16th St.
Ta Ta darlings!!! I’ll be strumming my old guitar to the tune of the exhibits at the Met. Fan mail: pollytalk@verizon.net. Go http://www.pollytalk.com/ and click on the link to my Blogs in the left hand column, such as amazingartdecowomen.blogspot.com. poetryfromtheheartbypollyguerin.blogspot.com or my latest posting “Healthy Choice...Seeing What's Often Invisible,” on awakenyoursleepingbeautyedgarcayce.blogspot.com
Posted by Polly Guerin at 2:04 PM