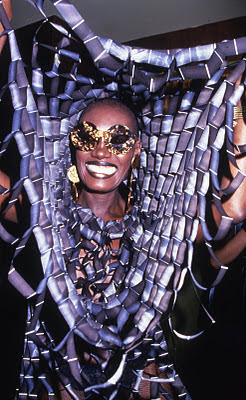 New Yorkers’ are forever in the eye of the camera! Captured in silver prints for nostalgic viewing New York’s Fashionistas appear in photographed treasures never to be forgotten, while 100 dresses get their due recognition and it's pumpkin time. Here’s the scoop!!!
INCOMPARABLE WOMEN OF STYLE: Selections from the Rose Hartman Photography Archives, 1977-2011 record the iconic moments of fashion, style, and culture for more than 30 years, capturing New York nightlife, fashion shows, parties, clubs and openings. From Studio 54 to the Mudd Club to Chelsea art galleries, Hartman’s photographs yield a treasure trove of material that portrays incomparable women of high fashion, street style, and New York City society through the eye of a social documentarian. Image: Grace Jones at her CD release party at Le Bar Bat, 1993. Rare vintage silver prints include a group of never-before-seen images of NYC’s underground style icons who drove high fashion from the city’s club scene in the late 1970s and early 1980s into the mainstream. On view at FIT’s Gladys Marcus Library, Nov. 4-Jan.20, 2012. FREE Enter at 27th St. and Seventh Av. Show valid picture ID and receive a same-day pass to the Library on the 5th floor.
TREASURE OF PHOTOGRAPHY FROM ALFRED STIEGLITZ’S PERSONAL COLLECTION at The Metropolitan Museum of Art. Stieglitz was not only a master photographer, but a powerful taste master and tireless advocate for photography as a fine art. Among the most notable portraits are Alvin Landon Coburn’s image of the Nobel laureate author George Bernard Shaw lost in thought, the glamorous portrait of the fashionable socialite Rita de Acosta Lydig and of course Stieglitz’s wife Georgia O’Keeffe. The photo exhibit complements the Museum’s show Stieglitz and His Artists: Matisse to O’Keeffe. Through February 26, 2012.
HAL RUBENSTEIN’S “100 UNFORGETTABLE DRESSES,” This HarperCollins imprint, is a joy read into iconic dresses that graced the forms of Rita Hayworth in “Gilda,” Julia Roberts in that infamous red dress in Pretty Woman, Joan Crawford in Adrian, Audrey Hepburn’s Sabrina, and political women and wedding dresses--all with a telltale story behind the wearer and the creation. The list goes on and Rubenstein, the former fashion director of Bloomingdales, includes Bob Mackie’s greatest parody dress of all time, the Starlett O’Hara curtain-rod gown for Carol Burnett. Who can forget Elizabeth Taylor’s strapless fluff of a dress which became every girl’s prom dress for the next 20 years or Ginger Rogers dancing “Cheek to Cheek” with Fred Astaire shedding feathers all the way. Picture perfect it’s a tour down fashion’s memory lane. On Amazon and major bookstores.
THE HAUNTED PUMPKIN GARDEN at The New York Botanical Garden fun for grownups trill the kid in you with spooky fun featuring pumpkin sculptures of spooky scarecrows, frightening spiders, sneaky snakes in the Adventure Garden with bubbling artisan beers and insect delicacies. The Ukaladies will be on hand performing cowboy love songs, Ruth Wallis medleys, favorites from the ‘30s and ‘40s, and a host of original hits. Friday, October 28, 7-9 p.m. At. 2900 Southern Boulevard, Bronx. www.nybg.com.
Ta Ta darlings!!! Celebrating Halloween I’m off to the Haunted Pumpkin Garden and spending the week devouring the 100 Unforgettable Dresses book. Fan mail welcome at pollytalk@verizon.net. Visit Polly’s Blogs at www.pollytalk.com and click in the right-hand column for the Blog of your interest, such as, http://www.amazingartdecowomen.blogspot.com.
Posted by Polly Guerin at 4:21 PM