Never has there been so rich a selection of cultural pursuits in New York City, and never has there been more reason to take pride in the city and its rich diversity of painter exhibits and book talks to fill your date book with calendar listings. Here’s the scoop!!! 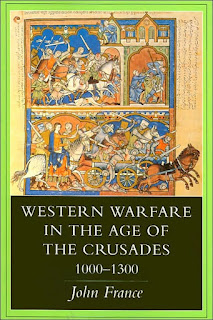 WESTERN WARFARE IN THE AGE OF THE CRUSADES(1000-1300) by John France is a FREE Friday evening talk April 27, from 7-8:45 at The Soliders Sailors Club, 283 Lexington Avenue (between 36th and 37th streets). The author manages to cover a massive breath of topis and fields that by the end you will have a pretty clear idea of how differently war was conducted in feudal societies. http://www.nymas.org/.

RENOIR, IMPRESSIONISM and Full-Length Painting: This delightful exhibit takes you on another journey into the kind of impressionism we know little about. Through nine large-scale canvases dating from the mid-1870s, Renoir uses a format of nearly life-size works that showcase the artist’s virtuosity at rendering figures but also gives us a sneak preview into the sumptuous fashions of Belle Époque Paris. Pleasures meet the eye viewing the Frick’s “La Promenade” of a mother out in the park with her two young daughters or “The Umbrellas” (Les Parapluies), and “The Dancer,” a portrait of a young ballerina longingly looks out at us with youthful yearning. There’s much more to meet the eye at The Frick Collection, through May 13th. http://www.frick.org/.

EDOUARD VUILLARD, A Painter and His Muses: Ordinary friends and patrons portrayed in Vuillard’s paintings shows us the many ways in which the master drew inspiration from these people and lovingly portrayed them in some 50 works in assorted media. The show spans Vuillard’s career, covering his artistic beginnings as a member of the avant-garde Nabi movement and the domestic interior scenes for which he is best known, his graphic art for the periodical La Revue blanche, his decorative commissions and his lesser-known later portraits. At The Jewish Museum, 5th Ave. at 92nd St., May 4- Sept. 23. http://www.thejewishmuseum.org/.
REMBRANDT AND DEGAS, Portrait of the Artist as a Young Man: While it has been tradition for artists to copy Old Masters to perfect their craft, it is obviously dominant in the exploration, an insider’s view, of the 17th century Dutch master’s influence on Degas, his 19th-century French admirer. The exhibit illustrates how the artist spent much time during his formative years copying Old Masters both at the Louvre and in Italy and despite his later association with impressionism; he remained devoted to those early exemplars throughout his life. The show unites some 20 of their earlier self-portraits both painted and graphic in a stunning review at The Metropolitan Museum of Art, 1000 Fifth Avenue through May 20th. http://www.metmusuem.org/.
CINEMA TUESDAYS at the French Institute Alliance Francaise, FIAF, continues its Cinema Tuesdays series in May and June dedicated to the films of Romy Schneider in commemoration of the actress’s death. At Florence Gould Hall and Tinker Auditorium, http://www.fiaf.com/.  At The Museum of the Moving Image in Astoria, Queens, the Fashion and Film Festival, “If Looks Could Kill, runs May 4-13 with headliner Marlene Dietrich in the 1936 “Desire.” The films give us a bird’s eye connection between fashion, film and extravagance. http://www.museumofmovingimage.org/. .
Ta Ta darlings, I always love going to the Frick, its serene ambiance is the perfect setting for Vuillard’s vernissage. Fan mail welcome: pollytalk@verizon.net. To view Polly’s four Blogs go to www.pollytalk.com and in the left-hand column click on the link to quickly access, for example, amazingartdecowomen (women determined to succeed).