CHILL OUT WITH A MUSEUM RESPITE (c) By Polly Guerin

CHILL OUT WITH A MUSEUM RESPITE ©

When the heat gets hotter take a respite in a museum where exhibitions both entertaining and educational cool off the senses and stimulate your brain. Only in New York my friends, the best of New York. Here’s the Scoop!!! 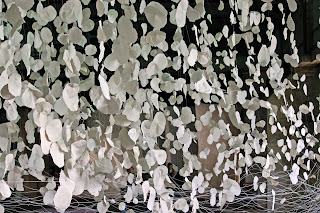 MONIKA GRZYMALA Take a breather and float in the magical world of Berlin –based artist Monika Grzymala 's Volumen, a breathtaking large-scale sculptural installation at the Morgan Library & Museum with public viewing starting July 19th through November 3, 2013. Volumen is composed of sheets of handmade paper, some of them printed with images of autograph manuscripts from the Morgan’s literary collections, connected with bookbinding yarn and suspended from the ceiling of the museum’s soaring glass-enclosed Gilbert Court. Location: 225 Madison Avenue at 36th Street. Themorgan.org

LE CORBUSIER: An Atlas of modern landscapes reveals the role of locations both real and imagined in the vast varied oeuvre of the pioneering Swiss-born French architect. Holding that functional building and urban planning could improve people’s lives; he famously defines a house as a 'machine a habiter' in his seminal 1923 book, "Vers une achitecture.” Not to be passed over lightly the extensive show includes samples of his works as an architect, interior designer, artist, city planner, writer and photographer, ranging from early watercolors of Italy, Greece and Turkey to models of large scale projects. At the MoMA, the Museum of Modern Art at 11 W. 53rd Street.

THE CYRUS CYLINDER and ANCIENT PERSIA digs deep into ancient history. The Cyrus Cylinder, a 2,600-year-old inscribed clay document, is one of the most famous surviving icons from the ancient world. Excavated in Babylon in 1879, the Cylinder was inscribed in Babylonian cuneiform on the orders of the Persian King Cyrus the Great, after he captured Babylon in 539 B.C. A unique aspect of the exhibition at the Metropolitan Museum of art will be its display within the Galleries of Ancient Near Eastern Art, where objects from the permanent collections—including the famous lions from Babylon—provide a stunning backdrop. Engraved cylinder and stamp seals played an important role in the ancient Near East. The impressions they made on clay documents served as permanent visual reminders of the sealer’s participation in the performance of personal, legal, or administrative act. 1000 Fifth Avenue, metmuseum.org

MUNCH/WARHOL and the MULTIPLE IMAGE brings together two of the 20th Century’s most prolific and inventive printmakers. Norwegian Edvard Munch and American Andy Warhol. The exhibit, organized in honor of the 150th anniversary of Munch’s birth, examines four graphic images produced by Munch at the turn of the century, The Scream, Madonna, The Brooch, Eva Mudocci, Self-Portrait and later revisited by Andy Warhol in a little-known by extraordinary series of prints from 1984. At SCAN, Scandinavia House, Docent-led tours Saturday, July 27, 1pm free with price of exhibition admission. At 59 Park Avenue at 38th Street