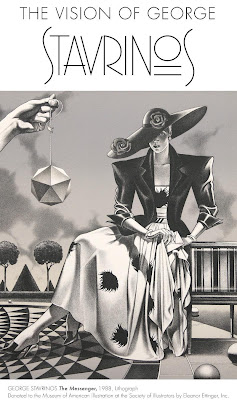 A seductive draftsman and fashion illustrator, the renaissance artist George Stavrinos was a gifted designer, photographer, filmmaker and commercial illustrator who gets stellar recognition in the exhibition, THE VISION OF GEORGE STAVRINOS at the Museum of American Illustration/the Society of Illustrators at 128 E. 63rd St. in New York City through October 19, 2013, which features over 100 illustrations highlighting Stavrinos’ career. His works are punctuated by supreme beings, women and men so chic and elegant that they graced the pages of elite magazines and the fashion advertisements of the most prestigious department store advertisements in the city.


A TALENTED STUDENT Like a phoenix rising from the sea Stavrinos emerged as an unprecedented talent in a family that approved his career choice. He studied graphics at the Rhode Island School of Design, moving later in 1973 to New York City where he presented his portfolio to eh prestigious Push Pin Studios where co-founders Seymour Chwast and Milton Glaser recognized his talent and offered him a staff position. Though Stavrinos chose only to be represented by Push Pin, his oeuvre was prolific. He expanded his client list to include the New York Magazine, Bonwit Teller, Psychology Today, Pan Am, Columbia Records, Capezio, Viva, Oui and Gentlemen’s Quarterly to name a few.

A BRILLIANT CAREER George’s career, kicked off in the fast trace and in 1977, when he began producing fashion illustrations for Barney’s and in conjunction with an ad agency, his work quickly became the face of Barney’s, new, chic, upscale look. It was at this time that George contributed work to the Gay Source: A Catalog for Men. Stavrinos was at the height of his métier, a sort after artist and weaver of magical images that live in his illustrations. He also taught at the Fashion Institute of Technology in New York and was invited to lecture at Tokyo's Designers Gakium College and the Art Center College of Design in Pasadena. In 1979, Stavrinos began an association with the retailer Bergdorf Goodman that would launch him into the fashion world's stratosphere.

PARTNERSHIP WITH LGBT Stavrinos’ life was cut all too short in 1990 at the age of 42 from pneumonia related causes and by the AIDs epidemic that swept through an entire generation. Yet, his work steadfastly remains an inspiration for art and fashion today so it is fitting that in partnership with Live Out Loud a non-profit organization dedicated to inspiring and empowering LGBT (Lesbian, Gay, Bisexual, Transgender) youth that a portion of the proceeds generated during the exhibition will be donated to the Live Out Loud scholarship program awarded to college-bound LGBT high school seniors based on leadership, community service, academic credentials, financial need and future goals. Visit: www.liveoutloud.info

The Society of Illustrators, founded in1901, is the oldest non-profit organization solely dedicated to the art and appreciation of illustration in America. Prominent Society members have been Maxfield Parrish, N.C. Wyeth and Norman Rockwell, among others. It is open to the public free of charge on Tuesday, 10-8pm; Wednesday-Friday, 10-5pm; and Saturday, 12-4pm. www.societyillustrators.org.