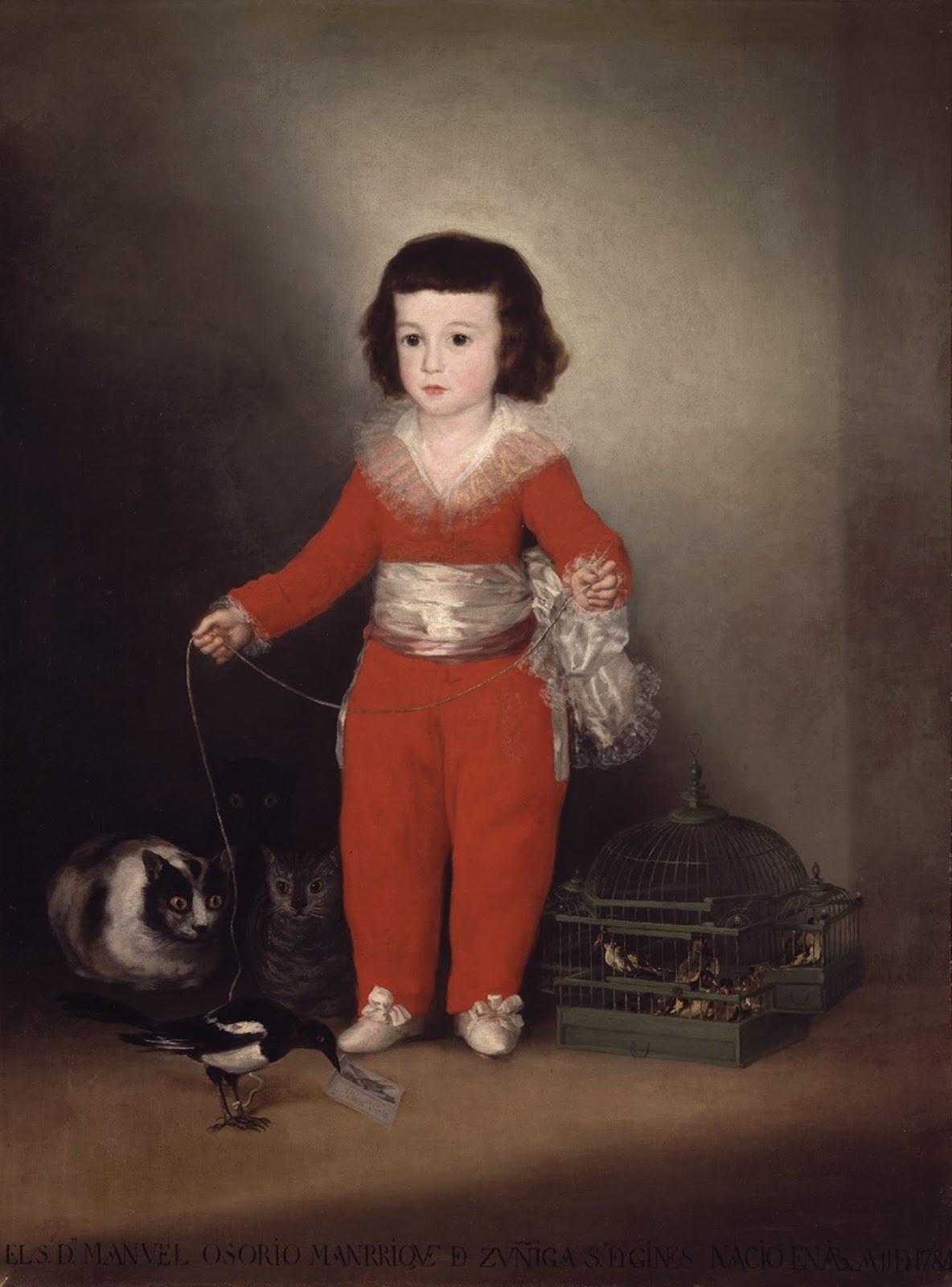 The ever engaging cultural life in New York City never disappoints with museum openings, honorary exhibitions and artist venues to perk up our calendar this week. Only in New York my friends, the Best of New York. Here’s the scoop!!!

GOYA and the ALTAMIRA FAMILY You’ve seen him once and you can see him again!!! This adorable little boy, known as the “Red Boy,” Francisco de Goya’s portrait of the beguiling 5-year-old Manuel Osorio Manrique de Zuniga now in residence at the Metropolitan Museum of Art opens tomorrow, Tuesday April 22 and stays on display through August 3, 2014--painted between 1786 and 1788 when Goya was beginning to experiment with aristocratic portraiture. The tiny tot (pictured here) who sadly died in infancy is dressed from head to toe in red with his pet magpie, assorted goldfinches in a cage and three cats. His apparel and manner reflects a privileged lifestyle but Goya was deeply touched by the child and captures the quality of innocence. He was the son of Count Altamira, governor of the Banco de San Carlos (now the Banco de Espana) who commissioned the portrait along with three others: a beautiful portrait of Manuel’s mother and sister; Countess de Altamira and her Daughter, Maria Augusta and a portrait of Manuel Osorio’s brother Vicente Joaquin de Toledo. A fifth portrait depicting Count Altamira’s middle son, Juan Maria Osorio, who also died in childhood, was painted around the same time by Augustin Esteve, one of Goya’s pupils. Worth the trip to the MET, no need to go to Spain to see all four portraits reunited. www.metmuseum.org

FACADES "Feting New York’s BILL CUNNINGHAM," is a ‘must see’ exhibition at the New York Historical Society. Although the celebrated phtogrpaher is celebrating his 85th birthday Cunningham is still running stronger than ever on his bicycle or on foot catching the fashionistas and curiosities on the streets of New York. A tour of the photos in the exhibition, from the Sixties and Seventies of his muse Editta Sherman, posed in high fashion in front of New York City’s famous facades chronicles the architectural riches of the city. About the costumes Ms. Sherman wears Cunningham recently remarked to Women's Wear Daily, “Most everything was collected from street fairs and thrift shops. Back in the Sixties no one wanted the old clothes. Balenciaga would be $3 in a thrift shop and Courreges, I think, was $2.” A book accompanying the exhibit is on sale and public tours and lectures are scheduled. A special screening of the of the Bill Cunningham film was shown last week. Info contact: www.nyhsmuseum.org/212.485.9275.

ERTE—The Life and Art of Erte the famous artist and illustrator is the first time the Ziegfeld Society is feature a designer from the world of Florenz Ziegfeld, so you won’t want to miss it this Saturday, April 26 at the Lang Hall at Hunter College 69th street, 3:30 to 5:30 pm. (doors open at 3:00 pm). The show features performers from Broadway, New York, California and Pennsylvania. Joining Stephan Artist-in-Residence, California Art Deco Society will be Merrill Grant (the Ziegfeld Society’s Sweetheart, the First Marilyn Miller, Vagabond lover, the Real Mama Rose), Walter Willison (Two By Two-B’way, Grand Hotel B’way, Pippin-Bway and the Dolly Sisters to name a few. Stephan will take you through the life of Erte and you will hear songs from the various famous revues that Erte designed such as The Ziegfeld Follies 1923, George White Scandals, The Hollywood Review of 1929. Admission: $20 for non-members, members $14. Tickets on line at the ziegfeldsociety.com

BULLETS OVER BROADWAY “THE MUSICAL”---is based on the screenplay by Woody Allen and Doulglas McGrath of the 1993 film Bullets Over Broadway, which made cinematic history for the General Society of Mechanics and Tradesmen of the City of New York at 20 W. 44 Street, where a scene for the movie was shot. The Musical version at the St. James Theatre is a riveting, high-roller, gangster characters, show gals is a non-stop romp with music high jinks and familiar songs such as “Up a Lazy River,” “I’m Sitting on Top of the World” and “There’ll be Some Changes Made.” One scene after the other pumps up the energy with choreography---tap dancing gangsters---and chorus girls seemingly scantily dressed to show off their acrobatic talents. There are some shoot-outs but all in good humor with scene décor favoring an Art Deco sensibility. The scenic designer deserves recognition—a gangster car seemingly glides though the skyscrapers in the canyons of New York Worth the price, worth the nearly three and half hours that flies by with the lighting speed of a bullet. It is a must see, best musical of the year!!!

Ta Ta Darlings!!! Pollytalk went to see Bullets Over Broadway and has been dancing in her seat ever since. Go and enjoy this once-in-a-lifetime entertainment. Fan mail welcome at pollytalk@verizon. Visit Polly’s website pollytalk and in the left hand column click on my other Blogs on fashion, visionary men and hidden treasures in New York.