LOVE in the WARS, A ROMANTIC DRAMA at BARD (c) By Polly Guerin 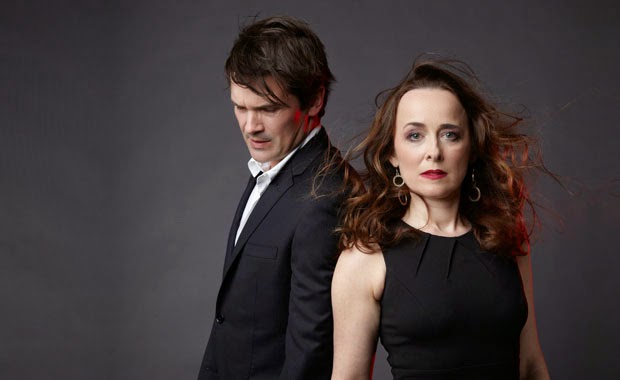 Penthesilea...World Premiere at Bard College, Annandale- on-Hudson, N.Y.--- Summerscape July 16 through July 20: Fisher Center, Theater Two.
The world premiere of a new version of Heinrich von Kleist's, " Penthesilea" by the  Irish novelist, John Banville resonants in modernity with overtones of love, hate and war. This production keeps you riveted to your seat as high drama unfolds an ancient story, drawn loosely from Homer. This new production is great in many ways, one of the most striking of which is the depth of psychological insight it presents on the subject of the unending war between the sexes.
It recounts the meeting between its eponymous heroine, The Queen of the Amazons, Penthesilea and the Greek Hero Achilles. The action goes full blown with the ferocity of her passion which collides with Achilles' stubborn will, setting in motion  a tragicomedy of love and misunderstanding. Sounds familiar? The fact that the actors are in modern attire also helps to convey the up-to-date message that conflict between the sexes is an ongoing battle.
At the post performance talk, I mentioned to the two-time Obie Award winner, director, Ken Rus Schmoll, "It reminds me of the battle between the sexes in the corporate world, the Amazons representing the women who break through the class ceiling and the men they beat as they scale the executive ranks, yet it just takes one modern day Achilles and love in the end conquers all."  Director Ken Rus Schmoll responded: "You're on the right track, but  for each person the play has different interpretations."
Incidentally, Mr. Schmoll is a master of nuances of genre and language, and an ideal interpreter of Banville and Kleist's theatrical game playing. The stark white background in half shadow also creates a mystical boundary to the action in the play.
However, Love in the Wars is an adaptation of Penthesilea and in this production the great romantic playwright has met an an ideal present-day interpreter in John Banville who brings the play up to speed with Actor's Equity Association actors including Birgit Huppuch as Queen of the Amazons and Chris Stack as Achilles. These two combatant's high energy driven performance keeps the presentation in high gear during the production's two hour performance (no intermission). The supporting cast of performers are no less remarkable, as they, too, bring the play forward in modern dress with dramatic flair the telling of  the ancestral story.
To recap: At the height of the Trojan War, the armies of Greece and Troy are locked in a seemingly endless stalemate. Suddenly the Amazons, a fearsome nation of all-female warriors led by Queen Penthesilea, arrive at Troy. By seductive and violent force, the Amazons take many Greeks captive, including the mighty general Achilles. These women have for generations sworn to live without men, but once a year they capture the strongest and best-bred males they can find, using them to procreate in order to further their kind. With the Amazons now involved in the mythic battle at Troy, things seem to be going badly for the Greeks---until Penthesilea and Achilles begin to fall in love.
Bard Sunmerscape is a seven-week Arts Festival also exploring the life and times of Franz Schubert and the first U.S. revival in 100 years of Weber's Opera Euryanthe and the return of the Trisha Brown Dance Company.A courtesy bus ($20 round trip) is available for some performances. Box office:
845.758.7900 or contact:  fishercenter@bard.edu/summerscape/2014 preview.
Ta Ta Darlings: Love in the Wars is a riveting experience. Trust me, I saw a performance this past Sunday and it lives up to its ancestral message with a vibrant modern twist.  Fan mail welcome: pollytalk@verizon.net. Visit Polly's Blogs at www.pollytalk.com on amazing women, visionary men, hidden treasures and poetry.