REVOLUTION OF THE EYE, at The Jewish Museum: Review by Polly Guerin 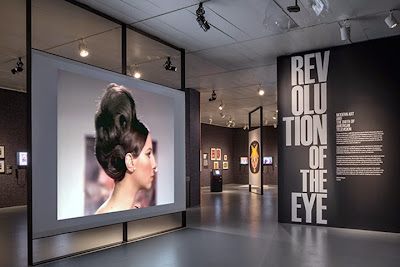 Babs in full blown drama is the first screen you encounter as you enter the Jewish Museum's exhibit "Revolution of the Eye, Modern Art and the Birth of American Television." The exhibit, running through to September 20,  is a stunning tribute to the golden years of American television. It's nostalgic trip back in time when television was innovative, adventuresome and tied into the world of art and its celebrated artists.. Here we see the 23-year old Barbra Streisand dashing about in a  colorful Op-Art dress, singing, "Gotta find someplace...some place where I can just be me,"
In this excerpt form Ms. Streisand's 1966 CBS showcase "Color Me Barbra," the young starlet dashes about in the Philadelphia Museum of Art, and the modernist paintings on the walls are more than just backdrop. We see  her interaction with the art while entering portraits, for instance,  by Modigliani and Eakins, while she sings as the women they painted. It's really charming and entertaining and the high spirited Babs delivers an interesting performance that melds art into television with equal panache.
It was the years from the 1950 to the 1970s when television was a neophyte and network television seeking ways to communicate intermingled with art the of its time. Clips, advertising, periodicals, merchandise reveal the influence of artists from Marcel  Duchamp and Salvatore Dali to Ben Shahn, Saul Bass, Roy Lichtenstein and Andy Warhol. 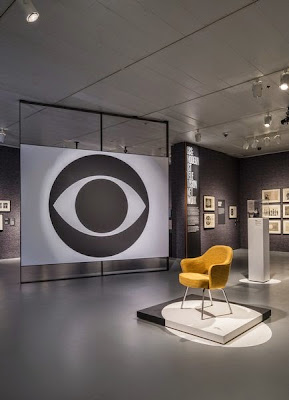 The show takes you on a journey through the years of The Twilight Zone with the surrealism influences of Dali and Magritte that Rod Serling, the shows creator, dutifully acknowledged.This was television for intelligent viewing with a large screen featuring a Chagall-like field of stars on The Twilight Zone, another had a Duchamp spiral. Television then was educational and it was entertaining, and it introduced viewers to innovative and inventive programming. For instance, the influence of modern art and design, such as the famous eye logo, the corporate identity of CBS, is presented in all it incarnations.
Later sections of the exhibit focus on the influence of Op and Pop art with references to "Rowan & Martin's Laugh In," and "The Ed Sullivan Show."
Don;t miss this opportunity to take a turn down memory lane when the world of high art onscreen had its finest hour, but died out in the 1970s. Viewers of the exhibition may come away from the.show thinking: "I wish they had shows like that now." At the Jewish Museum, 1109 Fifth Avenue, at 92nd Street.
Ta Ta darlings, Babs never disappoints!.  Fan mail welcome at pollytalknyc@gmail.com.  Log into Polly's Blogs on fashion, beauty, remarkablemen, womendetermined to succeed at www.pollytalk.com and in the left hand column click on the link to the Blog that may resonate with your interest.