If mirrors could talk what would they say to Frida Kahlo?  The rare and vintage photographs of the Mexican Artist, by twenty of the most legendary photographers of the 20th century, reveal the personal and poignant side of Frida's complex intimate life, in a record-breaking exhibition 'MIRROR MIRROR...Frida Kahlo's Photographs" at Throckmorton Fine Art. through September 12, 2015. At 145 East 57th Street (Third floor).
Perhaps Frida's fascinating with mirrors can best be explained by Dr. Salomon Grimberg, M.D., one of the leading experts on the life and work of Frida Kahlo.  In his recent talk entitled, "Frida saw herself in photographs before discovering mirrors,"  he explained that Frida's father was a photographer, and as a girl, she saw her looks in his photographs before she discovered mirrors, which became inseparable companions that provided her with a sense of self. The image left is a photograph by Lola Alvarez Bravo, who claimed that Kahlo was sought after by photographers because of her aesthetic allure.
"Frida and her exotic beauty are part of the universal conscious and everyone was part of that." There are many other photographers referenced in the show including Hector Garcia, Antonio Kahlo, Berenice Kolka and Nickolas Murray, among others. Five works by the great German-born photographer, Giselle Freund  were taken during a two year period beginning in 1950 when Freund was immersed in Mexican culture and spent a great deal of time at Kahlo and Diego Rivera's home. Her powerful images are a testament to Kahlo's strength and endurance during incredibly trying times.
No doubt, the mirror image of herself was what Frida needed to confirm her relevancy in world that mainly existed at La Casa Azul, her home in Mexico. . Spencer Trockmorton said, "Frida Kahlo's life and art has inspired the world for decades. In many ways she was a champion at overcoming a life of personal tragedy and disappointment. Many of her paintings are self-portraits which enable us to see just how she used her talents to portray her experiences handling challenges that might have consumed those with less determination..Her ability to rise above so many obstacles has left an indelible mark, and is perhaps her greatest achievement."

Frida was often in pain, largely as a result of a tragic 1926 accident in which a bus she was riding in collided with a train, leaving teenage Kahlo with a crushed spine and right leg, among other injuries.As a result, Kahlo endured countless surgeries during her life, yet Frida's career as a painter was borne as a result of those injuries. When she was confined to bed she began to paint.
Her German-born father and Mexican mother had raised her at  La Casa Azul and her studio and gardens there were where she sought refuge and inspiration throughout her life, which ended before her 47th birthday.
As much, if not more than any movie star in Mexico, Kahlo was photographed and her photos nurtured the limelight around her. Today, those same photographs, which drew the public with her magic, continue seducing others. It is time to visit the Trockmorton Fin Art gallery to garner a rare glimpse into the life a remarkable woman who was determined to succeed beyond the confinement of her incapacitating circumstances.. So often, her paintings reflect the torment of her pain but they also introduce us to suffering that inspired her fascinating body of work. 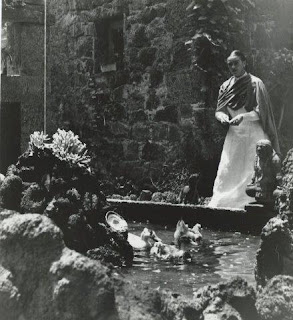 Ta Ta Darlings!!! I found Dr. Grimberg;s talk so very interesting and insightful. Don't miss this rare opportunity to get to know Frida better. Fan mail welcome at pollytalknyc@gmail.com. Visit Polly's Blogs at www.pollytalk.com and in the left-hand column click on the link to the Blog that meets your interest.
The image left: Frida in Garden, Casa Azul is by Gisele Freund. The Throckmorton show has been staged to coincide with a comprehensive series of events at the new York Botanical Garden, that includes a show of Frida Kahlo's paintings and works on paper and highlights Kahlo's intense interest in the natural world of botanicals. "Frida Kahlo: Art, Garden, Life at NYBG also features a dramatically 'reimangined' version of Frida Kahlo's garden and studio at La Casa Azul at the Enid A Haupt Conservatory.