Here's  heads up on one of fashion's most coveted event: 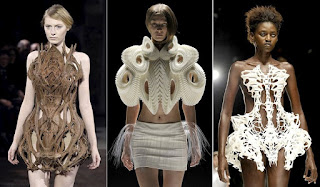 The never ending love affair with fashion will take on a new spin at the upcoming Metropolitan Museum of Arts' spring 2016 exhibition, manus x machine: fashion in the age of technology, on view May 5 through April 14, 2016 (preceded on May 2 by the Costume Institute Benefit. May 2.  However, if you want to attend the highly coveted Met Ball you not only would have to be on Anna Wintour's highly coveted list, but you would have to be among the 600 luminaries---one of the social cognoscenti, a brilliant star on the firmament, or  a show-stopper celebrity. Image Left: Iris van Herpen's 3D fashions.

Presented in the Museum's Robert Lehman Wing and the Anna Wintour Costume  Center, the exhibition will explore the impact of new technology on fashion and how designers are reconciling the handmade and the machine-made in the creation of haute couture and advant- garde ready-to-wear. 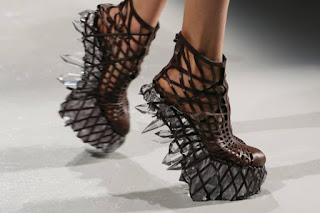 SO WHY IS TECHNOLOGY SO IMPORTANT? Mais, pourquois pas? "Traditionally, the distinction between the haute couture and pret-a-porter (ready-to-wear) was based on handmade, one-of-a-kind fashions and the machine made, but recently this distinction has become increasingly blurred as both disciplines have embraced the practises and techniques of the other," said Andrew Bolton, Curator in The Costume Institute. "manus x machina will challenge the conventions of the hand/machine dichotomy, and propose a new paradigm germane in our age of digital technology."  Image right: 3D Digital Shoes.
EXHIBITION OVERVIEW: manus x machina will feature more than 100 examples of haute couture and avant-garde ready-to-wear, dating from a 1880's Charles Frederick Worth (father of the Paris Haute Couture) to a 2015 Chanel suit.  Sentimentally the exhibit will reflect on the founding of the Haute Couture in the 19th century, when the sewing machine was invented, and the emergence of a distinction between the hand (manus) and the machine (machina) at the onset of industrialization and mass production. It will explore the ongoing rhetoric of this dichotomy which hand and machine are presented as discordant instruments in the creative process, and will question this oppositional relationship as well as the significance of the time-honored distinction between the haute couture and ready-to-wear
WORKS IN PROGRESS 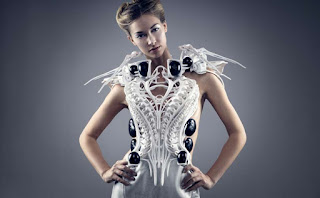 Fascinating juxtaposition of the pairing of handmade haute couture garments and their machine-made ready-to-wear counterparts gives cause to pause and reflect on the great fashion industry's ability to capture our collective imagination.  Most delightful, there is a suite of rooms reflecting the traditional structure of a Parisian haute couture atelier and is constituent petites mains workshops for embroidery, feathers, pleating, knitting, lacework, leatherwork, passementerie and fringe work. Image Left: 3D Advant-Garde Garment.
They will be contrasted with ensembles incorporating 3D printing, laser cutting, thermo shaping, computer modeling, circular knitting, ultrasonic welding, and bonding and laminating. There's a great deal to take in but the series of "in process" workshops, including 3D-printing workshops where visitors will witness the creation of 3D-printed garments during the course of the exhibition.
Ta Ta Darlings!!  The member preview is May 3 -4. The exhibition opens to the general public on May 5, so buy your tickets early.  For those fashion enthusiasts, a special feature the Museum's website: www.metmuseum.org/manusxmachina, provides further information about the exhibition.  Fan mail welcome at pollytalknyc@gmail.com. Visit Polly's Blogs on www.pollytalk.com and select the Blog that resonates with your interest...just click in the left hand column for the direct links to poetry, visionary men, womendeterminedtosucceed, etc.
Posted by Polly Guerin at 12:25 PM