MUSEUM of the AMERICAN REVOLUTION, Philadelphia; Review By Polly Guerin 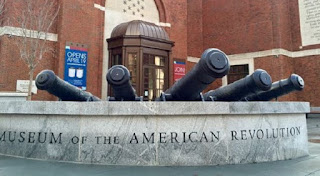 Oh, to be in Philadelphia on Wednesday, April 19th!!! It marks the 242nd anniversary of the "shot heard 'round the world" that ignited the American Revolutionary War in 1775 and quite appropriately it also marks the newest portal to Philadelphia's great historic landmarks, the MUSEUM of he AMERICAN REVOLUTION'S grand opening in the heart of historic Philadelphia this Wednesday. It is a logical location making Philadelphia the most exciting destination for those interested in exploring the birth of our nation. 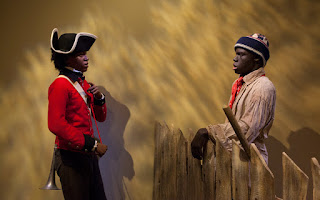 The museum tells the story of the founding of America in authentic and vivid interactive exhibitions. "We are very proud to tell that story in both its contradictions and its inspirations. At that time nothing seemed more improbable---first that roughly two million colonists spread across thirteen states could stand up to the full military might of the British empire," said Michael Quinn, president and CEO. "And, secondly that a society with slavery at its foundation and dispossession of Native Americans at its heart could articulate such powerful ideals as equality, dignity and freedom as its core."
One of the premier collections of its kind, the Museum includes several thousand objects that span the Revolutionary era, from an elaborately decorated mug wishing "Liberty Forever" to the town of Boston, to a religious book owned by Martha Washington, and from a British military musket used during the opening battles of the Revolutionary War to the first newspaper printing of the Declaration of Independence. 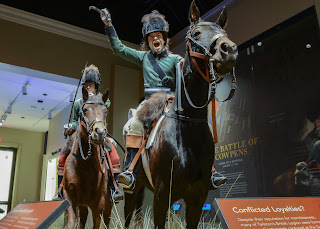 Then, too, there more than 20 life-like figures that appear individually or in historical vignettes, or tableaux, that re-create particular moments during the American Revolution. These include the statue of King George III as it is about to be torn down by a mob of angry New Yorkers, a pair of Loyalist cavalry troopers in the South (pictured left) and a conversation between enslaved Virginian and a black Loyalist soldier in 1781 (Above Right: picture MOAR jpg.) It is interesting to note that many enslaved African Americans joined the Loyalists because they were promised their freedom.
While major skirmishes and battles of the War have their historic prominence, consideration is given to the Oneida Indians. There are lifelike figures of men and women wearing authentic 18th century apparel featured in a multimedia gallery dedicated to the Oneida Indian nation who supported the American Revolution. Sadly of note,  American leaders had promised that they would not forget their contributions, but after the war the tribe was pushed off its land and the Oneida scattered West to Wisconsin.
The Museum is quite a treasure trove, recording as it does with such deep research and authenticity  Location 101 South Third Street (Corner of Third and Chestnut Streets).  All tickets are valid for two consecutive days and that is a good thing because you would need ta second visit; there is a wealth of information and a breathtaking number of visual enactments.
For ticket info: 267. 858.3308. www.AmRevMuseum.org. A restaurant and gift shop on the premises.
Ta Ta Darlings!!! Stop first and see the introductory film on the first floor and throughout the exhibitions there are mini theater filmings.  Did I mention WASHINGTON'S HEADQUARTERS TENT? A must see, it is one of the most iconic surviving artifacts of the Revolution. Fan mail welcome at pollytalknyc@gmail.com. Visit Polly's other Blogs at www.pollytalk.com.