Paris, France, the unprecedented melting pot of the avant garde artists, welcomed the handsome Italian Sephardic Jew, Amedeo Clemente Modigliani (1884-1920), who would become renowned as a celebrated artist and sculptor. With a penchant for elongated figures and prominent noses he asserted his Jewish sensibilities and pictorial ideas through drawing and sculpture.  Image: Left to Right: LIMESTONE HEAD by Amedeo Modigliani's 1911-13.Image provided by Solomon R. Guggenheim Foundation/Art Resource, New York. KNEELING CARYATID, 1911-12, Black crayon on paper. Paul Alexandre Family, courtesy of Richard Nathanson, London. JEANNE HEBUTERNE with Yellow Sweater, 1918-19, Solomon R. Guggenheim Museum. Jeanne Hebuterne met the artist through her brother, Andre Hebuterne who had come to Paris to become an artist. Shortly after Jeanne was introduced to Modigliani she moved in with him against her family's wishes. Their union was recognized as a common law marriage and they had one child, Jeanne Modigliani. Life with Modigliani must have been had. He became an alcoholic and drug  addict probably due to mask his tuberculosis from his acquaintances. In France in the 1900s there was no cure and it was a horrible disease and those afflicted with it were ostracized. After Amedeo's death in 1920, the next day in despair Jeanne Hebuterne threw herself out of the family's 5th floor apartment building and died on impact. It is interesting to note that, in her short lifetime, Jeanne had become quite an accomplished artist and achieved recognition in art circles worldwide, along with her famous partner. 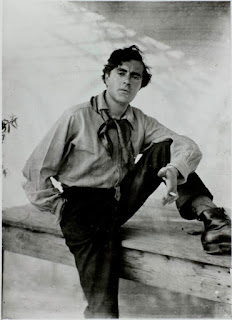 When Modigliani arrived in Paris in 1906, the city was still rolling with anti-Semitism after the long-running tumult of the Dreyfus Affair, an 1895 scandal in which a French Jewish army officer had been falsely accused of treason, resulting in a surge of nationalism and he influx of foreign emigres, who re-settled within the nation's borders. In Paris, he chose to settle in Le Bateau Lavoie, a commune for penniless artists in Montmartre. With his cosmopolitanism and his fluent French he could easily have passed as gentile. He chose instead to use his work to question the very notion of identity.  As a result his oeuvre was exclusively figurative, in itself an eccentric choice with the experimental artistic milieu of Paris at the time.
This was a period of remarkable self-assertion for the artist, an Italian Sephardic Jew, within the community of predominantly Jewish immigrant artists to which he belonged, including Marc Chagall, Chaim Soutine and Jules Pascin. There in Paris, he also came in contact with other prominent artists including Pablo Picasso and Constantin Brancusi, and others.
When Modigliani moved to Paris, he came up against the idea of racial purity in French culture, whilst in Italy, he did not feel ostracized for being Jewish.  His Latin looks and fluency in French (a French mother and classical education)  he could have easily have assimilated. Instead his outsider status often compelled him to introduce himself with the words, "My name is Modigliani, I am Jewish." 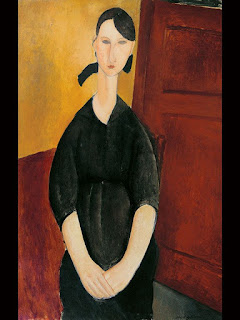 Yet he found Paris unexpectedly difficult, suffering as he did recurrent bouts of tuberculosis and struggling financially--partly because he refused to take a job or seek commissions.  Modigliani was drawn to social outsiders, such as cabaret and circus performers, and to the image of the femme fatale, characteristic of one of his first exhibited paintings in Paris, The Jewess.  Image: Portrait of Paulette Jourdain, 1919)
MODIGLIANI UNMASKED, is the first exhibition in the United states to focus on Modigliani's early works made in the years after he arrived in Paris. The exhibition on view at the Jewish Museum through February 4, 2018 puts a spotlight on Modigliani's drawings, with a large selection acquired directly from the artist by Dr. Paul Alexandre, a young physician, who became his close friend and first patron.  Alexandre amassed some 450 drawings directly from the artist and commissioned a number of portraits.
The exhibition includes a selection of drawings depicting Dr. Alexandre, as well as a mysterious, unfinished portrait, never before seen in the United States. Prominent in the collection are the stylized drawings relates to sculptures.  The influence of masks in particular is clearly visible in the many drawings and sculptures in the exhibition, which offers insights into Modigliani's signature style of graceful, elongated figures that were not well received during his lifetime. However, after his death he achieved greater popularity and his works of art achieved high prices. Seen within he scope of his brief fourteen-year career, his early work provides a context in which to reconsider what may have motivated Modigliani to develop his idiosyncratic
style of portraiture. He died of tubercular meningitis, life cut short at 35.
Ta Ta Darlings!!! Modigliani's short life reminds us to remember to make every day count and create in measure.  Fan mail welcome at pollytalknyc@gmail.com. Visit Polly's posted Blogs at www.pollytalk.com. Click in the left-hand column to links to visionary men, women determined to succeed, fashion and even poetry.
Posted by Polly Guerin at 11:22 AM