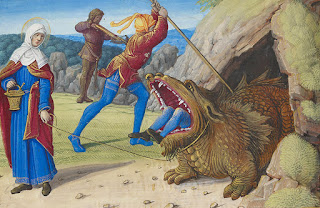 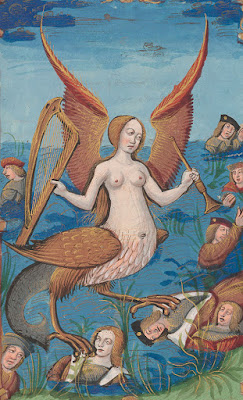 The final section, "Wonders", considers a group of strange beauties and frightful anomalies that populated the medieval world. Whether employed in ornamental, entertaining, or contemplative settings, these fantastic beings were meant to inspire a sense of marvel and awe in their viewers.                                                    Image: Siren, from Abus du Monde (The Abuses of the World) France, Rouen, ca.1510. The Morgan Library and Museum, MS M.42, fol.15r. Photography by James Chiu, 2017.                                  "In the medieval world the idea of the monstrous permeated every level of society," said Colin B. Bailey, director of the Morgan Library and Museum, "from rulers, and the nobility and the clergy, to agrarian and urban dwellers alike.  Artists of the Middle Ages captured this phenomenon in images of beings at once familiar and foreign to today's viewer."
Exhibition related firms, free with museum admission include King Kong vs Godzilla, July 13, 7 pm, Pans Labyrinth, July 27, 7 pm. Gallery Talks
include June 29 and July 20, l pm. A family program, Monstrous Masterpiece takes place Saturday June 16 11 am-1pm. Participants will join New York City-based artist Max Greis to create monstrous creatures with beastly painted paper and their favorite real and make-believe elements.
Ta Ta Darlings!!! Enough, enough, need I say more, this is a fascinating exhibit that may strike terror in your heart or amuse by the mere monstrosity of the images.
Fan mail welcome at pollytalknyc@gmail.com.  I invite you to visit Polly's Blogs at www.pollytalk.com Click on the link in the left-hand column to the Blog that resonates with your interest on fashion, determined women, visionary men or poetry.