THE GRAND TOUR at SALEM ATHENAEUM: Review By Polly Guerin

Travel today may be extremely challenging, but nothing compares to the GRAND TOUR of the 18th and 19th centuries when upon graduation young aristocratic men would set off for a Grand Tour with their tutor and servants that might last from two to five years. In a fascinating documentary exhibition, the GRAND TOUR, at the Salem Athenaeum, Salem, Massachusetts you can vicariously travel, as I did recently, to Paris, Mont Blanc, Rome, Venice, ruins at Pompeii and Vesuvius, and the Rhine. Artifacts, impressive travel guides, such as the Baedeker's (pictured) complete with fold-out maps prepared the way to adventure.

Armed with letters of introduction and letters of credit a young man's trip was composed to enlighten the young elite of England.  Fraught with danger they would cross the Channel from Dover to Calais. Sea sickness was common and during heavy storms ships were known to capsize.
Notwithstanding, adventure lured the young men on a cultural journey to acquire as much polish and knowledge as possible to complete their bearing as a noble gentleman.   Pictured: Lord George Gordon Byron, first painted in 1813 by Thomas Phillips. Among the celebrated travelers Lady Caroline Lamb, Byron's most infamous lover, declared that he was, "Mad, bad and dangerous to know."  Byron's life remains the stuff of legend, and his poetry is still read and studied worldwide.

In this captivating display of documents and books from the library's historical collections, exhibit curator Elaine Von Bruns has assembled a pamphlet entitled, "Advice for Grand Tourists which includes Cross the Alps "In case of fierce weather, be ready to clamber on hands and knees (even though you may be the son of an Earl."  The pamphlet includes quite a detailed packing list such as "Plate and Cutlery Chest, since inn cutlery will likely be filthy and the knives dull."  Then, too, protection was a major issue and be so advised, "Pistols in case of encounters with brigands and highwaymen." In Hints about "Travel in Italy" travelers are advised, "Plan to reach your destination before dark, not just from fear of bandits, but because the city gates will be closed at 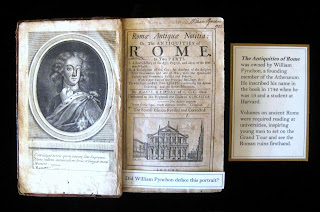 night and locked against you."
The Salem Athenaeum, 337 Essex Street, Salem, MA. 978.744.2560.
SalemAthenaeum.net
Ta Ta Darlings!  You, too, can take the GRAND TOUR at the Salem Athenaeum, just be prepared to spend some time lingering over the historical documents on display from books to letters to personal souvenirs of the long, long ago Grand Tour. Fan mail welcome at pollytalknyc@gmail.com. Visit Polly's other Blogs on visionary men, women determined to succeed, fashion historian and poetry with links in the left-hand column on www.pollytalk.com.
Posted by Polly Guerin at 9:34 AM