WITH PLANET EARTH IN A STATE OF CRISIS, A MILLION SPECIES ARE FACING EXTINCTION.
The New York Botanical Garden (NYBG) launches a new season of lectures and symposia on important and timely subjects that provoke concern NOT ONLY for a million species facing extinction but include concern for our own future existence.
Featuring renowned authors, leading scientists, specialists in horticulture and the environment, and outstanding landscape architects and designers, the NYBG line up features a roster of luminaries in the world of science. On Thursday, September 26, 10-11 a.m., Ross Hall, NYBG features the author and activist Bill McKibben, whose 1989 best seller The End of Nature first brought the issue of global warming to public consciousness. Now the stakes are even higher as climate change shrinks the spaces where civilization can exist and technologies such as artificial intelligence and robotics threaten the very nature of human experience. 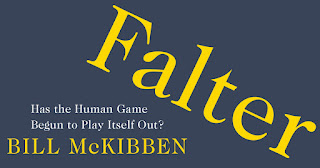 McKibben has responded with FALTER; Has the Human Game Begun to Play Itself Out?, a powering and sobering look at these converging trends, the ideological passions that present us from controlling them, and some possible ways out of the trap. Audience Q and A and book signing to follow. Location: Ross Hall, NYBG, at 2000 Southern Boulevard, Bronx, N.Y. visit WWW.NYBG.ORG to select a lecture, register, and pay by credit card. Remember, it is less than a half-hour by Metro North Train, at Grand Central to NYBG and the stop, as you might expect, is "Botanical Garden."
Another luminary on the environmental tract Sir Robert Watson will speak about the international research effort that he had reported earlier this year that one million species face
extinction if humanity does not act now to conserve and sustainably use biodiversity. His
talk, under the banner Andrew Carnegie Distinguished Lecture 2019: Sir Robert Watson will address the issue: Saving a Livable World on Thursday, October 10; 6 p.m., Manhattan Location, Christie's, 20 Rockefeller Plaza. Sir Watson will explore how vital ecosystem are deteriorating more rapidly than ever and if transformative change is not well under way in the next few years,
biodiversity will continue to be lost, and Earth's climate will continue to change.


Sir Watson, who chaired the IPBES and was Chief Scientist and Director for Environmentally and Socially Sustainable Development at the World Bank, will share the report's crucial findings nd then be joined by renowned conservation biologist and NYBG Trustee Thomas E. Lovejoy, Ph.D for a compelling conversation on biodiversity and current programs on global goals.
To access the complete fall 2019-winter 2020 line up of lectures including the 21st Annual Landscape Design Portfolios Lecture Series, Responding to the Land, and award-winning Caribbean-American writer Jamaica Kincaid, who is best known for her evocative portrayals of family relationships but who has also expanded the scope of garden writing in her essays and memoirs.
To access the full schedule of thought provoking and time sensitive subjects click on the Link for tickets and admission charges. http://www.nybg.org/content/uploads/2019/09/NYBG-Lectures-Symposium.
Ta Ta Darlings!!  Count yourself in at the International Global Climate Strike a world wide, call to action event, Thursday, Septemher 20, three days before the UN Climate Summit in NYC. Young people and adults will strike globally to demand transformative action be taken to address the climate crisis. Check it out at www.globalclimatestrike.com.
Fan mail welcome at pollytalknyc@gmail.com.  Visit Polly's other blogs at www.pollytalk.com