The Book of Ruth: Medieval to Modern at The Morgan: Review by Polly Guerin 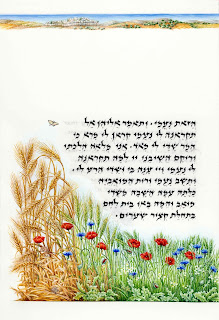 A stunning modern artistic take on The Book of Ruth is the focus of a major attraction at The Morgan Library & Museum and you have until June 14, 2020 to see the exhibition THE BOOK OF RUTH: MEDIEVAL TO MODERN.
The story of Ruth has been recorded in ancient manuscripts but this exhibition introduces an interpretation of remarkable skill and innovative interpretation. It celebrates the gift of Joanna S. Rose of the Rose Book of Ruth to the Morgan Library & Museum. The accordion-fold vellum manuscript, measuring nine inches tall and an astonishing eighteen feet long was designed and masterfully illuminated by New York artist Barbara Wolff who worked tirelessly on the project two years  (2015-17). The complete biblical text of the book of Ruth is written in Hebrew on one side and in Engish on the other side the work of Izzy Pludwinski  The Hebrew side features twenty colored illustrations and a continuous landscape with accents and lettering in silver, gold and platinum; the English side has forty executed in black ink. The manuscript is housed in a modern "treasure binding" a custom designed box in shot silk and decorated with 24-carat gold lettering that reads "Your people shall be my people and your God shall be my God in Hebrew.  The Book of Ruth speaks of  courage and devotion. Ruth and her daughter-in-law craft the means of their survival, and their strength helps build the foundation of the House of David.
Visitors will discover how Wolff was inspired by the techniques of medieval illumination. Her approach iconography, however, differs from that of her medieval forebears. Medieval illuminators illustrated pivotal events in the biblical narrative by depicting people involved, mainly Naomi and her family, Ruth and Boaz---arranged like characters on a stage set. Wolff takes a different approach. On the Hebrew side of her manuscript she paints few human figures, illustrating instead such elements as a landscape, harvest grains, flowers, a sandal and a significant wedding belt to tell the story. Image: The Barley of  Beth-Lechem. The Joanna S. Rose illuminated Book of Ruth in Hebrew and English. United States New York, and Israel, Jerusaleum 2015-17. Commisioned by Jonnna S. Rose, written by Izzy Pludwinski, designd and illustrated by Barbara Wolff, Ms M 1210. fol 9r. Gift of Joanna S. Rose, 2018. The Morgan Library & Museum. Photography by Rudi Wolff. Artwork (c) Barbara Wolff.  The vignettes on the English side function almost like an archaeological gloss to the text, illustrating tools, weights, pottery and other artifacts of the early iron age, in which the story is set. With no Jewish tradition for illustrating the book of Rufh, Wolff created her own illustrative scheme, one in which the characters are evocatively conjured up by the objects they would have touched, handled or worn. 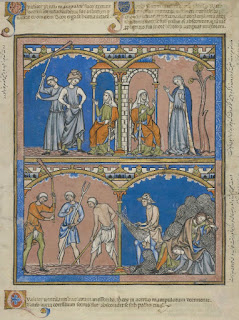 The Book of Ruth is presented in conversation with twelve manuscripts from the Morgan's holdings, that unfold the
the Christian traditions for illustrating the story of Ruth
during the Middle Ages. Through the juxtaposition of the modern manuscript with these ancient works, which date from the twelfth to the fifteenth century and include three
leaves from the Morgan's famed Crusader bible, the exhibition brings into focus the techniques of medieval illuminators that inspired Wolff , as well as her innovative
approach to iconography. IMAGE: Ruth threshing and bringing grain to Naomi. Naomi counseling Ruth workers
threshing grain. Ruth lays at the feet of Boaz. "Crusader
Bible," added inscriptions in Latin, Persian and Judeo-Persian . France, Paris ca 1250. MS M 638, fol. 18r. Purchased by J. P. Morgan, 1916. The Morgan library & Museum. Photography by Janny Chiu, 2018, RELATED
PROGRAMMING:Your People Shall be My People Illuminating the Book of Ruth March 27, 7 pm, May 19,
3 pm and June 8, 7 pm. Lectures and Discussion: Join Roger Wieck, Melvin R. Seiden Curator and Department head of Medieval and Renaissance 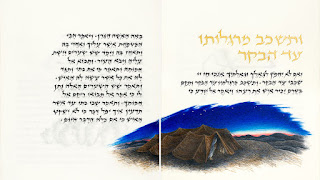 Manuscripts and artist and illuminator Barbara Wolff at they discuss Wolff's contemporary work  and the ancient historic traditions. For detailed info contact www.themorgan.org. IMAGE: Ruth departing the tent of Boaz.
Ta Ta Darlings! This is jewel of an exhibit.  I suggest you bring a magnifying glass to get a closer view of Wolff's delightful objects that serge as storytelling images of what people wore or the work they engaged in Biblical times and their interaction with one another.  Fan mail welcome: pollytalknyc@gmail.com.