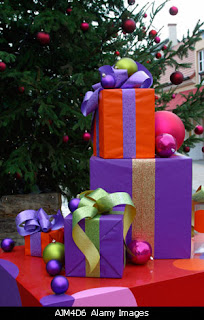 Look to the stars and fill your heart with dreaming as New York sparkles with a thousand dazzling lights, snowflakes float in the air, huge red lit bows embrace a building and the Empire State Building lights up red, green and white. For surely it is true, the holidays are here, so be of good cheer and let us celebrate this wondrous season. Here’s the scoop!!!
THE CERAMIC SHOW bows with the perfect personal touch gifts for holiday giving at the Westbeth Community Room, 155 Bank Street (between West & Washington Sts.) The Friday Night Preview on Dec. 18th gives you a first chance at the beautiful handmade ceramic bowls, platters, vases and mugs. This year there’s also a unique jewelry selection featuring pieces made of ceramic and bead also silver and precious stones. Sip a glass of wine from 6 to 9 pm and get into the holiday spirit. Sixteen local ceramic artists present original wheel and hand built one-of- a- kind pieces. Mostly the signature signed, these pieces are lasting treasures for that special person on your list or they make it a collectible purchase just for yourself. Open Saturday, Dec. 19th from 12 to 7pm.
LITTLE IMP: You’ve heard of Eloise at the Plaza well here comes HENRY AT BROOKS BROTHERS. Henry, a precocious young boy, loved shopping there so much that he hid in the racks until the store closed so that he could spend the night. This mischievous imp proceeded to dress mannequins in some of the store’s finery and even paraded around in the famed Lincoln’s jacket. Just in time for holiday shopping Henry is the character in a new children’s book, “Tales from Brooks Brothers; Henry’s Unsuitable Adventure.” written by Mike Reiss, illustrated by Dara Goldman and based on a character created by the company’s public relations director, Arthur Wayne. Visit Brooks Brothers and pick up a copy of Henry’s adventures at, 346 Madison Ave., www.brooksbrothers.org.
VINTAGE LOVERS: Remember Flair magazine, Fleur Cowles amazing magazine with pop up features and iconic design, which I wrote about in my blog amazing art deco divas? Well, Flair is still influencing the creative genre and here comes VINTAGE, a new title influenced by Flair. The print run is of only 1,500 copies with a cover price of $20, a biannual that is something of a limited edition. The premier issue is hand-bound and features quirky design elements: A story about record jackets by former Village Voice columnist Gary Giddins is presented in cutouts that resemble a 45 rpm record, and a piece on bygone hairstyles has a flip book-like construction. Launched by Ivy Baer Sherman. Barbie and Forties recipe cards round out the retro package. Sold at specialty bookstores, including Rizzoli on 57th Street in New York. Sherman alludes to the fact that people still like to sit down with a book, and Vintage proves that.”
JANE AUSTEN AT THE MORGAN: In an age when email has so often replaced the art of letter writing it is comforting to see 19th century letter writing firsthand in the Morgan Library’s exhibit of Jane Austen’s missives, “A Woman’s Wit,” now on view and through March 14th. Like Elizabeth Barrett Browning, Austen conserved precious writing paper as carefully as possible. Austen typically used a single sheet, folded in half to make four pages. However, when she ran out of room, she filled the margins, writing perpendicular to the body of the letter, and then, if she had still more to say, she would continue across her own script—EBB did the same. Austen once said, “I have now attained the true art of letter writing, which we are always told, is to express on paper exactly what one would say to the same person by word of mouth.” Treat yourself and a friend to the Morgan, 225 Madison Ave. at 36th Street. 212.685.0008. www.themorgna.org. To get further connected to Jane join the Jane Austen Society of North America JASNA 1.800.836.3911 and check out the website www.jasnaNY.org.
Well Ta Ta darlings, as you know I’m a total fan of Fleur Cowles and FLAIR so I’m off to get my premier copy of VINTAGE and cozy down in a comfortable chair with fireplace ablaze on a cold winter’s night. Fan mail to pollytalk@verizon.net or visit blogs: http://www.amazingartdecodivas.blogspot.com, http://www.thefashionhistorianpollyguerin.blogspot.com. Wishing you a very Happy Holiday!!!
Posted by Polly Guerin at 7:47 AM