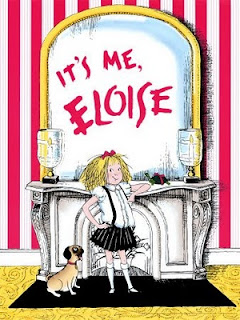 POLLYTALK FROM NEW YORK ©
By Polly Guerin
January 4, 2010
NEW YORK CELEBRATES THE NEW YEAR 2010
To health, to happiness to cheer, clean the slate, it’s a new year, a brand new start, a new beginning, finish off the year, and know you’re winning. Seize the moment, lose track of time, taste life, dare yourself to be divine. Make very minute count, say “Yes!” This year will surely be your best. Here’s the scoop!!!
CALLING ALL GIRLS AND WOMEN YOUNG AT HEART. That mischievous children’s book character, ‘ELOISE’ now has a store to call her own at The Plaza Hotel. decorated in her signature color PINK and a rug imprinted with memorable lines from Kay Thompson’s legendary story. Legend has it that Thompson’s goddaughter; Liza Minelli, at one point lived at The Plaza with her mother, Judy Garland, and was perhaps the inspiration for the rambunctious icon. But plenty of others, including Thompson herself may have been the source. Fans will be able to host tea parties, play dress up and listen to story hours in the months ahead and if needed take etiquette classes. The Plaza, 59th Street and Fifth Avenue.
Feast your eyes on a fine romance and see THE YOUNG VICTORIA in the turbulent first years of her reign with Prince Albert, the suitor who wins her heart and becomes her partner in one of history’s greatest romances. The movie is set among the intrigue of the court. Everyone is dying for her favor, but Victoria is kept from the court by her overbearing mother, The Duchess of Kent. But not for long! Once she becomes queen, Victoria gets to make her own decisions and her lavish fashion persona becomes more sophisticated. Albert for his part cuts a dashing figure. Alas this film is about Victoria and it evokes a stunning visual display of the period and an insider’s view of the young Victoria. In theaters locally.
“SNOPPY AS THE WORLD WAR I FLYING ACE” presents Charles M. Schulz’s lovable beagle, SNOOPY, as his alter ego, the Flying Ace in an exhibit at the Intrepid Sea, Air & Space Museum through April 30, 2010. The exhibit showcases Snoopy’s imaginary journeys through the skies of Europe in his transformed doghouse. Accompanying Schulz’s scenes of Snoopy as a flying ace is artwork featuring the peanuts gang that was created by crewmembers serving aboard the USS Intrepid. Passing the time at sea the images, painted directly on the ship’s steel walls, reflect the politics, morality and American popular culture of the time. This unique display of the “sailor art’ expressed the hopes, pride, frustrations and even boredom of the men serving on the ship. Intrepid Sea, Air Space Museum, at Pier 86 (46th Street and 12th Avenue).
The musical of Oscar Wilde’s “The Importance of Being Earnest,” takes center stage as EARNEST IN LOVE at The Irish Repertory Theatre and what a jolly romp it is. The wickedly entertaining musical features all of its beloved characters…Lady Blacknell and the crème de la crème of London society singing and dancing to brilliant dialogue of the comic masterpiece. This wonderful music and lyrics faithfully re-create a time when wit and grace ruled the world and the right kind of address and proper behavior was paramount. The lush period costumes and clever score are the perfect complement to Oscar Wilde’s incomparable wordplay and sharp witticisms. Not to be missed: 132 W. 22nd St. 212.727.2737.
Well, there you are my darlings. Ta Ta!!! I’m off to check out Eloise’s digs at The Plaza. Perhaps the little imp is hiding somewhere ready to spring out shout, ‘Have Yourself a very Happy New Year.’ Fan mail always welcome: pollytalk@verizon.net. Visit blog: http://www.amazingartdecodivas.blogspot.com, and for fashion: http://www.thefashionhistorianpollyguerin.blogspot.com.
Posted by Polly Guerin at 6:42 AM

Labels: Earnest in Love, ELOISE at The Plaza, Snoppy, Victroria