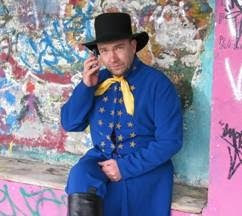 As the chill of winter sweeps into town the whirlwind of cultural events in the Big Apple invites you to hunker down indoors. On the scene: Global Artists, an Ancient Egyptian General, the Inventor of Basketball and Weimar Cinema, but bundle up outdoors. Here’s the scoop!!!

ARTIST TALK: KRISTAPS GULBIS >>>>
As we welcome this year’s group of ArtsLink Fellows to their residencies in the US, they return the favor by giving us a glimpse into their own working methods and the contemporary art scenes in their home countries. Kristaps Gulbis, a Latvian artist and sculptor, (photo above) will discuss his public art practices and recent international projects and tell us about his residency experience at LMCC’s New Arts Center at Governor’s Island where the artist maintains a studio at Building 110 through Nov. 17th. The Artist’s Talk, Free and open to the takes place Thursday, Nov. 4th, 6-8 pm, at the Lower Manhattan Cultural Council, 125 Maiden Lane, 2nd floor, followed by wine reception.
HAREMHAB, THE GENERAL WHO BECAME KING
One of the most fascinating pharaohs of ancient Egypt, Haremhab was a strong leader in a time of political and religious transition. As commander-in-chief of Tutankhamun’s army, he oversaw important military campaigns and later as the last King of Dynasty 18, he instituted laws that secured the rights of civilians and curbed abuses perpetrated by powerful groups. Haremhab is the inaugural presentation in a series of exhibitions that will spotlight masterpieces from the Metropolitan Museum of Art’s collection of Egyptian art. 1000 Fifth Ave. Opens Nov. 16th.http://www.metmuseum.org.
BASKET BALL INVENTOR
“Sotheby’s to Sell the Rules that invented the game of Basketball.” Sports enthusiasts and historians check this out. The game “Basket Ball” was the invention of a 30-year old physical educator teacher named James Naismith, who in December 1891 posted a two-page typed document comprising a set of 13 rules to a new, game at a Springfield, Mass. YMCA gym to entertain a restless class of students during the winter months. The two-page typescript started it all with more than an estimated 450 million playing Basketball today. The document on view at Sotheby’s, 72nd St. & York Ave. At auction Dec. 10th it is estimated to bring more than $2 million.
WEIMAR CINEMAS, 1919-1933
MOMA presents the most extensive exhibition of Weimar cinema ever mounted in the United State. Daydreams and Nightmares, Nov. 27-March 7, 2011 surveys the extraordinary fertile and influential period in German filmmaking between the two world wars. The 4-month series includes over 80 films, many rare—a mix of classic films and many motion pictures unseen since the 1930s opens with “Into the Blue” (1929). A selection of original Weimar movie posters and photographs augment the film presentations at The Roy and Niuta Titus Theater, 11 W. 53 St., www.moma.org.
Ta Ta darlings!!! By the way if you haven’t seen the movie, “Inside Job,” DO! This riveting movie tells the story of the economic collapse of 2008 with interviews with key players who perpetrated the debacle. Fan mail always welcome: pollytalk@verizon.net. For a list of Polly’s Blogs go to: www.pollytalk.com and in the right hand column find the link to the Blog of your choice.
Posted by Polly Guerin at 7:56 AM