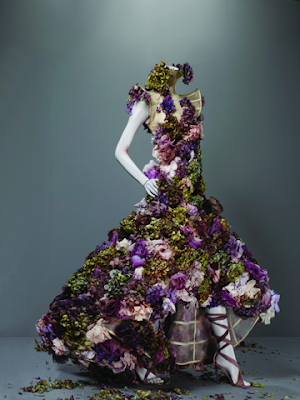 Art is fashion, fashion is art and the MET roof is alive with monumental sculptures, while antique dealer lectures and lady collectors delight in a spring splurge of openings. The best of New York my friends, The best of New York. Here’s the scoop!!!
SAVAGE BEAUTY, Alexander McQueen Fashion in the extreme!!!
The Metropolitan Museum of Art’s spectacular homage to the late British Fashion designer Alexander McQueen (1969-2010) showcases 100 ensembles and 70 accessories from the designer’s career, mostly exceptional creations, pieces that dramatized a seasonal fashion show’s finale. His couture level artistry included armadillo-shaped heels worn by lady Gaga and his famous ‘bumster” new shape trousers coveted by every fashionista from coast to coast. From May 4 to July 31, the Costume Institute at the MET. www.metmuseum.org.
ON THE ROOF, Cocktails with Anthony Caro’s Sculptures
The most influential and prolific British sculptor of his generation Anthony Caro’s monumental steel sculptures steal the view on The Metropolitan Museum of Art’s Roof Garden where the massive forms create a dialogue between sculpture and the unparalleled views of the New York City skyline. See the large scale works during the cocktail hour when the Martini Bar offers several cocktails named after the sculptures such as the Midday Martini, named after ‘Midday’ the giant yellow sculpture; the cocktail Blaze On inspired by ‘Blazon,’ the compelling brick red behemoth, and the After Summer libation named after the breathtaking sculpture ‘After Summer.’ On view April 26-October 30. Next year Caro’s undulating, three- block steel sculpture will dominate the Park Ave. center malls from 59 to 62nd St. Remember you hear it on Pollytalk first.www.metmuseum.org.
COLLECTING MATISSE AND MODERN MASTERS
Henri Matisse called them “My two Baltimore ladies.” Their friend Gertrude stein wrote a poem about them entitled, ‘Two Women.’ The sisters Dr. Claribel Cone and Miss Etta Cone began buying art directly out of the Parisian studios of avant-garde artists in 1905 including Picasso who was virtually unknown at the time. The Cones followed their passion and eventually amassed one of the world’s greatest art collections including Matisse, Gauguin, Renoir, Cezanne and van Gogh. The Jewish Museum presents over 50 works from the Baltimore Museum of Art’s renowned Cone Collection from May 6 through Sept. 25. In addition to masterworks of French art, the exhibition includes textiles and decorative arts, some of which have never been seen in NYC before. www.thejewishmuseum.org.
CELEBRATED LECTURE SERIES AT AADL
The Inaugural Spring Show of the Art and Antique Dealers League of America’s lecture series features lively discussions by prominent international museum curators, scholars and prominent interior designers. Thursday, April 28 at 11:30 am, Le Bon Marriage, The French Alliance of Modernism and the Luxury Trades with Derek E. Ostergard; at 3 pm, Architecture for Animals: Menageries and Aviaries in 18th and 19th-Century England with Tim Knox. On April 29, 11:30 Beauty and Art in the Living Jewel with Ruth Peltason and at 3pm Decorating with Antiques for Today with Mario Buatta. Sat. April 30 at 11:30 am Marie Antoinette in America with Ronald Freyberger. Park Avenue Armory, 67th and Park Ave. April 28-May 2. 11 am to 7:30 pm; and Monday May 2; 11 am to 5 pm. $20 Adm., five-day pass $40. www.springshownyc.com.
Ta Ta darlings!!! I’m taking to the skies on the MET roof and sipping my Blaze On cocktail. Fan mail welcome: pollytalk@verizon.net. To view Polly Blogs go to www.pollytalk.com and in the right-hand column click on the link to the Blog of your interest. There are five Blog choices.