AR VERNISSAGES ALL AROUND THE TOWN (c) By Polly Guerin 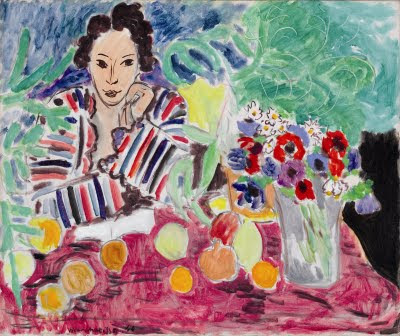 Eastside/Westside all around the town rich cultural venues in galleries and museums reach new heights of entertainment from an exhibition devoted to Picasso’s muse, contemporary art at Sotheby’s, the Cone Sisters collection to McQueen the wizard of fashion art. It’s the best of New York my friends, the very Best of New York. Here’s the scoop!!!
PICASSO AND MARIE-THERESE “L’Amour Fou” The woman at the show at the Gagosian Gallery is Marie-Therese Walter, called the greatest sexual passion of Picasso’s life. Not only was she his submissive sexual conquest, artistic muse and the mother of his daughter, she is credited with bringing Picasso out of Cubism into the fleshy portraits infused with color, decoration and sensuality. The mistress was seventeen, he was 45, and she had never heard of Picasso but became his longtime secret between-the-wars mistress-muse for ten years. In the 80-work show the many guises of Marie-Therese are portrayed but most fitting to their clandestine relationship he sews her mouth shut to indicate the close-lipped secret affair that he was hiding from his wife Olga. At Gagosian Gallery, 522 W. 21st St., through June 25. 212.741.1717.
KOONS’ PINK PANTHER
Sotheby’s Contemporary Art auction will be led by Jeff Koons' iconic Pink Panther. One of the most important works by the artist, the porcelain figure of a bare-breasted blonde hugging the Pink Panther is showcased in a mirrored alcove as the statue revolves in a glittering display of sensuality. All of the art including major works by many leading artists of the 20th and 21st centuries are on view from May 6 to April 29; the auction takes place on May 10. On May 25 Sotheby’s will present “A Discerning Eye,” a remarkable single owner sale that includes a delightful miniature of Frida Kahlo, just 2 inches in height, the smallest self-portrait of the Mexican painter for her lover, the artist Jose Batoli, who kept the small treasure in his possession for over 50 years. Pre-sale exhibition opens on May 21. Sotheby’s New York, 1334York Ave. @ 72nd St. 212.606.7000.
THE CONE SISTERS OF BALTIMORE
Claribel and Etta Cone began buying art directly out of the Parisian studios of avant-garde artists in 1905 and eventually amassed one of the world’s greatest art collections including works by such artists as Gauguin, Renoir, van Gogh and Cezanne. They followed their passion and discovered the unknown Pablo Picasso and included Henri Matisse and Gertrude Stein among their friends. In addition to the masterworks of French art, textiles, decorative arts, photographs and memorabilia provide an insight into the Cone sisters’ remarkable story. “Collecting Matisse and Modern Masters” exhibit at The Jewish Museum opens May 6. http://www.thejewishmuseum.org. Pictured above from the Cone Collection, Henri Matisee, Striped Robe, Fruit and Anemones. (1940)
THE MET’S EXTRAVAGANZA
Homage to the late Alexander McQueen at Monday night’s gala took on a Scottish theme with bagpipers to wood décor and a verdant garden ambiance. Prior to gala night Daphne Guinness honored the designer publically getting dressed in a window of Barney’s Madison Avenue store for street viewers to see her stepping into McQueen’s floor-length gown made out of ostrich features. A stunning list of celebrities turned out to pay tribute to the daring designer wearing dramatic curve-hugging silhouettes to fabulous, frothy ball gowns everywhere. There was the macabre as well, such as the scene “Highland Rape,” in a destructed scene with mauled models. The spectacle at the Metropolitan Museum of Art’s Costume Institute, 1000 Fifth Ave., from May 4-July 31. http://www.metmuseum.org/.
Ta Ta darlings!!! Picasso’s amazing oeuvre at Sotheby’s includes his surrealist “Woman,” but I’m also heading West to the Gagosian to see the many faces of Marie-Therese. Fan mail to pollytalk@verizon.net and for Polly Blogs go to www.pollytalk.com and in the right hand column click on the link to the Blog of your interest.