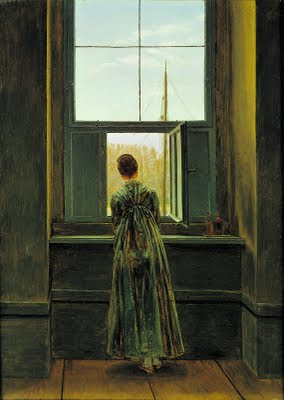 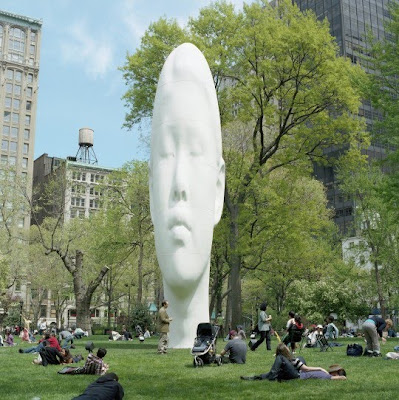 Art, Literary Celebrities and sculpture venues provide dazzling intellectual culture in the Big Apple, and most are free for the viewing. It’s the Best of New York my friends, the very Best in New York. Here’s the Scoop!!!
'ECHO' IN MADISON SQUARE PARK It’s startling, it’s amazing!!! Among the trees on the central Oval Lawn of Madison Square Park Spanish sculptor, Jaume Plensa’s 'ECHO' a 44-foot-tall sculpture of an elongated white head overpowers the view. A monument to everyday people the fiberglass-reinforced sculpture of the head and neck of a young girl, its monumental size and vertical orientation, reflects the architecture surrounding the park, yet the sculpture exudes a welcoming tranquility in this urban oasis. Location: 23rd Street and Fifth Avenue. www.madisonsquarepark.org. ROOMS WITH A VIEW The Open Window in the 19th Century is the Metropolitan Museum of Art’s small but elegant exhibition gives us a peak into the refined interiors of houses where singular people peer out of windows in melancholy repose or lover’s chat by an open window and the artist’s studio of Caspar David Friedrich with its spare interior enchants with its spare floor boards and casement window. Most fetching is “Woman at the Window” (1822) by Friedrich pictured above. As sunlight streams through the window one only can imagine that she is dreaming of some far off reverie. A precious exhibition both nostalgic and winsome. Through July 4, 2011. www.metmuseum.org. A LITERARY CELEBRITY: LETITIA ELIZABETH LANDON A woman determined to succeed, in her day Letitia Landon was an international literary celebrity, whose works were widely circulated throughout the British Isles, on the Continent, and in the United States. Her success as a young single woman carving out an independent career in the tough arena of literary London in the 1830s is also profiled in Polly’s Blog: http://www.amazingartdecodivas.blogspot.com. On view through May 27th at the Grolier Club 47 East 60th Street are manuscripts, first editions, prints, photos, and other materials that illuminate the life and art of a leading British writer of the late Georgian and early Victorian period. www.grolierclub.org. FREE of charge, Monday-Saturday, 10am to 5pm. ILLUMINATING FASHION Dress in the Art of Medieval France and the Netherlands explores the evolution of fashionable clothing in Northern Europe drawn from The Morgan & Library’s collections, over fifty illuminated medieval and Renaissance manuscripts and early printed books are feature. The exhibition demonstrates the richness of symbolism and how artists used clothing and costume as codes to help viewers interpret an image. In these works of art, what people wear is a clue to their identities and moral character. Discover for yourself. Exhibit May 20 through September 4, 2011. www.themorgan.org.
Ta Ta Darlings!!! I am dashing off for the press preview of Illuminated Fashion to hopefully shed light on historical costume. Fan mail welcome: pollytalk@verizon.net. Polly Blogs: www.pollytalk.com and in the right hand column click on the link to the Blog of your interest.
Posted by Polly Guerin at 2:05 PM