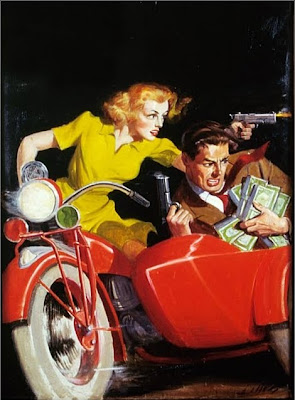 Why travel the globe when New York City is a dream vacation. Just stay put and invest in the Big Apple’s diversified venues from pulp art to a musical hit at its best, free movies and dining at Sardi’s. It’s the best of New York my friends, the very Best of New York!!! Here’s the scoop!!!
PULP ART: The Robert Lesser Collection. When Americans needed an escape from the harsh reality of day to day life pulp magazines provided the fantasy escape. This is a rare opportunity to view an almost forgotten art form because very little of the work, often by leading illustrators of the time remains today. Lesser said, this “unique American (art) form combined all the elements of the male imagination during the Great Depression.” An exhibition of 88 rare paintings created for the front covers of popular fiction magazines in the first half of the twentieth century are colorful, bold eye-catching adventure-charged scenes which pushed the boundaries of what was then acceptable to society. With a hint of six, rescued maidens, murder and mayhem the original oil paintings like the one pictured here "Fleeing in a motorcycle and sidecar after their heist" by Richard Lillis is on view at the Museum of American Illustration at the Society of Illustrations through July 30th, 2011. FREE admission at 128 E. 63rd St., Tues. 10-8pm, Wed-Fri 10am to 5pm and Sat. 12-5pm. Visit www.societyillustrators.org.
BABY it’s YOU! Polly’s Theater Pick of the Week is one of the best musical hits on Broadway. Though I’m a devotee of classics and baroque I was blown away by The Shirelles with a high voltage cast re-enacting the story of how Florence Greenberg, a New Jersey housewife-turned-mogul, discovered four black teenage girls singing in a playground and turned it into one of the music industry’s greatest success stories, the Shirelles, one of the most successful girl groups of the early 1960s. No ordinary woman, Greenberg founded a record label and changed the face of pop music. They were a million dollar quartet, climbing the charts with such hits as “Soldier Boy,” “Will You Love Me Tomorrow,” and the title tune, “Baby its You!” You’ll be dancing in the aisles. At the Broadhurst Theatre, 235 W. 44th St.
A WEEKEND OF FREE FILMS June 10-12 in Lincoln Center’s first movie multiplex, the Elinor Bunin Monroe Film Center. There will be a marathon of choices from Ran to Pulp Fiction. For Film schedule and Free Tickets visit www.filmlinc.com. West 65th Street, between Amsterdam & Broadway. The official opening is June 17th with “Page One,” inside the New York Times, a documentary about The Times newsroom. General Admission $30. www.TimesTalks.com or call (888) NYT-1870.
SARDI’S, Polly Restaurant Pick of the Week. To hang your picture on the wall of Sardi’s is to make your mark on the history of the American stage. Broadway’s hall of fame started in 1927 when Mr. Sardi was brainstorming about ideas to increase business. Taking a cue from Joe Zelli’s in Paris where the walls were covered with caricatures of celebrity patrons, Mr. Sardi hired Alex Gard, a Russian refugee who pledged to exchange caricatures for two meals a day. Sardi’s remains the “Toast of Broadway” and one can dine quite reasonable from a classic cuisine menu to veggies and tofu but do ask for the Sardi’s original, Baccone Dolce dessert, a sweet mouthful of meringue, fresh strawberries, whipped cream and a touch of chocolate. 234 W. 44th St. Reservations: 212.221.8444. www.sardis.com.
Ta Ta darlings!!! I’m going inside the New York Times newsroom checking in at the new film multiplex at Lincoln Center. Fan mail welcome pollytalk@verizon.net. Polly’s Blogs can be accessed at www.pollytalk.com, just click on the Blog of your interest in the right hand column.
Posted by Polly Guerin at 5:06 PM