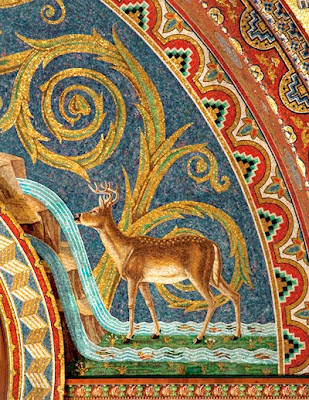 New York City is a living museum of art and culture. One need only step into a landmark building and find the most exquisite art treasures as chronicled at MOBIA or put yourself in the front row of the runway shows during Fashion Week. It’s the Best of New York my friends, the very best to cultivate our minds with beauty and culture. Here’s the scoop!!!
WALLS SPEAK: THE NARRATIVE ART OF HILDRETH MEIERE New York is a virtual museum, a living testament to its reputation as the Art Center of the World. Just walk into any of New York Metropolitan areas most iconic places of worship and view the liturgical designs that adorn Temple Emanu-El ; Saint Bartholomew’s Church; St. Michael’s Passionist Monastery Church in Union City, New Jersey and other religious landmarks and discover the versatile Art Deco muralist Hildreth Meiere (1892-1961). Image: Meiere's Raindeer Her path-breaking work is the focus of Meiere’s magnificent work for synagogues and churches and is the subject of MOBIA, the Museum of Biblical Art’s new exhibition Wall Speak on view through May 20, 2012. You will rediscover a major American muralist whose cutting edge approach to design, material and technique propelled her to prominence at a time when few female artists had gained acceptance and whose artistry richly enhanced sacred places. Read Polly’s biographical article on Hildreth Meiere Google: http://www.amazingartdecowomen.blogspot.com. MOBIA is located near Lincoln Center at 1865 Broadway at 61st Street. Suggest admission $7, FREE on Sundays. Visit www.mobia.org.
HAPPY BIRTHDAY, CHARLES DICKENS Just mention Dickens’s 200th birthday on February 7th (he was born February 7, 1812 in Portsmouth, England) and you will receive FREE ADMISSION TO THE MORGAN LIBRARY & MUSEUM’S celebration of the great writers bicentennial year. Free Admission applies to every exhibition at the Morgan, so after viewing the exhibition, you are welcome to explore the rest of the museum. The Morgan’s collection of Dickens manuscripts and letters is the largest in the United States and one of the greatest in the world. It’s a great chance to view Charles Dickens at 200, an exhibition that captures the art and life of a man who literary and cultural legacy ranks among the giants of literature. Original manuscripts of A Christmas Carol and Our Mutual Friend (a portion of which Dickens retrieved from the wreckage of a train crash), letters, books, photographs and original illustrations await your pleasure. On view through February 12th. http://www.themorgan.org/
NEW YORK FASHION WEEK begins this Thursday and while fashion weeks were once invitation-only trade show events, where department store buyers, magazine editors and fashion cognoscenti were the privileged patrons, don’t fret if you're not invited. Now you can get in on front row viewing of the runway events by live-stream shows and mobile apps, making it possible for you to view designer collections on the runway just as they are taking place. While most of the 200, Fall 2012 Fashion shows will take place at Lincoln Center the season will also reach consumers overseas, particularly the wealthy Chinese, who have become prodigious fashion buyers. After New York, the Fashion Capital of the World, the shows move on to London, Milan and finally Paris, ending in March. For more info: www.com/fashion-news.
IMPACT: FIFTY YEARS of the CFDA celebrates the 50th anniversary of the Council of Fashion Designers of America (CFDA), the leading fashion trade organization in the United States, with approximately 100 garments and accessories designed by the CFDA’s most impactful creators of the last 50 years will be on view from February 10 through April 20, 2012 at The Museum at the Fashion Institute of Technology. FREE admission. Also included in the exhibition are visual images and acknowledgment of the nearly 600 designers who have been members of CFDA for the last 5 decades. The exhibition is organized thematically to illuminate the broad spectrum of American creativity, from functional sportswear to couture-quality evening wear. Museum hours: Tues.-Fri. noon-8pm; Saturday 10-5pm. www.fitnyc.edu/museum.
Ta Ta darlings!!! I’m spreading my wings and taking it all in this week. MOBIA for one is an enriching experience. Fan mail welcome: pollytalk@verizon.net. Visit Polly’s Blogs at http://www.pollytalk.com/ and click in the left-hand column the link to the Blog of your interest. Suggestion: http://www.thefashionhistorianpollyguerin.blogspot.com.