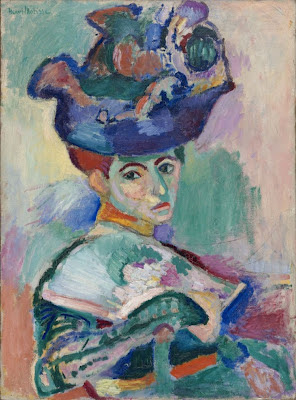 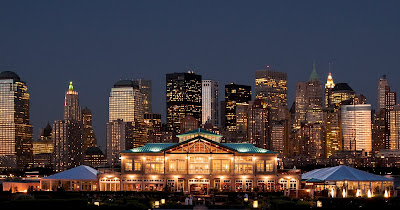 Matisse, Woman with Hat
It is the best of times and the most prolific of times because New York City’s art lovers need only head for museum mile to find the richest deposit of art treasures in the world. Here’s the scoop!!!
Photo: Liberty House at night in Jersey City.
THE STEINS COLLECT: Matisse, Picasso, and the Parisian Avant-Garde exhibit at the Metropolitan Museum of Art unites some 200 works of art that demonstrate the significant impact the Stein’s patronage had on modern art, albeit collecting relatively unknown artists at the time with whom they became friends. Just as the Steins opened their apartment on Saturday evenings to anyone who arrived with a reference in hand, you too can vicariously enter the Stein’s salon and view the early works of Matisse and Picasso, and scores of other painters such as Pierre Bonnard, Jacques Lipchitz, Henri Manguin and many others. It is the story of one American family not rich, but collectors by nature, who shaped the development of modern art for decades to come. Do stop and see Gertrude Stein’s musical Four Saints in Three Acts with the enchanting models for both settings and costumes by American artist, Florine Stettheimer. www.metmuseum.org. Image: Henri Matisse (French 1869-1954) Woman with a Hat, 1905 © Succession H. Matisse/Artists Rights Society (ARS), New York.
IN THE COMPANY OF ANIMALS: Art, Literature, and Music. The new Morgan Library & Museum’s exhibition explores how the relationship between animals and the artistic imagination have provided a particularly fertile source of inspiration for artists, writers, and composers for centuries. Animals are everywhere from ancient depictions with fearsome lions and mythical beasts, to Biblical scenes, to more recent portrayals of endearing animal figures in children’s stories, such as Babar and Winnie the Pooh. On view the varied role of animals as symbols, muses, moral teachers, talking creatures and beloved companions and how they communicate important ideas and themes. In Talking Creatures a child’s definition of an animal (1951) “An animal is something you feel like talking to.” Through May 20. www.themorgan.org.
THE QUEEN OF SELF-PORTRAIT, Cindy Sherman is the subject of MOMA’s groundbreaking retrospective of the artist’s career from the mid-1970s to the present. A photographer and filmmaker known for her conceptual self-portraits Cindy gets her due with more than 180 key photographs from the artist’s significant series including the complete “Untitled Film Stills” (1977-80) centerfolds and her celebrated history portraits. Masquerading as a myriad of characters in front of her own camera, Sherman creates extraordinary invented personas and tableaus. Through June 11th. MOMA 11 W. 53 St. www.moma.org.
LIBERTY HOUSE…Polly’s restaurant pick of the week is over the river by Water Taxi to Frank and Jeannne Cretella’s landmark hospitality restaurant in Liberty State Park with spectacular views of the New York Skyline at 76 Audrey Zapp Drive, Jersey City. Come spring and summer it’s the perfect vicarious day trip where the food is international with an American twist and the meals are served with an artistic presentation that is as delightful as the food itself. www.libertyhouserestaurant.com. 201.395.0300. Call for directions by car via the Holland Tunnel.
Ta Ta Darlings!!! I was delighted with Florine Stettheimer's costumes and sets for Four Saints in Three Acts and urge you to see the Steins Collect. Fan mail welcome: pollytalk@verizon.net. Visit Polly’s fashion, poetry or determined women Blogs at www.pollytalk.com, just click in the left-hand column on the convenient links.
Posted by Polly Guerin at 11:32 AM