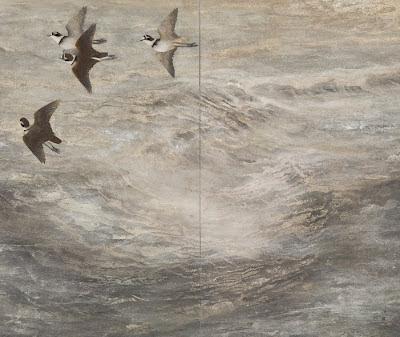 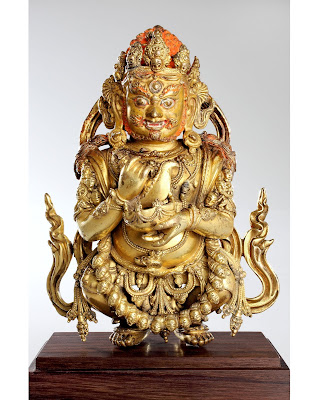 Asian art specialists, auction houses, and 17 museums and cultural institutions celebrate the surging world-market for Asian Art, antiques and design during ASIA WEEK in New York 2012, which runs from March 16 to March 24 with museum exhibitions, lectures and special events. The nine-day celebration is filled with a non-stop schedule of simultaneous gallery open houses which will exhibit the rarest and finest treasures of Asian art and antiques. To help visitors easily navigate the week’s myriad activities, a comprehensive 88-page guide and map will be available at galleries, auction houses, and cultural institutions & www.AsiaWeekNewYork.com. It’s a rare opportunity to participate in this Asian Adventure and I mention but a few highlights to encourage your participation. Here’s the Scoop!!!
CARLO CRISTI from Daverio, Italy presents “Tibetan and Indian Arts and Central Asian Textiles, and features a superbly modeled and finely detailed 15th century Yongle bronze of Mahakala from Tibet and 7th and 8th-century silks from Central Asia. At Arader Galleries, 1016 Madison Ave.
FRANCESCA GALLOWAY joins Asia Week from London and shows “Indian miniatures & Courtly Objects,” including depictions of yalis, mythological felines seen mainly in Hindu temples in South India as well as other parts of India. At the Leslie Feely Fine Art, 33 East 68th St.
KOONEW YORK’S “Portraits & Pantheons in Korean Art” offers a rare opportunity to see extraordinary portraits of late Joseon Dynasty (1392-1910AD) civil court officials, Buddhist priests, and deities rendered in full-length scrolls, album paintings, and wooden sculptures. At Mark Murray Gallery, 39 East 72nd St.
ERIK THOMSEN presents “Japanese Paintings: Screens and Scrolls from the 17th through the 20th Centuries,” including Plovers Flying over Waves by Suzuki Kinji, on a two-panel screen referencing a poem in the famous poetry anthology Kokin Wakashu. At Eric Thomsen, 23 East 67th St.
CHAMBERS FINE ART includes a large-scale installation by Wu Jian’an, one of china’s most celebrated emerging artists. For his creation, the artist uses thousands of cut-out forms derived from Chinese mythology. At Chambers Fine Art, 522 West 19th St.
JOAN B. MIRVISS LTD. Presents “Approaching the Horizon: Important Japanese Prints from the collection of Brewster Hanson, among them some of the most coveted designs by Katsushika Hokusai, such as Amid a Waterfall on the Kisokaido and other masterworks assembled from around the world. At Joan B. Mirviss, Ltd., 39 East 78th St.
THE CHINESE PORCELAIN COMPANY exhibits “Transcending Reality: New Ink Paintings by Tai Xiangzhou,” who is well-known for his dedication to ancient papermaking and for his exclusive use of 18th-century ink and his deft command of materials evident in his landscape paintings reveal the romance between ink and paper. At The Chinese Porcelain Company, 475 Park Ave.
Ta Ta Darlings!!! This was just a small sampling of Asia Week in New York. There are auctions at Bonhams, Christie’s, Doyle and Sotheby’s, lectures and book signings at the China Institute. Gallery Talks at The Korea Society, Brooklyn Museum, Rubin Museum, the Arts of Pacific Asia Show, the Japanese Art Society of America (JASA) on Deco Japan, and symposiums and gala events. Not to be Missed! Asia Week in New York is a rare opportunity that is both educational and entertaining.