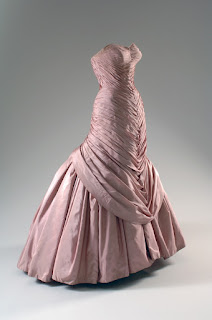 New York City the fashion capital of the world plays host to yet another fashion review, an Abstract master delves into shapes and color and the ancient past rises up at a venerable museum. All this week, my friends. The Very Best of New York. Here’s the scoop!!!
FASHION, A-Z: HIGHLIGHTS from the COLLECTION OF THE MUSEUM AT FIT-Part Two, showcases some 60 fashions from the museum’s permanent collection. Of more than 50,000 garments and accessories. The items on display will be featured in the "Fashion, A-Z” book due out this fall by Taschen. Part Two, which will be on view through November 10, 2012, features fashion s organized alphabetically--- from Adrian, Balmain and Comme des Garcons all the way through the alphabet---to give visitors a sense of the modern and contemporary fashions that shaped the fashion mindset of admiring fashionistas. What appears to be an engineering feat, the Charles James Tree dress (1955), pictured here, is one of the main attractions at the museum, which has one of the largest collections of his pieces. Meticulous to the point of creating structural garments, James only produced only 1,000 garments during his decades of designing. Other pieces include a Madeline Vionnet bias cut, 1936 evening dress, a 1961 Arnold Scaasi cocktail dress and a 1981 pirate ensemble from Vivienne Westwood. At The Museum at FIT, Seventh Ave. at 27th St. FREE fitnyc.edu/museum.
ELLSWORTH KELLY’s DRAWINGS of Plants, Flowers, Leaves—Spanning 60 years—includes his first ‘Plant Drawings’ made in Boston and Paris in the late 1940s. Ranging from seaweed suspended in his studio, to a flower discovered on the road side, to a single banana leaf examined at close range, Kelly’s renderings of plants ---he likens them to portraits---are precisely observed studies of forms in nature. “The most pleasurable thing in the world, for me, “ the artist once said, “is to see something, and then translate how I see it.” The selection of approximately 75 drawings begins in 1948 during Kelly’s early sojourn in Paris and continues throughout his travels to the most recent work made in upstate New York. Shape and color his two strong points. At the Metropolitan Museum of Art, opening June 5-Sept. 3, 2012. http://www.metmuseum.org/.
ANTICO: THE GOLDEN AGE OF RENAISSANCE BRONZES Sojourn over to the Frick Collection to see Renaissance master, Pier Jacopo Alari de Bonacolsi (1455-1528). He merely signed himself “Antico” to underscore his penchant for ancient Classical art, which as being unearthed in Italy during his lifetime. The exhibit includes some 39 sculptures, life-size busts, reliefs and medals that represent his high level of artistic refinement and historical reproduction. He was the first Renaissance sculptor to specialize in bronze statuettes and the first to employ lavish gilding in his work. Antico’s large bust of “Bacchus” reveal the sculptor’s naturalistic rendering of contrasting textures is a serenely splendid work. Just walking through the inner garden courtyard of the Frick is worth the visit. Through July 29, 2012. http://www.frick.org/.
CHURCHILL: THE POWER OF WORDS Sir Winston Churchill’s impact upon the twentieth century is difficult to overestimate, as is the effectiveness of his oratory and writings. The Morgan Library & Museum explores this fascinating aspect of Churchill’s life and legacy in an exhibition that covers more than half century of his life—from Victorian childhood letters to his mother, to Cold War correspondence with President Eisenhower, and features some of the most famous wartime oratory. The Power of Words uses sixty-five, drafts, speaking notes, personal and official correspondence, public statements and official recordings to examine the main events of his life. Of particular focus is Churchill’s lifelong relationship with the United States, and the ways in which he used the written and spoken word to develop, complement and advance his political career. Of course, you know that Churchill’s mother, the beautiful Jennie Jerome, was born in Brooklyn, New York. http://www.themorgan.org/.
Ta Ta Darlings!!! I’m counting on getting inspired by words and Kelly’s plant portraits. Fan mail welcome www.pollytalk.com. Visit Polly’s Blogs at www.pollytalk.com and in the left-hand column click on the Blog that interests you from fashion to poetry and visionary men.