Manhattan is a buzz with design inspiration from a Decorator Show House to graphic design on an island and music in a great hall, these are the wonderful venues that make New York the center of the cultural universe. Here’s the scoop!!! 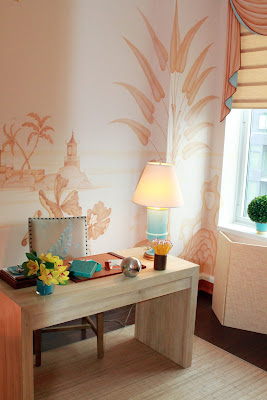 KIPS BAY DECORATOR SHOW HOUSE, 40th Anniversary launches an exciting new chapter by breaking the tradition of presenting the decorator show in a tony uptown town house, and has moved the show to the Aldyn, the two stunningly modern high-rise spaces on Riverside Boulevard, between 62nd and 63rd Streets, overlooking the Hudson River. Not only is the new space worth visiting for the sheer enjoyment of seeing decorator concepts at their best, for the public viewer, the show is a treasure trove of inspiration. The 30-some designers did not disappoint. My favorite is the Writing Room by Chuck Fischer Studio Inc. He pulled the desk off the wall and opened the room up with peachy terra-cotta walls and neat idea; he hid the big white AC unit behind a folding screen. Alexander Doherty Design is a proponent of hanging paintings salon-style, 11 exactly, in new ways of living with and hanging art. The show house is open to June 14, Mon., Wed., Fri. & Sat. from 11-5 pm, Tues. & Thurs. 11-8pm, and Sun. 12-5pm. The show house benefits the Kips Bay Boys & Girls Club. 212.755.5733.
GRAPHIC DESIGN—NOW IN PRODUCTION at Governors Island through Sept. 3, 2012 is co-organized by the Smithsonian, Cooper-Hewitt, National Design Museum and the Walker Art Center to explore some of the most vibrant graphic design work produced since 2000. Just hop on the free Governors Island ferry, which departs from the Batter Maritime Building at 10 South Street. It’s a mere 7 minute ride and just as you disembark to the right is the entrance to the exhibition. Graphic Design is yet another challenge to educate, inspire and present the worlds of design-driven magazines, newspapers, books and posters, the expansion of branding programs for corporations, institutions and subcultures. The ambitious presentation looks at the cutting edge and breaking cultural design in the 21st century and insight into the phenomena shaping culture today. FREE
ART OF ANOTHER KIND: International Abstraction and The Guggenheim, 1949-1960 explores international trends in abstraction in the decade before the Guggenheim’s iconic Frank Lloyd Wright-designed building opened in October 1959, when vanguard artists working in the United States and Europe pioneered such influential art forms as Abstract Expressionism, Cobra and Art Informel. Comprising approximately 100 works by nearly 70 artists, the exhibition represents works by Karel Appel, Louis Bourgeois, Willem de Kooning, Isamu Noguchi, Jackson Pollock, Zao Wou-Ki , among others. Abstract Expressionism encompasses a diverse range of postwar American painting that challenged the tradition of vertical easel painting. Pollock for one placed his canvases on the floor to pour, drip, and splatter paint onto them. Other painters eliminated the gestural stroke altogether. Rothko used large planes of color, often to express universal human emotions and inspire a sense of awe for a secular world. Opens June 8th to September 12, 2012. Solomon R. Guggenheim Museum, 1071 Fifth Ave. guggenheim.org/anotherkind
BIG APPLE BARBECUE BLOCK PARTY at Madison Square Park will be bursting with the aroma of Barecuin’ribs, racks and rubs brought to you by 18 of the countries preeminent pit masters on Saturday and Sunday, June 8 & 10th. It’s a one-of-a-kind New York City experience. Check this out you can support the Park and skip the lines with a limited-run Mad. Sq. Park Passes! For price information contact info call: 212.528.1884
Ta Ta darlings!!! Take the trip to Governors Island ferry and whizz over to see Graphic Design, you’ll be glad you. Fan mail welcome pollytalk@verizon.net and visit Polly’s Blogs on the Internet at www.pollytalk.com and in the left hand column click on the Blog that interests you.