INTO THE DEEP, BREWING CULTURE and SERENITY(c) By Polly Guerin 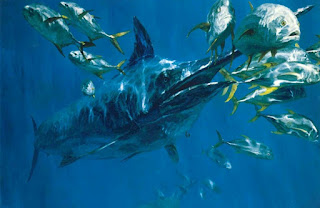 Man bait seems to be in New York’s cultural venue this week. Game fisherman and ladies need go no further than NYC to adventure into the deep, or drink of the popular Brew, revisit the Triangle Fire and end up in the serenity of water lily gardens at the NYBG. Here’s the scoop!!!
STANLEY MELTZOFF: OCEAN AND OTHER WORLDS No need to go to the aquarium. Giants of the Deep are the subject of the world’s finest game fish and sport painter, Stanley Meltzoff’s one-man show at the Museum of American Illustration in New York City. This celebrated artist opened the frontier beneath the surface of the seas bringing to life breathtaking images of striped bass, bluefish, sailfish and other exotic species seemingly swim out of the painting into visual view with lifelike wonder. PHOTO CREDIT: Stanley Meltzoff, Black Marlin 9, Marin and Trevally 1989. He learned how to paint his seascapes as a diver and recorded salt water game fish, cataloging them at a time when both the oceans and these spectacular fish are fast disappearing. The fish painter honed his skills and produced works for major magazines including Scientific American, Field & Stream, Life and National Geographic. On view are original paintings from the artist’s estate (Meltzoff 1917-2006) through August 18th at the Society of Illustrators, 128 East 63rd St., open to the public FREE of charge on Tues. 10-8; Wed.-Fri., 10 am-5 pm; Sat. 12-4 pm. 212.838.25760.
IN PURSUIT OF GIANTS, a new book by Matt Rigney, with his love for sport fishing, coincidentally addresses the subject of these great fish that are fast disappearing. Rigney covers the causes including commercial fishing and industrial methods which take the sport out of it drastically depleting stocks. With romantic reverie he records, “With switchblade fins and tails able to propel them 70 miles per hour, they course through the dark tides, unseen, the last truly great fish of our oceans in time will disappear.” Published by Viking, $26.95.
BEER HERE: BREWING NEW YORK’S HISTORY…and a bar in the NYHS, New York Historical Society’s museum ought to send beer aficionados to the exhibit that extols the long tradition in New York of brewing and drinking beer and a bar has been created in the gallery. After ambling though a history that begins in the 17th century to the present, by way of 14 present-day local brews offered to taste. In Colonial days beer was safer than water and during the Revolutionary War, troops received beer with their rations. The temperance movement that led to Prohibition from 1920-33, gets its due coverage as does the election of “Miss Rheingold “in the 40s and 60s when a series of bombshells courted the votes from posters in subway trains. So drink and be merry tapping into beer history at NYHS, 77th Street and Central Park West.
TRIANGLE FACTORY FIRE: THEN, SINCE, NOW an exhibition by the Fashion Institute of Technology’s graduate students takes us back again with a visual interpretation of the Triangle Factory Fire in 1911, its impact, and its aftermath in works executed in gouache, oil paint, clay sculpture, collage, and digital media. FREE open to the public at the Museum at FIT, 27th St. and 7th Ave. Tues.-Fri. noon to 8pm, Sat. 10-5 pm.
MONET EVENINGS FEATURE WATER LILY CONCERTS The New York Botanical Garden invites you to enjoy a complimentary specialty cocktail while viewing Monet’s Garden in the Enid A. Haupt Conservatory. This re-creation of Claude Monet’s idyllic garden in Giverny, France, features evocative set pieces depicting Monet’s Grade Allee and iconic footbridge surrounded by willow trees, bamboo groves. Monet’s most famous subject, water lilies, grace the Conservatory courtyard pools. Relax on the Conservatory lawn and listen to music July 19, August 16 or Sept. 22. Light picnic fare available for purchase and a cash bar available. Make the evening a night to remember. Take the Metro North train from Grand Central to the NYBG.
Ta Ta darlings!!! Oceans and Other Worlds is a ‘must see’ exhibit. It’s breathtaking imagery of the great giants of the deep. Fan mail welcome pollytalk@verizon.net. For Polly’s Blogs go to www.pollytalk.com and in the left hand column click on the links to poetry, fashion or amazing women determined to succeed.