CULTURAL MEDLEY, IT'S ALL ABOUT CHILD'S PLAY(c) By Polly Guerin 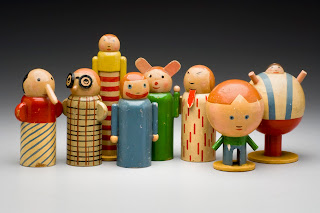 There’s more than meets the eye in cultural venues this week; a chance to remember when child’s play was fun then ‘play well,’ and spend the lunch hour at the library. It’s the Best of New York, my friends, the very best of children's venues to entertain and stimulate your senses. Here’s the scoop!!!
CENTURY OF THE CHILD: Growing by Design, 1900-2000 invites you to learn how designers had fun creating toys, furniture, playgrounds and school architecture. The Museum of Modern Art’s ambitious survey of 20th-century design for children is the first large-scale overview of the modernist occupation with children and a growing movement to advance the well-being of children by ending child labor, reforming education and encouraging emotional development through creative play. Hundreds of works on view, from designs by Charles Rennie Mackintosh to elements from Pee-wee’s Playhouse include my favorite: American Modern Play Dishes replicating in miniature melamine play dishes by America’s Best Known designer Russel Wright, “It’s fun to serve your friends in real Russel Wright dishes…just like mother’s,” produced by the Ideal Toy Corp. Screenings include 400 Blows, Bicycle Thieves, The Virgin Suicides. Check schedule at MOMA 11 West 53rd St. Through Nov. 5, 2012. IMAGE: Minka Podhajska ( 1881-1930) (Czechoslovak, born Moravia (now Czech Republic).  Series of Personifications of Childhood Misdeeds, 1930. Painted wood, dimensions vary. Museum of Decorative Arts, Prague.
ORBIS PICTUS: Play Well,transforms the Czech Center gallery into a symbiotic playground of site-specific installations in which artists and children collaborate to create sound and motion and visual installation. Over the course of sixteen weeks adults and children alike will come together to stage happenings, both free form and through a series of events, workshops, and concerts that draw upon the instinctual play’s ability to spark imaginative growth and unite disparate individuals through non-verbal communication. Play Well, the gallery of the Czech Center New York will become an artistic workshop and sonic landscape, where through direct physical contact with the artworks participants will create a symphony of light and sound. At the Gallery of the Czech Center New York, Bohemian National Hall, 321 East 73rd St. through October 17, 2012.
LUNCH HOUR at the New York Public Library “Everything is done differently in New York from anywhere else—but in eating the different is more striking than in any other branch of human economy,” said George Foster, New York in Slices, 1849. He was right on target, the clamor and chaos of lunch hour in New York has been a defining feature of the city for some 150 years. Of the three meals that mark the American day, lunch is the one that acquired its modern identity here on the street s of New York. Nowhere was he change more dramatic than right here in the city where employees were given a fixed time for their midday meal, often a half hour or less. Lunch Hour NYC looks back at more than a century of New York lunches, when the city’s early power brokers invents what was yet to be called ‘power lunch,’ local charities established a 3-cent school lunch, and visitors with guidebooks thronged Times Square to eat lunch at the Automat, a section is replicated in the exhibition. FREE Through February 17, 2013. For information call 917.ASK.NYPL (917.275.6975.
Ta Ta Darlings!!! Take time for child’s play to stimulate your creativity, these exhibits are worth seeing. Fan mail welcome www.pollytalk.com. Visit Polly’s Blogs at www.pollytalk.com and in the left-hand column click on the Blog that interests you from fashion to poetry and visionary men.