CULTURE CITY and ITS RICH VENUES (c) By Polly Guerin 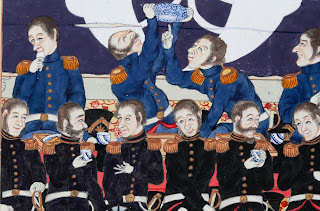 The treasure trove of cultural venues this fall fills the calendar with not-to-be-missed opportunities to acquire fuller knowledge on a scale from A to Z. Well you can’t help a girl wanting to improve her mind. Here’s the Scoop!!

THE 24TH ANNUAL INTERNATIONAL FINE ART & ANTIQUE DEALERS SHOW The New York Times once described the IFAADS show as “a sprawling cabinet of wonders, an awesome hodgepodge of rare, beautiful and strange objects.” Fair description for the myriad of works or art, craft and design displayed represent a wide array or periods at price points from A to Z. However, the show is known for its high quality standards of quality. The world renowned “International Show,” founded in 1989 as New York’s first vetted fair; it was the first to require that all objects be authenticated by a panel of experts. This year’s show brings together 67 top American and European dealers featuring works of art, antiquities to contemporary including furniture, paintings rare books, jewelry, Faberge, maritime, textiles and ceramics. From October 19th through 25th at New York’s Park Avenue Armory at 67th St. Daily 11am-7:30pm. Last day Sunday 11am-6pm. Admission $20. For information about the preview party phone: 212.642.8572.
IMAGE: Daniel Crouch Rare Books exhibits an outstanding handscroll depicting Commodore Perry’s historic visit to Japan in 1854.
PICASSO BLACK AND WHITE They seek him here they seek him there, Picasso seems everywhere this year and The Solomon R. Guggenheim Museum’s presents another lesser-studied aspect of Picasso’s work, his use of black and white and gray. It’s an once-in-a-lifetime opportunity to see 118 black and white paintings, sculptures, and works on paper by the great Spanish artist, many of which are on public view for the first time, including “Mother and Dead Child II, Postscript to Guernica and Head of a Woman, Right Profile (Marie-Therese) oil and charcoal on canvas. Many of the works are on loan from the Picasso family. By working in black and white Picasso once said color ‘weakens.’ This is a new way to see Picasso and it shows how much he said with little. Through January 2013. Programs include the October 14th and 15th performance of Picasso’s Desire Caught by the Tail. At 1071 Fifth Ave. (at 89th Street) Phone 212.423.350
MASTER DRAWINGS FROM MUNICH The Morgan Library & Museum hosts an extraordinary exhibition of rarely-seen master drawings from the Staatliche Graphische Sammlung, Munich, marks the first time that that such an important group of drawings has been lent to an American Museum. The exhibition includes drawings from Italian, French, Dutch and Flemish artists of the Renaissance and baroque periods; German draftsmen of the nineteenth century; and an international contingent of modern and contemporary craftsmen. Among the artists represent are Willem de Kooning, Max Liebermann, Franz Marc, Johann Georg Bergmuller and Leonardo da Vinci. Through January 2013. Madison Ave.@ 36/37th Street.
EDVARD MUNCH’S ‘THE SCREAM’ This is a rare opportunity to see Edvard Munch’s iconic The Scream (1895) among the most celebrated and recognized images in art history, it goes on view at The Museum of Modern Art for a period of six months beginning October 24. Of the four versions of The Scream made by Munch between 1893 and 1910, this pastel-on-board from 1895 is the only one remaining in private hands. The three other versions are in the collections of museums in Norway. “As an iconic image, The Scream has garnered worldwide attention for its start portrayal of the human condition,” said Glenn D. Lowry, director of the museum. This haunting rendition of a hairless figure on a bridge under a yellow-orange sky has captured the popular since the time of its making and now is your chance to see it through April 2013. MoMA at 11 W. 53 St.
Ta Ta darlings: Don’t miss “The Scream,” where you might discover your own meaning in the painting. Fan mail welcome: pollytalk@verizon. Polly’s blogs are best accessed on the Internet just click in the left hand column for a direct link to visionary men, amazing women, poetry or fashion.