FASHIONISTA'S HOLIDAY IN THE BIG APPLE (c) By Polly Guerin 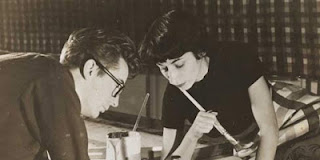 No wonder New York City is called the Fashion Capital of the World; from textiles to fashion and celebrity book signing there’s more than meets the eye in venues this week. Only in New York, my friends, the best of New York. Here’s the Scoop

THE WORLD OF D.D. AND LESLIE TILLET If you are waxing nostalgic and want to capture the glimpse of textile history The Museum of the City of New York honors the memory of the legendary textile designers, the Tillets. The D.D. stands for D.D. Doctorow who married Leslie Tillet and 60 years later, the lyrical but never-published pictures she took for a feature for Harper’s Bazaar bring the story of their collaboration to life. The Tillets moved to Manhattan in 1946, reaching a level of recognition all but unheard of in the fabric world. Their best known patterns are chrysanthemums busting like fireworks in a mélange of color. American sportswear designer, Claire McCardell included Tillet fabrics in her collections and celebrities like Jacqueline Kennedy had a favorite Tillet sundress. At MCNY Fifth Avenue between 103 and 104th Streets. (Image above: The Tillets)

MYSTERY OF EDWIN DROOD Here’s a lesson in fashion history. For its revival of “The Mystery of Edwin Drood,” the Roundabout Theater is costuming the musicians and the ushers as well as the cast of almost 30 in period costumes befitting the 1890s era—-63 hats, 33 wigs, 32 costumed house staff, 16 bustles, etc. etc. To bring the story to the stage, playwright and composer Rubert Holmes created a multiple-choice musical, whereby audience members at each performance vote for an ending which the actors then perform. Costume designer, William Ivey Long created the elaborate costumes which create a brand new way to appreciate historical fashion.

FASHION SYMPOSIUM Ivy Style will be FIT’s 12th fashion symposium, bring together diverse array of scholars, authors and designers to discuss, debate and celebrate the “Ivy League Look,” a distinctly American fashion genre that has been shaping the evolution of menswear for decades. Ivy Style has spread way beyond the university campuses where it began to become a major influence on many of today’s fashion designers including Ralph Lauren, Tommy Hilfiger and Thom Browne. You’re in for a treat. Speakers will include Richard Press, grandson of J. Press; journalist G. Bruce Boyer; designer Jeffrey Banks, Claudio Del Vecchio, chairman and chief executive officer of Brooks Brothers and Patricia Meers, FIT deputy director of the exhibition. Held in the Morris W. and Fannie B. Haft Auditorium, Marvin Feldman Center, second floor on Thursday and Friday, November 8 and 9th. Free to the FIT community and to students everywhere (with ID). To register call: 212.217.4585.

INCOMPARABLE: WOMEN OF STYLE By Rose Hartman This photographer/fashionista’s book is a photo gallery of the goddesses who populate modern glamour—-models, actresses, jet-setters, editors and celebrities, famous or obscure. Rose Hartman is a whirlwind on the New York fashion scene and I keep bumping into her at many a press opening. Earlier this year a retrospective of her work, Selections from the Rose Hartman Photography Archives, 1977-2011, was shown at the Gladys Marcus Library at the Fashion Institute of Technology. She is a force and her uncanny lens is accompanied with texts by Anthony Haden-Guest and Alistair O’Neill with 132 color illustrations by the high priestess of fashion photography. Published by ACC Editions.