IT'S A DICKENS CHRISTMAS IN TINSEL TOWN (c) By Polly Guerin 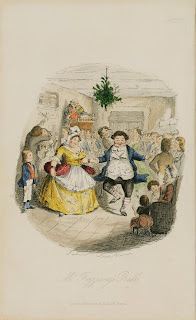 CHARLES DICKENS’S A CHRISTMAS CAROL Every holiday season, The Morgan Library & Museum displays Charles Dickens’s original manuscript of A Christmas Carol in the museum’s history library. Although Dickens wrote his iconic tale in a six-week flurry of activity, beginning in October 1843, the story still captivates the imagination of an old-fashioned celebration with conviviality and dancing. He wrote it in time for Christmas publication and had the manuscript bound in red morocco as a gift his solicitor, Thomas Mitton. The manuscript passed through several owners before Pierpont Morgan acquired it in the 1890s. During your visit travel back to Valley Forge on Christmas day, 1777, explore the impact of the handwritten manuscript of Truman Capote’s comical early story, A Christmas Vacation, and discover how the modern American concept of Santa Claus was shaped by Clement Clark Moore’s poem, Twas the Night Before Christmas. Through January 13, 2013. 225 Madison Ave, at 36th Street. Open Christmas Eve and New Year’s Eve.

CHARLES DICKENS: The Key to Character Celebrates the power of Dickens’s characters to be imagined ever anew, examining important precedent for his art of characterizations as well as intersections between his personal life and his literary creations. His fictional creations represent a cross-section of society from law-clerk to crossing-sweeper, miser to midwife all united by the vividness with which they are described. The exhibit at the New York Public Library, Schwarzman building at 42nd Street and Fifth Avenue emphasizes how these characters, talk, dress and move. The exhibition features artworks by nearly thirty illustrators, including unpublished watercolors—along with rare translations, original sheet music, and the memoranda book the author used to jot down possible names for characters. Also on display is the 1867 pocket diary containing the code with which Dickens communicated with his mistress Ellen Ternan, along with audio-visual stations featuring unusual recordings from the period collection of the Library for the Performing Arts. Now through January 27th.

CHRISTMAS TREE and NEAPOLITAN BAROQUE CRECHE A long-standing yuletide tradition in New York the Metropolitan Museum of Art present the Christmas tree and Neapolitan Baroque Crèche on view now through January 6th. The brightly lit, 20-foot blue spruce---with a collection of 18th-century Neapolitan angels and cherubs hovering among its boughs and groups of realistic crèche figures flanking the Nativity scene at its base---will delight one and all in the Museum’s Sculpture Hall. Set in front of the 18th –century choir screen from the Cathedral of Valladolid, with recorded Christmas music in the background and daily lighting ceremonies…is a breathtaking tree of historical significance, not to be missed. The Museum will be open on two special Holiday Mondays December 24 and 31 from 9:30 to 5:00 pm. Lighting ceremonies on those dates will take place at 4:30 pm.

THE HOLIDAY TRAIN SHOW at The New York Botanical Garden in the Bronx is back with more trains and landmarks than ever before. Within the enchanting setting of the Enid A. Haupt Conservatory, model trains zip over bridges and past replicas of New York landmarks made of plant parts such as nuts, bark, and leaves. Show favorites include the original Yankee Stadium, The Statue of Liberty, Brooklyn Bridge and even the Collectors Club in Murray Hill. Bar Nights at the Holiday Train Show let you get into the holiday spirit while sipping a complimentary signature cocktail. To round out this holiday outing with a the Bar Car Nights ticket also provides discounts and offers for partner restaurants in Little Italy’s Arthur Avenue nearby. Hop on the Metro North train at 42nd Street and get off at the Botanical Garden stop, a mere 25 minute ride from midtown Manhattan.

Ta Ta Darlings!!! My favorite is the Neapolitan tree at the Met!!! Fan mail welcome at pollytalk@verizon.net. Polly’s Blogs are best accessed at her website pollytalk.com. Just click on the link in the left-hand column for visonarymen, womendeterminedtosucceed, poetry or fashion.