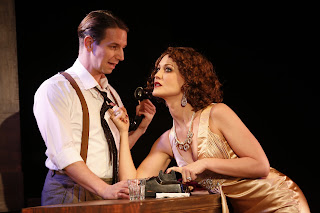 The mixed media of cultural venues warms the chill of the holiday weather to do nothing better than to get indoors and revisit Zelda Fitzgerald. It’s the best of New York, my friends, the very best. Here’s the Scoop!!! Photo Image: Edwin Cahill and Gardner Reed by Carol Rosegg.

ZELDA AT THE OASIS The riveting new drama by P.H. Lin transports use back to tormented life of Zelda Sayre Fitzgerald, the wife of the legendary American novelist, F. Scott Fitzgerald. Portrayed by the glamorous, one and only Zelda, Gardner Reed imbues the role with spit-fire imagery while Edwin Cahill in the role of the bar man, emerges as the ghost of Scott and in other guises becomes Zelda’s ballet teacher and even her mother. The director Andy Sandberg keeps the interaction of these stellar performers synergistically meshed into high drama.

Set on a magical night in the 1930s, Zelda (Reed), engagingly dressed in a stunning evening dress, is ensconced in a New York City bar called The Club Oasis, where she escapes to drink alone…until a unique and unexpected friendship is forged with an aspiring musician who plays the piano and tends bar at the Oasis. Zelda wants nothing more than to be recognized as an artist in her own right but two things stand in her way: a growing mental instability and the overbearing shadow of her husband. Reed is the personification of Zelda and captivates with her dramatization of the tragic heroine. Vivid and haunting memories are triggered as Zelda transforms the Bar Man (Cahill)into those from her past who have shaped her self-image. Encounters with the ghost of her husband Scott add to the sad lament of her yearning to be published and recognized as an author. Reed is making her New York debut as Zelda, albeit a memorable one and Cahill as the bar tender demonstrates his versatility in role playing in this after-hours encounter. In the Club Oasis they share their dreams, missteps, and insights with one another, hoping to unlock the courage to go forward in their lives.