MUSEUM TREASURES on a Smaller Scale (c) By Polly Guerin 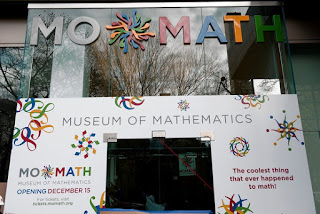 While tourists and die hard New Yorkers seems to flock to the great museums, we also have an abundance of smaller museums that are often overlooked. Why not plan a day to take in the exhibitions, where your space is not invaded and you have all the time to enjoy the collections without the jostling crowds. Here’s the Scoop!!!

NATIONAL MUSEUM OF MATHEMATICS Can mathematics be fun? You bet and Glen Whitney has come up with a formula to prove it. Mr. Whitney, a mathematician and former hedge-fund algorithm manager, raised $22 million to create The National Museum of Mathematics, nicknamed MoMath---it opened recently on East 26th Street facing Madison Square Park. It’s a museum full of surprises, the ideal venue for study and entertainment for young mathematicians and anyone who is fascinated with a world that tests you imagination. Tricycles will roll on square wells, clear plastic cubes, will reveal hexagonal cross-sections and little cars on movable racetrack will reach their destinations on routes that are not straight. The centerpiece of the museum is the columned structure called the Matenaeum, where you approach what looks like a crystal ball, and design your own three dimensional shapes. Visitors discover new things every day. Tickets purchased online cost $15 adults and $9 for children, students and seniors.
ROOMS OF WONDER, from Wunderkammer to Museum, 1599-1899 at The Grolier Club. In the 16th Century, European collectors filled special room or cabinets with miscellaneous conglomerations of items, including paintings and drawings; plant specimens; animals (including monstrosities); shells and coral; fossils, coins and medals; gold and silver objects, musical and scientific instruments and automata; the occasional Egyptian mummy and other rare and curious artifacts. Many of these “Cabinets of Curiosities” or Wunderkammer were put together by physicians, botanists and apothecaries—they were a status symbol, celebrating the wealth and intellectual power of their owners. Some of the most famous ones, for example were owned by nobles in the Medici and Hapsburg dynasties, and one the greatest Wunderkammers was formed by Peter the Great of Russia. Proud owners of Wunderkammers published elaborate illustrated catalogs to document their collection, which often ended up from private venues in public museums. At The Grolier Club, 47 East 60th street, through Feb. 2.
CENTER FOR THE HISTORY OF COLLECTING is an institution even more rarefied than any of the great museums. It is actually part of The Frick Museum, which is another wonderful oasis of serenity in a busy city. Most of the interest here is in the form of auction catalogues and photographic reproductions and for the serious collector it is a treasure trove of information. The Center for the History of Collection are organizing a symposia involving banks as collectors---from the Medici’s to the Rockefellers including a cast of other notables, the Lehmans, Morgans and Rothchilds. The Center’s most important function is as a repository for images and records about collectors, dealers and specific works of art, going back hundreds of years and the Center has started an oral history project in which collectors are interviewed.  At the Frick Art Reference Library, 10 E. 71st St., 212.547.0641.
THE MUSEUM OF RECLAIMED URBAN SPACE, MoRus,  A shrine to the East Village struggle, has been erected as something of a homage to the drama that ensued around throughout the 80s and 90s. The museum opened last month, offering tours, discussions and artwork about the neighborhood’s semi-recent radical history. Eric Drooker, the artists behind some of the most iconic images of the East Village’s era as a squatter’s haven, was on hand recently to relived some bygone moments. There were thousands of hard-core punk-rock shows there---it’s a place that has leveled off from the days when there were shooting alleys for crack addicts. Drawings by the artist Fly, of former squatters, also presented and shared stories. Parties, riots and relationships can be relived here, that is if you’re up to recalling those turbulent days. At C-Squat, 155 Avenue C, between 9th and 10th streets. www.morus.

Ta Ta Darlings!!! I’m off to visit the Cabinet of Curiosities at the Grolier Club, shouldn’t you? Fan mail welcome at pollytalk@verizon.net. Polly’s Blogs are best accessed at her website pollytalk.com. Just click on the link in the left-hand column for visonarymen, womendeterminedtosucceed, poetry or fashion.