Come out of the cold and warm up your imagination at the circus, watch a cheesy sculptor of Mount Rushmore and go to an auction of Deco history all in one week’s time to engage your senses and titillate your cultural yearnings. Only in New York, the Best of New York my friends. Here’s the scoop!!! 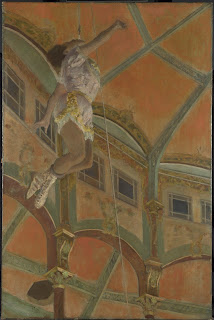 DEGAS, MISS LA LA and the Cirque Fernando: Will wonders never cease? The Morgan Library & Museum’s enchanting new show features Degas and the making of his masterpiece, “Miss La La at Paris’s Cirque Fernando,” which immortalizes a mixed race Prussian, Olga’s breathtaking act—she was hoisted to the circus’s seventy-foot ceiling by a rope clenched between her teeth. The painting was first shown at the Fourth Impressionist Exhibition in Paris in 1879 was immediately championed for its unusual subject matter and boldness of composition. In another image Miss La La holds a 155-pound cannon between her strong teeth, and never did she flinch when it went off. The exhibition brings together a rich array of related material, including preparatory drawings, pastels an oil sketch and a print of the artists, as well as books, photographs and circus programs that provide a more complete picture of Miss La la and her troupe. Madison Ave. at 37th St., through May 12, 2013.

DECO PIANO Sotheby’s is pleased to announce the sale of an exceedingly rare, long-lost grand piano by Émile-Jacques Ruhlmann from the Ladies’ Drawing Room and Music Room of one of the greatest ocean liners ever built, the Normandie, on 6 March 2013 at the 20th Century Design sale (est. $400/600,000). It has remained in the collection of the Butler family in Buffalo since it was purchased at one of the New York auctions in the early 1940s that disposed of the contents of the ship. This piano, made of ébène de macassar and American walnut with gilt bronze and ivory accents, is one of only six pianos whose whereabouts are presently accounted for, and one of three which are in his iconic, modern shape. He first displayed a piano in this shape at the 1925 Paris art deco exposition, Exposition Internationale des Arts Décoratifs et Industriels Modernes, the significant and defining moment of French art deco. Don’t miss this rare opportunity to see the piano, which will be on view in New York beginning on 2 March 2013 in advance of the sale.

LENOX LOUNGE STRIPPED BARE Deco aficionados mourn the loss of the Lenox Lounge the famed social spot in Harlem. Longtime Harlem resident Alvin Reed ran the jazz joint, which hosted guests like Billie Holiday and Miles Davis for 30 years, was forced out in January when he couldn’t pay the rent, which had skyrocketed from $3000 a month in 1996 to $l0,000 in 2012. Under the cloak of darkness men posing as cops allegedly gutted Lenox Lounge of its original artifacts. The lounge has been featured in films from the 2000 remake of Shaft to the 2007’s American Gangster. According to court papers the once proud Lenox Lounge, since its founding in 1939 was stripped bare of its Zebra wallpaper and other Deco items were torn from their fixtures. This episode, right out of a gangster movie, is a sad ending for a treasured New York icon..

THE CHEDDAR PRESIDENTS Can you imagine our presidents sculpted in cheddar cheese? For its President’s day celebration today and tomorrow, Ripley’s Believe It or Not Times Square presents a tasty bit of history. Wisconsin-born sculptor Sarah Kaufmann will carve an awesome replica of Mount Rushmore out of 160 pounds of cheddar. As an added bonus visitors will receive free samples of Cabot cheese she is using. At 234 W 42 St. Admission Charge. 212.398.3133.

Ta Ta Darlings!! Miss La La and the Cirque Fernando is an acrobat of remarkable skill, don’t miss it. Check out the Cheddar Presidents. Fan mail welcome at pollytalk@verizon.net. Polly’s Blogs are best accessed at her website pollytalk.com. Just click on the link in the left-hand column for visonarymen, womendeterminedtosucceed, poetry or fashion.