‘Built to Amaze!’ an extraordinarily engineered experience celebrates the circus as an exhilarating art form that is a creative expression of the skill, feats of daring and courage, where the fearlessness of circus performers from across the globe has no bounds of amazement. These artists let you find out what it takes to build Ringling Bros. and Barnum & Bailey’s 143 edition of the Greatest Show on Earth®. The foundation is set and the rising anticipation of high-energy, high-jinx and hilarity is ready to let you be transported by colorful circus machinery and unleashed from shipping crates right before the audience’s eyes from March 20 to April 1 at Barclays Center in Brooklyn and other locations. I didn’t think I would be amazed but with jaw-dropping reaction I joined the crowd of revelers in the cacophony of accolades.

﻿﻿ ﻿﻿ THE WONDER OF IT ALL A fantastic extravaganza with more than 110 of the world’s best performers representing 17 countries along with 95 exotic and domestic animals are assembled, creating never-before-seen heart pounding performances with magnificent elephants and even ferocious tigers taking the spotlight. Several brand new performers join the celebrated artists including awe inspiring acts, like Tower Tumblers, a troupe of competitive aerial athletes from the Ukraine who launch themselves from trampolines to scale, repel and pass through a three-story high translucent tower.

﻿﻿﻿﻿﻿﻿ ﻿﻿﻿﻿﻿﻿ THE RINGMASTER Andre McClain, Ringmaster and America’s favorite cowboy accompanied by his horse Comanche, leads the performers on a merry round of delightful surprises like the spirited and fiery competition of basketball with the next generation of whirling unicyclists. There’s something for ‘children of all ages’ and the spectacular mind- challenging show does not disappoint and offers dog lovers something to coo about. The legendary King Charles Troupe hailing from New York City and the nine-time award winning comedic animal presenting duo Alex and Irina Emelin of Russia capture your intense focus on the charming antiques of these animal clowns.

THE HUMAN CANNON BALL What’s that overhead? Feel the whoosh of the human cannonball on your face as Elliana flies gracefully overhead. Where in the world did such courage come from? Well, Elliana did not begin her circus ambition to be shot out of a cannon. She honed her skills, went to college and also studied at the Ecole de Cirque de Quebec in Quebec City, Canada, where she spent a year perfecting her circus education. Then serendipity played into her career plans when she heard about the search for the next Ringling Bros and Barnum & Bailey® Human Cannon Ball. Now at the age of 20-years-old, she is currently the youngest female cannonball in the world. 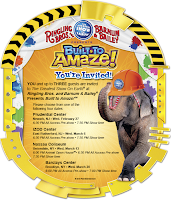 The Super Circus performances begin today March 20 and continue until Monday April 1, visit www.ringling for complete schedule. Tickets start at $20 and go up to $80 for VIP tickets. Kid (ages 2-12) $12 for select performances. Call Ticketmaster at 800.745.3000.