New York puts on a grand show with holiday windows that glitter and dazzle with futuristic themes. It’s the best show in town with acrobats scaling a luxury retailer’s façade to scenes of a nostalgic department store and video projections that transform the island of Manhattan. Now is the time to catch magic, catch the glittering show, catch the entertainment!!! It’s the best of New York and Only in New York my friends, Here’s the scoop!! 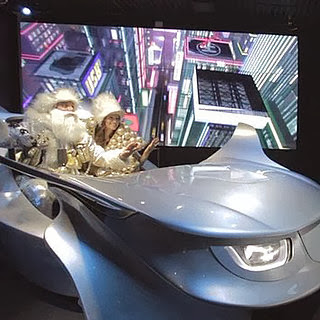 BARNEY’S entertainment has futuristic visions with performers from the improvisational group, Upright Citizens Brigade, who wear Space Age costumes by Zaldy. Christmas gets a high-tech spin where Santa and Mrs. Claus ‘virtually’ spin around the city in a souped-up sleigh that looks strangely familiar, like Batmobile. Shoppers are invited to take part by entering the actual window to ride the Santa’s sleigh. It looks like entertainment art at its most forward thrust into the future.

BERGDORF GOODMAN’S Holiday on Ice theme features icy frozen dioramas that depict holidays throughout the year, the kind that can give you glacier chills. A frozen garden party takes some dexterity to view. A window depicting July 4th takes some dexterity to view. It depicts a frozen garden party installed upside down. Valentie’s day is frozen in pink time with rich cakes and desserts and a pink fur clad mannequin seated at a desk. Outside 3-foot-high icicles adorn the windows.

LEE’S STATIONERY while these windows showcase a treasure trove of Christmas gifts, the most eye-popping display is a tall ornament decorated Christmas tree that has a constant cascade emerging from the top of the tree sending snow falling down on its branches. Inside the store every imaginable color scheme is coordinated; silver, gold, traditional red, green, even blue for Hanukkah. Charming are the toys for children and adult--- Santa’s climbing a ladder, merry-go-rounds and snow-packed sky lifts.

LORD & TAYLOR delights as usually with a traditional theme that strikes at the nostalgic note in our hearts. Elegant windows with sophisticated figures depict shoppers in 20s to 40s era fashions in a store of yesteryear, a store with fairytale images where shoppers gaily carry packages with bright red ribbons. Most endearing is ‘Holiday Cheer’ a depiction of Santa in his traditional pose waiting for children at the top of the stairs.

BLOOMINGDALES goes international and adhere to its slogan “Like no other store in the world” with large gift boxes that rotate to reveal holiday scenes from different countries. Whimsical and magical scenes from Great Britain, Italy, France and China and New York reveal holiday windows in world venues. ‘Festive Greetings from Paris’ replete with the Eiffel Tower and pink poodles. Enchantment here is at its most worldly interpretation-- it’s a storybook adventure.

Ta Ta darlings!! I’m just an old-fashioned gal, I loved L & T’s windows, but the visions planted in my head of futuristic themes were the most inventive. Fan mail welcome at pollytalk@verizon.net. Visit Polly’s Blogs at www.pollytalk.com and in the left hand column click on the link to Blogs on fashion, remarkable men and women.