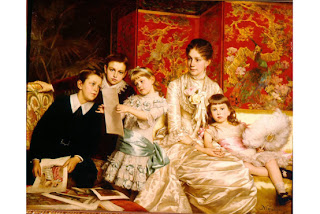 At the end of the nineteenth century New York was an unprecedented vibrant place, where the elite class expressed their high status through extravagant fashions, jewelry and the decorative arts. It was the era of Edith Wharton’s “Age of Innocence,” and the Museum of the City of New York pays homage to the gilded trip in an extravagant exhibition, “The Tiffany & Co. Foundation Gallery, “ which opened recently on the Museum’s third floor. It was during these years the United States, and its cultural capital, New York City, achieved a new level of sophistication in painting, sculpture and architecture, and when absolute decorum ruled. Image: Portrait of Cornelia Ward Hall and her children by Michele Gordigiani.

THE GILDED AGE New York had its own upstairs and downstairs when the existence of cooks, coachmen, valets and lady’s maids were deemed “de rigueur". Industrial titans, such as Jay Gould and John D. Rockefeller erected mansions that marched up Fifth Avenue. It was a display of sumptuous consumption, when, there was no income tax, enabling the nation to compete for the first time on the world stage, giving rise to the epithet of the era, The Gilded Age.

A JEWEL BOX GALLERYIt was an enviable time, but for other citizens, cut from a less fortunate 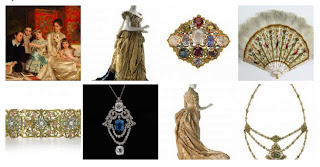 lifestyle, they could only observe how the leading industrialists vied with one another to exhibit their wealth by adoring their wives with glittering jewels and magnificent gowns created by the House of Worth in Paris. Onlookers could observe the guests attending fancy dress balls in glittering costumes or watch their horse-drawn carriages where ladies showed off rich accoutrements—on exhibit, a diamond and emerald broach worn by Metropolitan soprano Emma Eames. Walls were adorned with American and French paintings of the era’s social and financial figures. Most fetching in the gallery is the portrait of the exquisitely dressed entourage of Cornelia Ward Hall and her children by Michele Gordigiani, and Louisa Van Rensselaer Baylies by Carolus-Duran.

DOMESTIC INTERIOR The Museum’s jewel-box gallery does not disappoint but evokes a Gilded Age domestic interior with decorative wallpaper, mirrored window shutters, draperies and herringbone wood flooring, as well as an historic chandelier and fireplace mantel form the Museum’s collection. Step into the ambiance of the elegant space where display cases present the most opulent jewelry that hallmarked the rise of Tiffany & Co. and the fine craftsmanship of eye-popping jewels composed of gold, pearls, plique-a-jour enamel and diamonds.

FASHIONABLE LADIES Charles Frederick Worth, founder of the French Haute Couture, was the fashion superstar of the day. His stunning scarlet silk damask evening dress in chrysanthemum pattern showcases the trend toward a glamorous look. Decorative objects in silver and gold and elaborate silver flatware draw attention as does the artistic wares that could rival those in Europe. Silver presentation pieces marking important sporting and civic events such as yacht races grew in size and grandeur as the century progressed. Stylish interiors also included Venetian glass from Italy acquired on the Grand Tour to Europe. One of a fashionable home’s most prized possessions was fine furniture by Herter Brothers, sofas carved with high dimension roses or inlaid and gilded side chairs.

Make your way up to The Museum of the City of New York, 1220 Fifth Avenue, between 103 and 104th Streets and find out for yourself how the Gilded Age shaped the city’s metamorphosis into a cultural capital. www.mcny.org The exhibit runs through November 30, 2013.

The accompanying book GILDED NEW YORK: Design, Fashion and Society examines this period and coordinates with the

Polly Guerin is author of the book THE COOPER HEWITT DYNASTY OF NEW YORK (History Press 2012),  The Tradesmen, Craftsmen and Artisans of New York, publication date 20l5.
Posted by Polly Guerin at 8:14 AM