Summer in the city offers cultural blue bloods an opportunity to chill out in style while taking in diverse venues that captivate the spirit of those languid  halcyon days. Only in New York my friends, the Best of New York!!! Here's the scoop. 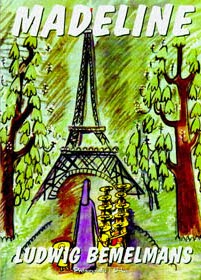 MADELINE is back in town and still has that magical quality to enchant both children and adults alike. Now 75 years later, the New York Historical Society celebrates Bemelman's storied career with "Madeline in New York: The Art of Bemelmans, which opens July 4th...a great day to celebrate the holiday and the iconic book. It all began when Ludwig Bemelmans took his daughter, Barbara, on a trip to France that the fortuitous trip partly inspired him to write Madeline---and little did he know that "In an old House in Paris..." would become an opening line for the ages---nor did he know that the book series would become a classic.The exhibit includes 90 drawings, paintings, and memorabilia and enchanting familiar scenes of Madeline's escapades in Paris. You will also get a rare view of the artist's works including drawings of the old Ritz Hotel in New York and illustrated panels from Aristotle Onassis's yacht. And while you're in a nostalgic mood why not hope over to the Carlyle hotel and  imbibe a libation at the Bemelman's Bar where the artist's folkloric other works are the decorative scenery.
GARRY WINOGRAND the Bronx-born photographer's iconic black-and-white images of mid-century American life comes to full view at The Metropolitan Museum of Art in a major retrospective showing the late photographer's iconic work. Documenting as it does the the tumultuous sixties the exhibit  focuses on  images of upheaval and renewal projected through his viewfinder, which framed both the optimistic art and the go-go hustle of the times. According to Nick Remsen in July Vogue, "There's an unmistakable frozen-in-time vitality to Winogrand's work, whether his focus was on homeward-bound fliers fresh off their DC-8s at Idelwild Airport (now JFK) or Gotham's rowdies night owls--and it's been a joy to see that energy and exuberance channeled on the catwalk." You will see familiar fashion icons like Miu Miu's candy-colored vinyl outerwear, Gucci's separates dyed in the hues of sun bleached Formica, and Saint Laurent's glittering knee-high boots. When it's time to chill out try the Met and its many splendid exhibits.
YVES SAINT LAURENT, the MOVIE, brilliantly captures YSL's shyness, charm, and artistic bravado. Pierre Niney (a YSL clone) morphs into the role with so much as a wrinkle.  Drawing upon vast archive of original material (made available to the production by 83-year-old Pierre Berge) director Jalil Lespert puts the designers' groundbreaking work on screen.  Still gloriously beautiful are YSL's Mondrian dresses that were a huge success worldwide, tuxedos  for women, pea coats, and peasant blouses. The film is not without sadness as it poignantly films both YSL's vibrant success and downward spiral. Least we forget, the young design genius left French Algeria as a teenager to work for Christian Dior, took over Dior at the are 21 in January 1958; and he and his partner, Pierre Berge, famously launched their own fashion label in 1962, the rest is history. At the FILM FORUM through July 8th.
MoMA's SUMMERGARDEN and MoMA nights announces a lineup of free live music events in the Abby aldrich Rockefeller Sculpture garden, opening with a free concert series for four Sunday evenings. Members of the New Juilliard Ensemble perform on July 6. 13, 20 and 27, offering two distinctive programs of contemporary compositions.  Jazz at Lincoln Center has selected two jazz groups---on July 13 (Jonathan Ragonese Ensemble) and July 27 (Helen Sung Quintet) emphasize original works, each with one New York premiere.  On Thursday evenings in July and August, the Museum's MoMA Nights---a series of musical performances begins July 3 when the Sculpture Garden opens at 7 p.m. and concerts begin at 8 p.m. in the Sculpture Garden free with Museum admission. Musical acts for the MoMA nights series feature an array of vibrant, creative women who are making their mark on today's music scene.
Ta Ta darlings!!! I've had my vicarious thrill and bought the Yves Saint Laurent catalogue of the YSL exhibition held at the Petit Plais/Musee des Beaux-Arts de la ville de Paris, in 2010. Fan mail welcome at pollytalk@verizon.net. Visit Polly's BLOGS on fashion visionary men, amazing women, poetry and hidden treasures on www.pollytalk.com, click on a Blog link in the left hand column of the homepage.
Posted by Polly Guerin at 7:35 AM