The golden age of Cultural Clubs may have been at its zenith at the turn of the century, but today there is a wealth of knowledge to be had by being a joiner. Socializing in a clubby manner is an opportunity to not only improve one's historical knowledge but it also provides a very pleasant way to enjoy an evening and perhaps make new friends. There is something for everyone's literary interest and this is the first of my reports, there will be more to come. Here's the scoop!!! 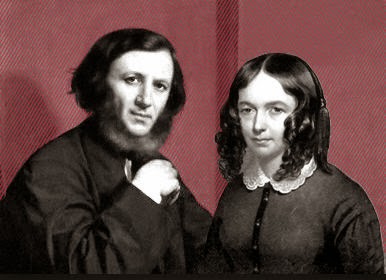 NEW YORK BROWNING SOCIETY Robert and Elizabeth Barrett Browning's poetry still resonates today not only with scholars but with New Yorkers seeking knowledge and entertainment.. While most neophytes may remember Elizabeth's matchless love poems, Sonnets from the Portuguese, she was not only a poet but spoke out in verse against slavery, child labor and the treatment of women. Robert on the other hand was a seeker of truth and his strong spiritual underpinnings are evident in his poetry. Rich and varied programming examines the poets' lives with celebrated presenters including Pulitzer Prize winners and leading figures in the worlds of arts, letters, and entertainment. The Society meets at 1 p.m. at the NAC, National Arts Club, 15 Gramercy Park South @20th St,, second Wednesdays, October through April with an annual luncheon held in May. It also sponsors an annual contest for high school students in New York City. The only requirement for membership is your interest in learning more about the Browning's and their world. Membership: contact the New York Browning Society c/o NAC.
GINGOLD THEATRICAL GROUP, Project Shaw:: "Life is about finding yourself, life is about creating yourself." The GTG, dedicated to presenting the works championing human rights with the precepts of George Bernard Shaw, especially  resonates with the human rights and political climate today.
The plays, produced and directed by David Staller, are presented  in unique script-in-hand performances, often featuring well-known stage actors and television personalities, Mondays, January through December, at 7 pm at Symphony Space, 2537 Broadway at 95th Street.

In 2009 GTG became the first group ever to present every one of Shaw's plays--all 65--in performance. In addition to educational programs GTG is creating opportunities to bring students of all ages and Shaw together. The organization's Shaw New York Festival celebrates the motivating force behind all of Shaw's work, human rights. In 2014, GTG partnered with The Pearl Theater to present one of Shaw's most enduring and popular plays, Major Barbara. The festival includes several Shavian-themed events, a Shaw Symposium, a Critic Symposium, a Shaw concert, and a reading of one of a new play commissioned by GTG. The Golden Shamrock Gala in March is a sellout event celebrating Shaw in a unique venue.  Contact: GTG, 520 8th Ave. #304, New York, NY 10018.. 212.355.7823. www.gingoldgroup.org.
PROUST SOCIETY OF AMERICA "Remembrance of Things Past" one of the most formidable volumes of 20-th century literature, makes a case for reading Proust a "must" for literary lions. The monthly reading group run, by the Proust Society of America, is keeping the works of Proust ever present in today's literary circles at The Center for Fiction, where the group meets on a monthly basis. The organization also hosts some Proust memorabilia. . Proust is always of interest to scholars but the public at large seems to be having a revival of interest in the French writer and reading Proust again is a literary event with a social overture. In addition to the reading group, The Center for Fiction publishes a newsletter and sponsors periodic lectures. It is the depository for fiction books, many out of print and first editions and boasts 90,000 titles in their circulating library. For details on annual member of The Center for Fiction and membership in the Proust Reading Group. Contact The Center for Fiction at 17 East 47th Street, Manhattan, NY. 212.755.6710.
Ta Ta darlings!!! Pollytalk is going to the Gingold Gala March 16th, contact 212.355.7823 for details. Fan mail welcome pollytalknyc@gmail.com. Visit Polly's Blogs at www.pollytalk.com and in the left hand column click on the link to the Blog of your interest on fashion, visionary men, remarkable women, and poetry.